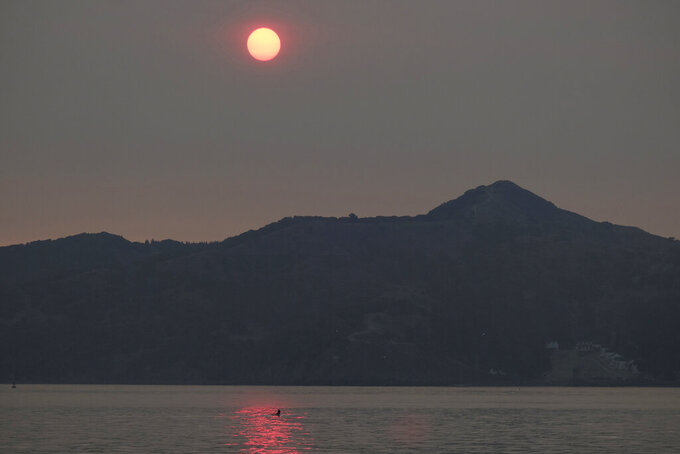 A rower goes past Angel Island and the sun rising behind in smoke from wildfires Wednesday, Aug. 19, 2020, in Sausalito, Calif. Thousands of people were under orders to evacuate in regions surrounding the San Francisco Bay Area Wednesday as nearly 40 wildfires blazed across the state amid a blistering heat wave now in its second week. Smoke blanketed the city of San Francisco. (AP Photo/Eric Risberg)

SAN FRANCISCO (AP) — Northern Californians were confronted with multiple threats as wildfires, unhealthy smoky air, extreme heat, the looming possibility of power outages and an ongoing pandemic forced many to weigh the risks of staying indoors or going outside.

Ash sprinkled the ground and smoke from several wildfires cast an eerie glow over much of the San Francisco Bay Area on Wednesday, creating unhealthy air quality and heightening concerns about people most prone to respiratory illnesses.

As ozone pollution reached unhealthy levels in some places, the region's air district and public health officials urged people to stay inside with windows and doors shut until the smoke subsided.

There was no relief in sight: the forecast for Thursday called for some of the worst air in the world, with the air quality index doubling in the densely populated parts of the Bay Area. The region's air district extended a “Spare the Air” alert through Sunday, which makes it illegal to burn wood.

Smoke can irritate the eyes and airways, causing coughing, a dry scratchy throat and irritated sinuses. Elevated particulate matter in the air can trigger wheezing in those who suffer from asthma, emphysema or COPD.

“I'm feeling lightheaded and I'm a healthy 30-year old. Imagine what it's like if you're an older person or have asthma,” said Kyle Laurentine of San Mateo. “I worry, especially in the COVID-19 era, that we're in a state of respiratory vulnerability.”

But with a statewide call to conserve energy to avert another rolling power outage, people sweltering in a prolonged heat wave and surrounded by smoke must choose between cranking their fans and air conditioners or shutting them down to conserve energy.

“These disasters need solutions that are in direct conflict with each other," said Jennifer K. Balch, a fire scientist at the University of Colorado. “COVID-19 is forcing us outside to reduce transmission risk while extreme wildfire smoke is forcing us back inside where the air is better. We’re running out of options to cope, under the weight of compound disasters.”

If it gets too hot indoors, Erin DeMerritt with the Bay Area Air Quality Management District suggested visiting cooling centers where they are available or any indoor space with filtered air while following mask-wearing and social distancing protocols.

“It’s also important to note that bandannas and masks used to protect yourself from the coronavirus do nothing to protect against smoke from wildfires,” she added.

The Bay Area has seen unhealthy levels of air pollution the last four consecutive years from smoke blowing from huge wildfires that devastated wine country in 2017 and the town of Paradise in 2018 and caused widespread evacuations in Sonoma County last year.

Wednesday's poor air quality came on quickly as the Bay Area was socked in by exploding wildfires to the north, south and east. Scientists said over the decades climate change's warmer, drier weather is making much more of California burn.

Exposure to wildfire smoke can lead to real health problems, including asthma and heart attacks, said Colorado State University atmospheric scientist Jeff Pierce, who has worked with epidemiologists on the health effects of wildfires.

“Very unhealthy” air quality forecasts usually double hospitalizations for asthma but it may be different this year with people afraid to go to the hospital because of the coronavirus, he said.

Smoke can even penetrate homes, making it hard for vulnerable people, including those sick from coronavirus, to escape, Pierce said.

Scientists said a top health concern with smoke are the fine particles that get deep into the lungs.

Recent studies from China and Europe suggest such particles can increase the risk of progression for patients who have milder conoravirus cases to more severe symptoms, he said. The particles can damage the lung lining, triggering the body’s natural immune system to overreact with inflammation to fight off a non-existent infection. In that way it makes the injury worse, he said.

Other immune system responses can also cause more problems than the smoke itself, something that can happen in coronavirus situations, he said.

The coronavirus was on Fae Gershenson's mind when she opened her 70-acre ranch to people fleeing a lightning-sparked wildfire north of Santa Cruz Tuesday evening. She had the space for evacuees' tents, stalls for their farm animals and an outdoor composting toilet to allow for physical distancing.

But when a family arrived with a 95-year-old grandmother, Gershenson said she was worried about the smoke's effect on older people and invited the woman into her house.

“We talked about how to keep each other safe; everyone's conscious about wearing masks,” Gershenson said.

She said wildfires have threatened her property in the Santa Cruz mountains a few times before, and with a neighbor helping manage her children's distance learning, she has the ability to help evacuees.

“I have no idea how people can do it right now,” she said. “I don't think it's going to be normal for quite some time.”