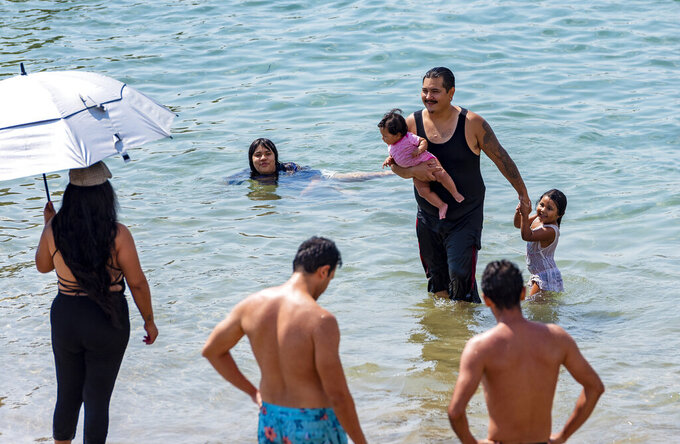 SAN FRANCISCO (AP) — California staved off another round of rolling blackouts as a searing heat wave strained its electrical grid, but authorities warned of a continuing threat Wednesday.

Grid managers again called for voluntary energy conservation during afternoon and evening hours to try to avoid having to order utilities to cut power to selected areas, which happened twice last week but has been narrowly avoided since then.

After warning Tuesday that as many as 2 million homes and businesses might be subject to rotating blackouts of an hour or more, the California Independent System Operator nonprofit organization that oversees the state power grid canceled its emergency declaration Tuesday night.

“That’s a wrap. You did it, California consumers,” the system operator tweeted, adding: “Thank you for keeping the electricity flowing.”

At a cooling center in Sacramento, Gov. Gavin Newsom praised industries, businesses and residents for driving down energy usage but warned the state was still in the midst of a “critical 48-hour period.”

“We’re doing everything in our power to understand the root causes of this,” said Newsom, who has ordered an investigation into outages that occurred on Friday and Saturday.

Outages happened in some Los Angeles neighborhoods due to overloaded distribution equipment, the city Department of Water and Power said. About 6,600 of its 1.5 million customers remained without power around sunrise.

The extreme heat was being generated by a strong ridge of high pressure over the western U.S., which also produced an onslaught of thunderstorms and lightning that ignited many of the wildfires burning in California.

Thousands of people were under evacuation orders or warnings as blazes engulfed rural and forest lands. Newsom declared a state of emergency because of the fires, easing the way to secure federal grants and out-of-state firefighting help.

High temperatures were expected to continue through the week, although forecasts called for the high pressure to gradually weaken, the National Weather Service said.

In addition to heat, an influx of monsoonal storm flow unleashed powerful downpours in the inland areas of Southern California.

Meanwhile, the wildfires spewed huge columns of smoke and made for unhealthy air, further adding to the misery especially in the midst of the coronavirus pandemic.