California tribe's brewery serves beer with side of culture 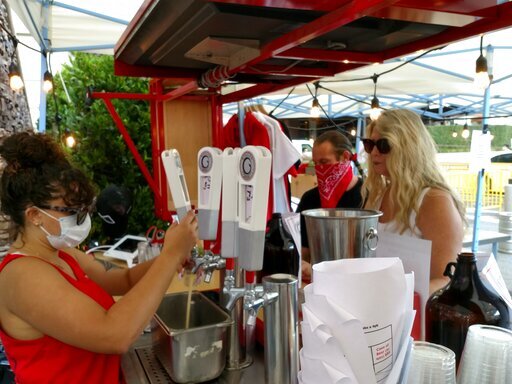 This Sept. 5, 2020, photo shows the outdoor beer garden at the Rincon Reservation Road Brewery, owned by the Rincon Band of Luiseño Indians, in Valley Center, Calif. The beer garden opened in August with COVID-19 precautions, while the full operation reopened a few months later. (Sean Curry/Indian Country Today via AP

Rincon Reservation Road Brewery sits tucked next to Harrah’s Resort just north of San Diego, ready to serve up craft beer with a side of culture.

As Southern California’s first craft brewery on tribal lands, 3R Brewery, as it’s known, aims to educate beer lovers about the Rincon Band of Luiseño Indians and inspire young tribal members with a passion for hops.

“We’ve been here over 10,000 years. We’re still here. And a lot of people don’t realize that,” said Ruth-Ann Thorn, chairperson of the Rincon Economic Development Corp., a tribal entity that oversees the brewery.

“We want to build a successful business that the tribal members can be proud of and use it as a vehicle to educate people about who we are.”

The operation is among a growing list of breweries owned by tribes and Native people, like the Yurok Tribe’s Mad River Brewery in Northern California and the Indigenous-owned Bow and Arrow Brewing Co. in New Mexico. Others include the Stillaguamish Tribe’s 210 Brewing Co. and the Chehalis’ Talking Cedar Brewery, both in Washington state.

The 3R's brews – sold in Southern California restaurants, casinos and Costco stores – are distinctly Rincon, with elements of the tribe’s language, story and landmarks, along with tongue-in-cheek nods to reservation life.

The Oasis Blonde Ale pays homage to the beautiful oasis on the reservation. Tuupash Blueberry Saison makes reference to the Luiseño word for sky. The dragonfly design on the cans embraces the tribe’s links to the San Luis Rey River. The popular Rez Dog Hefeweizen is named in honor of scrappy reservation dogs.

The tribe’s culture is also reflected in the modern design of the tasting room. Filled with Native art, 3R Brewery tells the story all the way down to the coasters, which list the name of the beer on the front and its connection to the tribe on the back.

“People get to come in to get a feel of our culture through the design in a contemporary way,” Thorn said. “People think of Native people as characters in black-and-white Western movies, but we’re not a thing of the past. We are relevant.

“We have something to give back, and this is our way of celebrating who we are as Luiseño people.”

The brewery, located in Valley Center, on the Rincon Indian Reservation, first opened in late 2016 as SR76 Beerworks. It was named by an outside marketing company after California’s State Route 76, which follows a trail used by tribal ancestors for travel and trade.

The business was not as popular as tribal leaders had hoped. By 2019, they were ready for a change.

“SR76 quite frankly wasn’t a big success; we limped along,” Thorn said. “It wasn’t really from an authentic place because we were working with a marketing firm. So, we thought, ‘Do we scrap this and call it a day? Or keep going and remain resilient?’ We are resilient. We don’t go down without a fight.”

After additional research, REDCO decided to change the name while still paying tribute to the trail that connected the tribe to the land for thousands of years. Rincon Reservation Road Brewery, as a name and brand, truly encompasses the tribe, she said.

“Everything is us – from the story of the path to the Red Diamond Rattlesnake logo, because they’re an indigenous animal and revered in our medicine because they show the resilience of our people,” she said. “Our logo is also in a circle like a basket or a wheel. It says, ‘Come with us on this journey so we can teach you who we are.’”

They also launched a canning operation to expand the tribe’s reach to outside sales, and a new brewmaster designed four beers aimed at a younger audience – the Rez Dog Hefeweizen, Chief IPA, Oasis Blonde Ale and the Red Rattler Amber Ale.

She added, “We rebranded to be more reflective of the story.”

The newly renamed 3R Brewery reopened its doors Jan. 30, 2020, just as COVID-19 was beginning to emerge across the world.

TAPPING INTO OTHER MARKETS

Like most other businesses, the company took a hit from the pandemic. Just weeks after reopening with its new name, the brewery was forced to shut down in March when Harrah’s closed the casino because of COVID.

But work continued behind the scenes.

“We were excited and had just opened up new accounts at restaurants and casinos,” Thorn said. “But we’ve tried to stay relevant through social media, and it really pushed us to do the best we can.”

During the shutdown, the brewery supplied beer for virtual tastings and hosted online happy hours. Brewmaster Matt Dale took over the operation, further expanding the lineup of beers by adding the Tuupash Blueberry Saison and Luiseño Hazy IPA.

Board members pitched in when needed to help with the new canning operation. Thorn said she aided with the canning but didn’t do the brewing.

“We kept going,” she said. “The board is a working board.”

Chairman Bo Mazzetti is proud of the brewery’s adaptability.

“These are the economic engines for the future, and COVID has put a damper on it. But the reservation isn’t going anywhere; this is our home,” Mazzetti told Indian Country Today. “Luckily, we planned for the long term, so we were able to take care of (the tribal) membership during this downturn.”

And Costco recently placed a new order. This time, the packs will be sold with individual flavors.

“It’s a good start,” Thorn said. “It’s a sort of test marketing to learn what people’s favorite flavors are. The Chief IPA has been a favorite. Mine is the Luiseño; it turned me into a beer drinker.”

'POTENTIAL FOR A GOOD FUTURE'

The brewery is also an opportunity to debunk stereotypes about Indigenous people and alcohol, Thorn said.

Not everyone supported the project, she said, but no organized opposition surfaced to stop its opening or rebranding.

“We are trying to overcome stereotypes toward Native people,” she said. “If we have a craft brewery, our tribe won’t become a bunch of alcoholics. We treat the beer the way anyone does.”

Mazzetti agreed that the brewery moves the tribe forward.

“We have the potential for a good future and something to look forward to,” he said. "Sometimes folks misinterpret things; that’s what we’re trying to fix with our beer. We want to tell our story, because the Indian people’s story is just coming out now.”

Expansion is now coming fast for 3R. The first off-reservation tasting room is set to open this summer in Ocean Beach, California – an area well-known for craft brewing.

And as a way to give back to the tribe, REDCO hopes to launch an apprenticeship program to teach young-adult tribal members and lineals the craft.

“Not everyone on the reservation wants to go to college,” Thorn said. “Lots of younger people want to learn the craft beer space. So, we’ll teach them about the chemistry that goes into beer making – because it’s more of a science than an art – and give them the ability to work with farmers, brewers and masters.”

For now, the business is still climbing back from the closure.

The opening of the beer garden in August – when the casino reopened – brought back live music and events such as movie and comedy nights, cultural music and dancing, game-day broadcasts, paint-and-sip art classes and guided hikes.

And with the reopening of the full brewery last fall, the beer garden’s tasting operation moved indoors as originally intended, though with limited capacity, social distancing and other COVID precautions in place per state guidelines.

Leaders hope the brewery will become a sense of pride for the tribe and inspiration for others.

“I would love for younger people to see that tribes are branching out into other areas, outside of gaming, and show them that there’s all these opportunities,” Thorn said.

“The time has come in all sectors for Native people to shine."