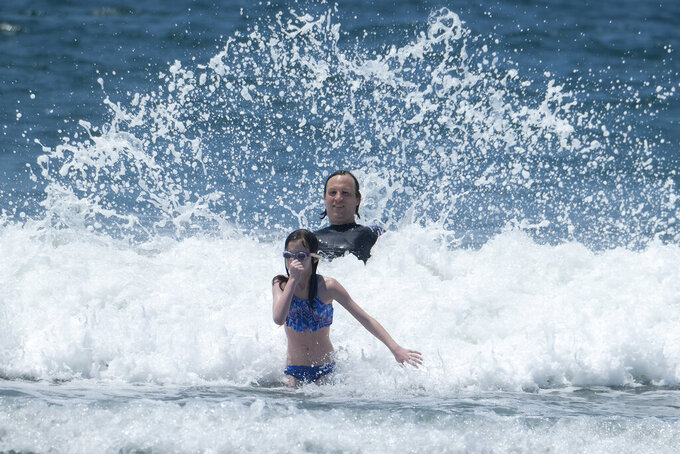 People play in the water in the heat at Santa Monica Beach on Wednesday, June 16, 2021, in Santa Monica, Calif. (AP Photo/Ringo H.W. Chiu) 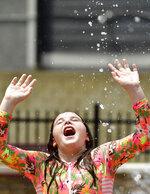 LOS ANGELES (AP) — California's power grid operator called for a second day of voluntary energy conservation and the governor declared an emergency as much of the state sweltered under a heat wave that has baked the U.S. West.

The California Independent System Operator issued a Flex Alert for 6 to 9 p.m. Friday “to reduce stress on the power grid due to extreme heat.” The alert was already in place for 5 to 10 p.m. Thursday.

During those hours, people are urged to set their thermostats to 78 degrees or higher and avoid using washers, dishwashers and other major appliances.

“Californians have stepped up many times before when asked to pitch in, and I’m confident they will do so,” system CEO Elliot Mainzer said.

Gov. Gavin Newsom on Thursday signed an emergency proclamation that suspends certain permitting requirements, allowing power plants to ramp up operations if necessary to meet the demand for electricity. The proclamation cites the “extreme heat peril” facing the state this week.

Residents in parts of Yuba and Placer counties in Northern California could experience rotating power outages through Thursday evening, Pacific Gas & Electric said. The utility didn't say how many people might be affected.

During an intense Western heat wave last August, the state saw two days of rotating power outages that affected more than 200,000 people. They were the first such blackouts since 2001.

Power officials said the electrical grid has seen upgrades in power storage and transmission since then, including adding about 3,500 megawatts of capacity — enough to power some 2.6 million homes. That includes 2,000 megawatts worth of battery storage that could be crucial when solar power generation tails off after dark.

Temperatures in the 80s and 90s were recorded up and down the state, with triple-digit highs in deserts, some mountains, non-coastal valley and interior areas.

A heat advisory was issued through Friday night for much of the San Francisco Bay Area, and several counties announced they were opening cooling centers.

Temperatures were expected to ease only slightly heading into Sunday, the official first day of summer.

The heat was due to a dome of high pressure that has covered the U.S. West. Oppressive daytime highs have been followed by very warm nights. Death Valley roasted at 125 degrees (52 degrees Celsius) on Wednesday.

The heat wave comes amid a drought that has dried up vegetation, increasing fire danger. There have been a number of small wildfires around California this week but the state avoided the kind of fierce gusts that drove last year's devastating blazes.

Even so, people should be careful, warned Pam Temmermand, a fire prevention specialist with the state fire agency's unit in Morgan Hill in the Silicon Valley.

People should not use outdoor power tools or lawn mowers that could hit rocks and create sparks, and those towing trailers should make sure the chains aren't dragging on the road, she told the Bay Area News Group.

“All it takes is one spark,” Temmermand said.

If there was any good news about the heat wave, it meant more business for restaurants, bowling alleys and other air-conditioned spots that just got state permission to abandon their coronavirus-related capacity restrictions.

Customers flocked to the Westfield Santa Anita shopping mall below the foothills northeast of Los Angeles, and they were “feeling, ‘Gosh, I can get out of those 100-plus temperatures,’” management executive Molly Unge told KCBS-TV.

Gabriel Mora, who owns an ice delivery business in Los Angeles and also sells snow cones, told the station that his business also was booming.