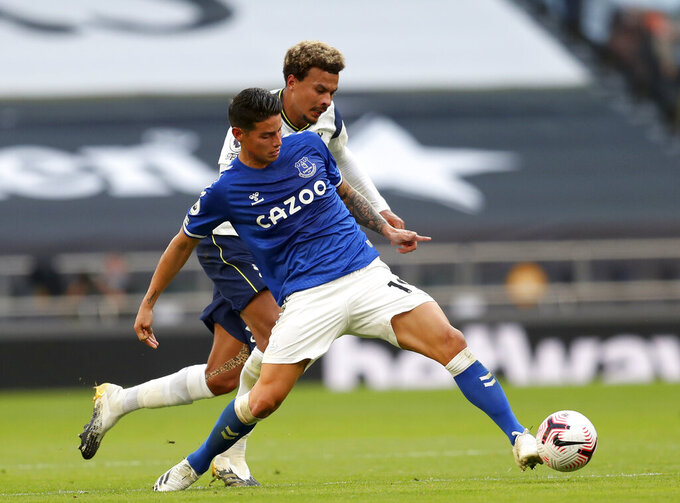 LONDON (AP) — Dominic Calvert-Lewin produced the goal and James Rodriguez provided the spark on his debut as Everton opened its Premier League season with a 1-0 win at Tottenham on Sunday.

Calvert-Lewin rose above defenders Eric Dier and Toby Alderweireld to meet Lucas Digne's free kick and power a header past goalkeeper Hugo Lloris 10 minutes into the second half.

“This game told us we can compete with everyone,” Everton manager Carlo Ancelotti said after leading the Merseyside club to its first away win at Tottenham since 2008.

Everton had squandered a far easier chance to take the lead in the first half when Richarlison missed an open goal. The Brazilian sprinted onto Ben Davies' misplaced backward pass and rounded Lloris but scooped a shot over an unprotected net from a tight angle.

At least Richarlison was getting close to scoring. Tottenham striker Harry Kane was ineffective in front of goal, with only two touches in the Everton penalty area.

It was the first time Tottenham manager Jose Mourinho — who has previously managed Chelsea and Manchester United — has lost his opening match of a Premier League season, having been unable to sign a backup option to Kane.

“Our pressure up (front) was very, very poor," said Mourinho, who finished sixth in his partial first season at Tottenham. "It was a lazy pressure and when you have lazy pressure you let opponents build from the back.”

Mourinho revealed the coronavirus — which keeps fans out of stadiums — has had a greater impact on the squad than previously disclosed.

“Harry Kane trained with us once ... Moussa Sissoko, a couple," Mourinho said. "We have the right not to say which players were, but we had players with positive COVID. We had other players in quarantine due to proximity with positive players.

Everton's biggest signing of the curtailed summer break was James from Real Madrid where he fell out of favor. And the Colombian midfielder was sharp on his debut — in only his second match since February — at the heart of the attacking threat and pinging balls with precision.

Another player who has been reunited with Ancelotti — Allan, who joined from Napoli — was also dominant in midfield against an ineffective Tottenham.

It was the first time Everton has won away at one of the top-six sides since 2013.

The victory was a sign of Everton's potential to be able to break into the European places in Ancelotti's first full season in charge of a team he dragged away from relegation danger into a 12th-place finish in July.

“Our target is to fight to reach European positions,” Ancelotti said. “We started well ... the problem that we had last season was that a lot of times we were up and down.”