Calvert-Lewin ticking all the boxes ahead of England debut 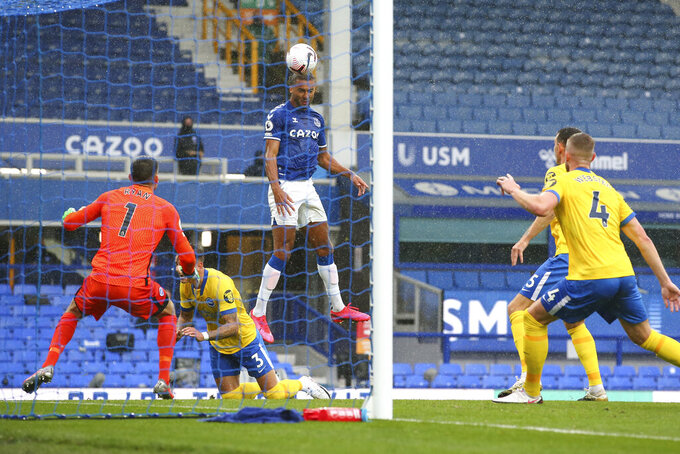 Looking the part as the dutiful new kid, Dominic Calvert-Lewin removed his flat cap and spoke politely to England coach Gareth Southgate after arriving for his first training camp with the national team.

Southgate, at a time when he is being let down by an increasing number of England players, cannot have helped but notice such a show of respect from a striker who can do little wrong at the moment.

“He is the manager of the country and that was the first time I’d seen him since arriving,” Calvert-Lewin, the top scorer in the Premier League, said Tuesday. “So I think it was out of common courtesy.”

Just a day earlier, Southgate had seen three players — Tammy Abraham, Ben Chilwell and Jadon Sancho — have their arrival to the St. George’s Park training base delayed over coronavirus concerns after attending a party over the weekend.

And last month, Southgate took the step of dropping youngsters Mason Greenwood and Phil Foden from the squad before a Nations League game against Denmark for breaching virus regulations by meeting women from outside the England team’s bio-secure bubble.

Calvert-Lewin knows the eyes of the nation are on him over the coming days as much for how he acts off the field in these fraught times amid a pandemic as for what he does on it.

“We had a welcome meeting,” Calvert-Lewin said, recalling his first day as an England squad member, “and he (Southgate) reminded us what it means and the expectations of playing for England and that you have to be extra careful in following the rules.

“That's the way it is when you represent your country.”

The 23-year-old Everton striker knows a bit about that, too.

His call-up to the senior squad is the culmination of a journey through the various England youth teams which included playing in a World Cup final for the under-20 team in 2017. He even scored the only goal in that 1-0 win over Venezuela, which — at the time — was comfortably the biggest moment of his career.

“I can remember being well onside,” he said about his winning goal, “but looking over to the linesman just to make sure I’d scored.

“But obviously for me now, I am two or three years from there and looking to kick on. It would be a dream come true to go on and be able to do that again.”

The way his career is progressing, don’t be surprised if Calvert-Lewin is leading the line for England in the senior World Cup in Qatar in two years’ time.

Already this season, he has scored nine goals — including two hat tricks — in six games in all competitions for Everton. Six of those goals have come in the Premier League, in which he has scored in all four of Everton’s matches, to climb atop the scoring chart.

It was only a matter of time before Southgate came calling, with Calvert-Lewin already on the coach’s radar given his displays for England’s youth teams. Southgate, after all, was previously coach of the under-21s before getting the top job.

“I knew what was required to make that next step, and that was to ultimately score goals and play with consistency,” Calvert-Lewin said.

“I had that belief that when I added that to my games, I would be in with a chance of getting the nod. Sometimes you get the freaks of nature who come on the scene, and they have all the ability and get straight in there. I recognize for myself, at 21, it might not be that I was ready then but I never stopped believing that I would get there eventually with the right work ethic and training.”

Earning the trust of Everton manager Carlo Ancelotti — a three-time Champions League-winning coach — has clearly handed Calvert-Lewin a confidence boost. Encouraged by Ancelotti to be more of a poacher like former Italy striker Filippo Inzaghi, Calvert-Lewin has scored all but one of his goals this season with his first touch. Most of them have been from close range, too.

There’s so much more to Calvert-Lewin, though. He is one of the hardest-working strikers in England, his hold-up play has improved immeasurably, and he might be the best in air.

“He’s transformed into a complete striker,” Everton’s Brazil forward, Richarlison, said in a recent interview with FIFA.com. “I remember when I got here he was nothing like the player he is today. It’s down to the work he’s put in.

“He’s in the gym every day, he’s always working on his finishing. And playing under Ancelotti, he’ll keep getting better and better … He must be a nightmare to play against and he has an incredible leap on him like Cristiano Ronaldo.”

Calvert-Lewin’s senior international debut should arrive in the coming days, with England playing Wales in a friendly on Thursday followed by Nations League games against Belgium and Denmark.

“So far, my performances have got me here now and it is all about consistency," he said. “There is no reason why, if I stay consistent, I’d like to think I would be in with a chance of playing in the Euros (next year), which is obviously where I want to be.”