Candidates make final push for votes ahead of primary 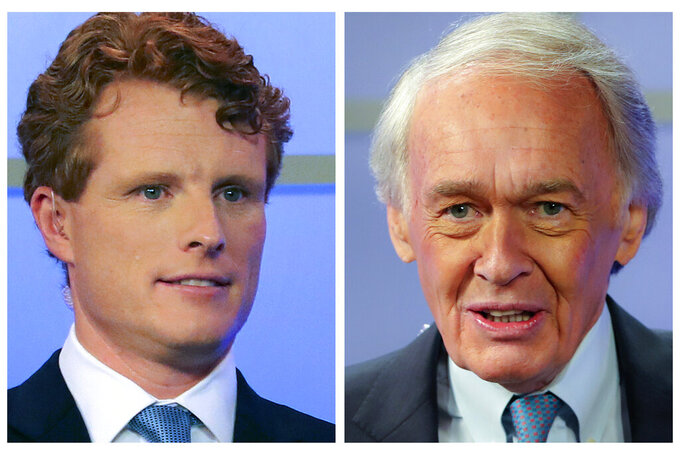 FILE - In this pair of June 1, 2020, file photos, Rep. Joe Kennedy III, left, and Sen. Edward Markey, D-Mass., right, wait for the start of a debate in Springfield, Mass. Kennedy is a candidate and Markey is the incumbent in the Sept. 1 Democratic primary election for Senate. (Matthew J. Lee/The Boston Globe via AP, Pool, File)

BOSTON (AP) — Candidates for the U.S. Senate and House scrambled to make their final pitches to voters ahead of Tuesday’s Massachusetts primary in a campaign held under the shadow of the coronavirus.

He's scheduled to wrap up the campaign with an outdoor event Monday evening at the IBEW 103 parking lot in the city’s Dorchester neighborhood.

Kennedy is hoping to become the next member of the famed political family to claim a seat in the Senate.

Markey planned a bus tour Monday with “get out the vote” events in Brookline, and the Roxbury, Mattapan, Dorchester and Jamaica Plain neighborhoods of Boston.

He plans to conclude the day with an evening drive-in rally in the city’s West Roxbury neighborhood.

Kennedy has promised “a new generation of leadership” in the Senate if elected. Markey has pitched himself as the true progressive, pointing to his introduction of the Green New Deal climate change initiative.

A number of recent polls have given Markey an edge in the race, but a Kennedy has never lost a campaign for Congress in Massachusetts. Both candidates have wrestled with the safest way to hold campaign events during the pandemic.

Tuesday’s primary will also decide the winner of the Republican senate primary pitting Kevin O’Connor, a lawyer, against fellow Republican Shiva Ayyadurai, who ran a failed campaign for Senate in 2018. Ayyadurai planned stops in Quincy, Plymouth, Barnstable, New Bedford and Brockton on Monday.

Primary candidates in four of the state’s nine congressional districts are also making a final appeal to voters.

In the 1st Congressional District, Democratic incumbent Rep. Richard Neal is trying to fend off a challenge from Holyoke Mayor Alex Morse. Neal is the longest-serving member of the Massachusetts House delegation and is also chair of the powerful House Ways and Means Committee.

In the 4th Congressional District, Democratic voters will choose from seven candidates hoping to fill the seat left vacant by Kennedy’s decision to challenge Markey.

Two Republicans are also running for Kennedy’s seat — Julie Hall and David Rosa. Both are veterans and face an uphill challenge in a district that has historically supported Democrats.

In the 6th Congressional District, Democratic challengers Jamie Belsito and Angus McQuilken are hoping to oust incumbent Rep. Seth Moulton, a Marine Corps veteran and fellow Democrat who saw combat in Iraq and who mounted a brief campaign for president last year.

While Tuesday is primary day, many in Massachusetts have already cast ballots at early voting locations, by mailing them in or by depositing them in drop boxes due to fears of spreading the virus.

Secretary of the Commonwealth William Galvin, a Democrat, said Monday that while many voters have already cast their ballots, he expects a few hundred thousand ill still show up at their polling location on Tuesday to vote in person.