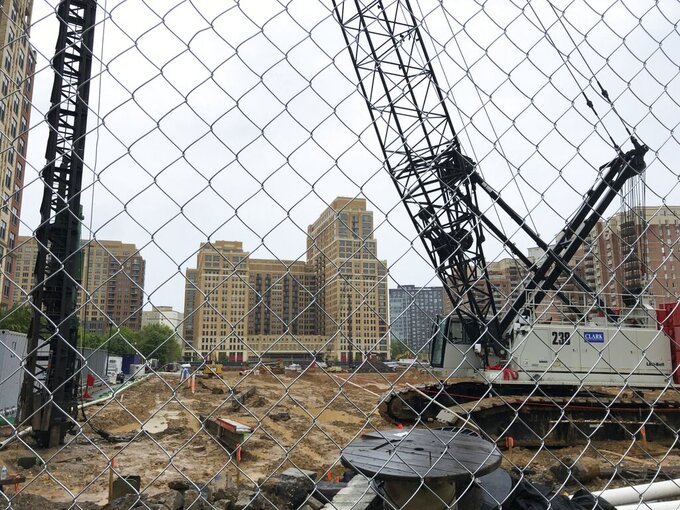 Construction is halted due to rain on Thursday, April 30, 2020 in Arlington, Va. For residents of the northern Virginia neighborhood where Amazon is building a new headquarters, the loudest construction work is occurring at the worst possible time. The relentless bang and clang of piledriving work has been going for several weeks, all while residents are forced to endure the noise as they endure stay-at-home orders due to coronavirus. (AP Photo/Matthew Barakat)

ARLINGTON, Va. (AP) — Amazon deliveries may be delayed for some folks because of the coronavirus, but construction of Amazon’s new Virginia headquarters is moving right along, with piledriving work so loud it's driving the stuck-at-home neighbors crazy.

For weeks on end, the relentless clang and bang from construction equipment preparing foundations for the online giant's new headquarters has reverberated throughout Arlington County's Pentagon City neighborhood.

Starting at 8 a.m. each weekday, residents essentially locked into their nearby high-rise apartments can't escape the nerve-rattling noise, rhythmically pounding more than 40 times each minute. All day long, they hear BOOM, BOOM, BOOM — or does it sound more like PRIME, PRIME, PRIME?

“It shakes my walls. It really is the equivalent of sound torture,” said Sue Sy, 41, who lives with her husband in an apartment across the street from the construction.

Sy started a petition asking that the piledriving work, at least, be delayed until Virginia's stay-at-home order to combat the coronavirus is lifted.

Neighbors were given notice about the noise, but that was before the pandemic altered life for Arlingtonians and everyone else. The initial expectation was that many people would be away at work during much of the piledriving, or at least be able to escape to a cafe somewhere else to avoid the pounding.

Now there is no break, and Sy doesn't understand why Amazon, which is receiving hundreds of millions of dollars in public funds to build its new headquarters in Arlington, can't be disrupted for a few weeks when everyone else's lives have been disrupted as well.

County officials say they are sympathetic. County spokeswoman Mary Curtius acknowledged that “the piledriving is relentless” and ill-timed, given the stay-at-home order.

“It's a terrible combination of circumstances,” she said.

The county has taken steps to mitigate the problem, she said. At the county's request, the construction project manager delayed the start of piledriving work from 7 a.m. to 8 a.m., and the pounding stops on weekends. But she said the county does not have the authority to halt the work.

“I am very sorry there is not more we can do about the noise at this time,” County Board Chair Libby Garvey wrote in a letter to residents.

Virginia, like other states, has carved out an exception to shutdown rules to allow construction projects to proceed, though Virginia Gov. Ralph Northam has said he expects construction companies to avoid situations in which more than 10 workers cluster in small quarters.

Sy said she’s seen evidence of workers breaking that rule and was told she can call police if she sees it again, but she has not yet taken that step. She says her landlord did hand out earplugs, but they hardly keep out the sound.

Amazon referred questions to Clark Construction, which said “We are focused on ensuring construction progresses in the safest and most efficient manner possible, while minimizing disruptions.”

Clark has told neighbors that the piledriving will wrap up around May 15, two weeks ahead of schedule. But that's just the start of what will be a massive redevelopment of the neighborhood. The county recently approved plans to use part of a nearby park as a staging area for construction equipment that will soon invade the area.

The Arlington campus could eventually be home to anywhere from 25,000 to 38,000 workers. Amazon says the average annual pay for those jobs will exceed $150,000.