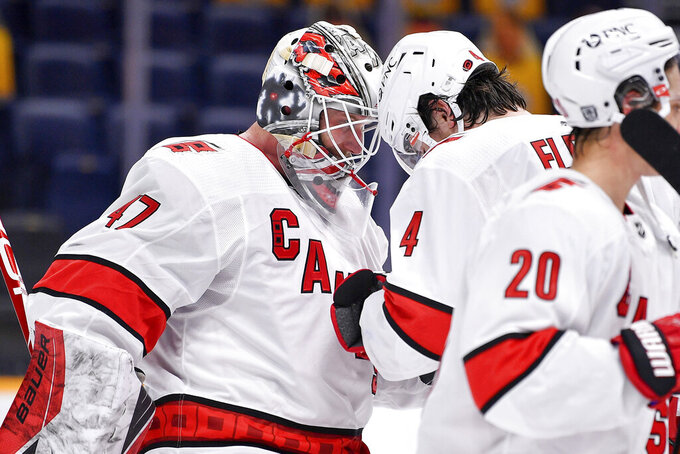 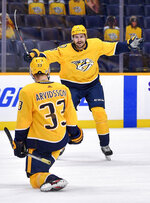 NASHVILLE, Tenn. (AP) — The NHL has postponed its first game since the league’s season began, calling off Tuesday night’s game between Carolina and the Predators hours after the Hurricanes won the first of a two-game set in Nashville.

“The decision was made out of an abundance of caution to ensure the health and safety of players, coaches and game day personnel and in consultation with medical experts,” the league said.

The NHL did not specify which team prompted the postponement, though four Hurricanes players were added to the COVID-19 list Tuesday. The NHL already postponed the start of the Dallas Stars' season after six players and two staff members tested positive for the virus.

Hurricanes players Warren Foegele, Jordan Martinook, Jaccob Slavin and Teuvo Teravainen joined captain Jordan Staal on the unavailable list because of COVID-19 protocols. Staal had been on that list since Friday, with the Hurricanes losing at Detroit on Saturday then winning 4-2 at Nashville on Monday in that span.

Nashville had forward Mikael Granlund and defenseman Luca Sbisa on the unavailability list Jan. 13 and 14 with the Predators claiming Sbisa off waivers from Winnipeg on Jan. 12. Granlund has remained on the list. He arrived Jan. 15 from Finland and currently is in quarantine.

No new Predators players were added to the list.

The NHL’s unavailability list covers multiple factors such as isolation due to a confirmed positive test or quarantines due to being “a high risk close contact.”

The league did not announce a make-up date yet. The teams aren’t scheduled to play again in Nashville until the end of the season with back-to-back games on May 7-8.

Dallas Stars coach Rick Bowness said he was making out his team’s schedule “in pencil” in case it needed to be changed. Their first four games were postponed after 17 players tested positive.

Now the Predators, who gave players Tuesday off after the postponement, are scheduled to visit Dallas on Friday night for the Stars' season opener. The Hurricanes are scheduled for their home opener Thursday against Florida, the first of six straight home games including visits from Tampa Bay and Dallas.