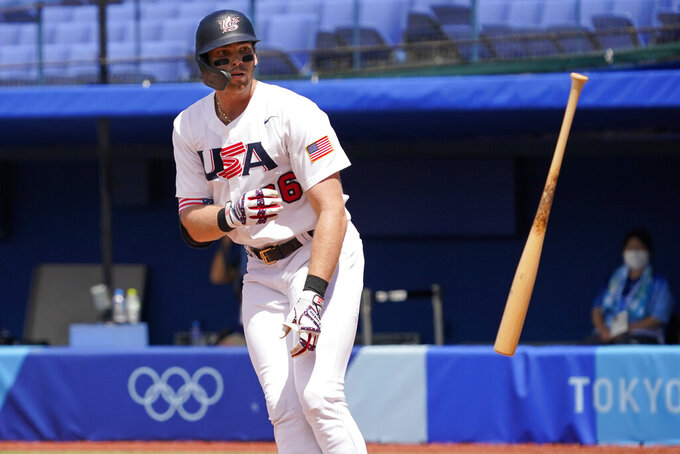 United States' Triston Casas (26) tosses his bat after a walk during a baseball game against the Dominican Republic at the 2020 Summer Olympics, Wednesday, Aug. 4, 2021, in Yokohama, Japan. (AP Photo/Sue Ogrocki)

That's because when he stepped to the plate in the United States' elimination game against the Dominican Republic on Wedesday, he was facing Boston Red Sox Double-A teammate Denyi Reyes.

“I have one career at-bat off of him in spring training, and I hit a home run over the batter’s eye, as well," Casas said after he crushed a two-run, first-inning drive that started the Americans to a 3-1 win. “So 2 for 2 with a walk.”

Tyler Austin, a former major leaguer in his home ballpark of the Central League’s Yokohama Bay Stars, added a solo home run in the fifth against Gabriel Arias, his second long ball of the tournament to go with a .412 average and five RBIs.

The U.S. (3-1) plays defending champion South Korea (3-2) on Thursday night for a spot in Saturday's gold medal game, with the loser facing the Dominicans for the bronze. Japan (4-0) defeated South Korea 5-2 to earn a spot in the title game.

Scott Kazmir (1-0) escaped a bases-loaded, one-out jam in the first. The 37-year-old left-hander pitched two-hit ball over five scoreless innings, retiring 14 of his final 15 batters around José Bautista’s leadoff double in the third.

“I felt like I still had a lot in me,” Kazmir said.

A 21-year-old first baseman at Portland, Maine, Cassas homered following a one-out walk to Austin. Cassas, batting .313 with eight RBIs, was the 26th overall pick in the 2018 amateur draft and is hitting .271 with six homers and 30 RBIs for the Sea Dogs this season.

“I wouldn’t necessarily say it’s better, but the atmosphere makes it better,” he said of the Olympics. “I feel like it puts pressure on both sides of the ball, on defense and on offense, really stay engaged in every pitch, really just trying to focus on winning. In affiliated ball, sometimes you can get out of that mindset.

“At the end of the tournament,” he added, “nobody’s going to remember really how many home runs I hit or how many runs I drive in. It’s just whether we came home with that gold.”

“We did talk about it and basically said may the best man win,” Reyes recalled of his conversation with Cassas.

Before he made two starts and a relief appearance for San Franciso in late May and June, Kazmir had not pitched in the major leagues since 2016. He hopes agent Brian Peters can get him signed for later this season or 2022.

“I have two little boys,” Kazmir said. “I want them to see me play and not just see a video or anything like that. I feel like that’s a huge motivation for me.”

Kazmir was available for the Olympics because he was assigned outright to Triple-A Sacramento on June 11.

“He fell under a rock. I think he got designated for assignment at the right time when we were about ready to make some decisions in putting our club together,” U.S. manager Mike Scioscia said. “There's no doubt he can pitch in the major leagues and be very effective, and I'm sure that's going to happen at some point.”

Kazmir startied on 16 days' rest on a broiling day with a 90-degree Fahrenheit (32.2 Celsius) temperature at game time and high humidity. With a fastball in the 91 mph range and a cutter he's developed, he threw 77 pitches, struck out five and walked one.

Playing 14 hours after their ninth-inning comeback win over Israel, the Dominicans (2-3) loaded the bases with one out in the first. Johan Mieses grounded into a forceout at the plate, bringing up Melky Cabrera, who was 3 for 10 against Kazmir in his big league career. Cabrera bounced to Todd Frazier, who stepped on third for the inning-ending forceout.

Brandon Dickson, Scott McGough and Anthony Gose followed with an inning each.

David Robertson allowed Charlie Valerio's two-out homer and a walk, then struck out Yefri Pérez with a man on for his second save. The U.S. was outhit 5-3 and overcame three errors and a 0-for-12 afternoon from its Nos. 6-9 batters.

Bautista came up with two on and two outs in the seventh against McGough, a 31-year-old former Miami reliever who blew a save against Japan two nights earlier. The six-time All-Star, now 40, took consecutive sliders and was called out by plate umpire Jair Fernández of Mexico.

“He made some good quality pitches down in the zone," Bautista said, “and he got the calls that he needed.”

Notes: Minnesota prospect Joe Ryan will start for the U.S. on Thursday. ... Dominican 2B Gustavo Núñez injured his left oblique on a swing in the seventh and was pinch hit for by Pérez.

Tetsuto Yamada, the 2015 Central League MVP, hit a tiebreaking, three-run double off the top of the 16-foot wall in left-center in the eighth inning.

Go Woo-suk (0-1) nearly was out of the inning when Kensuke Kondoh, with a runner on, hit a one-out grounder to first baseman Oh Jae-il, who threw to second. Go took the return throw from shortstop Oh Ji-hwan but couldn't get his foot on first to complete a double play, a call upheld by video review.

South Korea manager Kim Kyung-moon said the review determined Go didn't get his foot on the base before Kondoh. While South Korea thought Kondoh might have taken a turn toward second and was tagged, the manager said umpires did not consider that.

After a wild pitch, an intentional walk to Munetaka Murakami and a walk to Takuya Kai, Yamada hit a first-pitch, belt-high fastball for his second double of the game, giving him seven RBIs in the Olympics.

Hayato Sakamoto, the 2019 Central League MVP, hit a third-inning sacrifice fly for his fourth RBI of the tournament, and reigning Pacific League batting champion Masataka Yoshida added an RBI single in the fifth for a 2-0 lead.

Kang Baek-ho hit an RBI single in the sixth off 22-year-old right-hander Yoshinobu Yamamoto, who had pitched 11 scoreless innings in the Olympics. Former Orioles and Phillies outfielder Kim Hyun Soo singled in the tying run against Suguru Iwazaki.