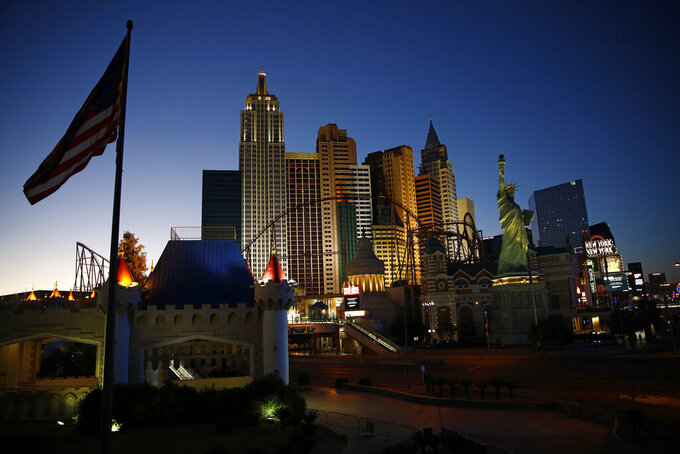 FILE - In this April 28, 2020, file photo, the sun sets behind casinos and hotels along the Las Vegas Strip in Las Vegas. Unions representing 65,000 Las Vegas-area casino workers are suing some resort operators, alleging that employees are being put at risk of illness and death due to skimpy safety measures during the coronavirus pandemic. A lawsuit filed Monday, June 29, 2020, in U.S. District Court in Las Vegas does not directly cite the death last week of Adolfo Fernandez, a 51-year-old Caesars Palace porter and union member who was diagnosed with the COVID-19 respiratory illness after returning to work when casinos reopened June 4. (AP Photo/John Locher, File)

LAS VEGAS (AP) — Unions representing 65,000 Las Vegas-area casino workers accused some resort operators on Monday of putting employees at risk of illness and death during the coronavirus pandemic by skimping on safety measures like a requirement for mask-wearing.

“They want to work, but they want to work safe,” Culinary Union executive Geoconda Argüello-Kline said of hotel housekeepers, cooks, bartenders, vehicle valets and others. “We’re going to do whatever we need to do to protect these workers, these families and this community.”

A lawsuit filed Monday in U.S. District Court in Las Vegas does not directly cite the death last week of Adolfo Fernandez, 51, a Caesars Palace porter and union member from Las Vegas who was diagnosed with the COVID-19 respiratory illness after returning to work when casinos reopened June 4 after a three-month shutdown.

However, Fernandez’s daughter, Irma Fernandez, told reporters that her father had expressed worries that he would become sick.

The lawsuit points to the experiences of employees at an eatery at Harrah’s Las Vegas, valets and porters at the Signature Condominiums towers at MGM Grand resort, and restaurant kitchen workers at the Bellagio casino.

It accuses the properties of operating for nearly three weeks without requiring guests to use masks and facial coverings to prevent the spread of the COVID-19 respiratory illness. It seeks a court order under federal collective bargaining law to force resorts to tighten safety measures.

Harrah’s operator Caesars Entertainment declined to comment about the lawsuit. A company spokesman acknowledged Fernandez’s death with a statement that didn't name him. It said officials had not determined how he contracted the virus and noted that some co-workers had been placed on paid leave in self-isolation.

Representatives of MGM Grand and Bellagio owner MGM Resorts International did not immediately respond to messages.

“Defendants recognized the critical importance of mask-wearing ... by requiring their own employees to wear masks at all times,” the civil complaint declares.

But despite “overwhelming evidence of the importance of mandating facial coverings by guests in public areas of casinos and hotels,” the document says, “defendants, along with other casinos and hotels in southern Nevada only ‘encouraged’ guests to wear face masks.”

“This irresponsible act undoubtedly led to spread of COVID-19,” the complaint said.

Nevada has reported increases in recent days in the number of people diagnosed with the virus. Just under 18,000 people have tested positive, state health officials reported Monday, and 504 have died.

Zermano, 32, said he worried about infecting his parents and said he hadn't seen his 9-year-old daughter in several weeks.

For most people, the virus causes mild or moderate symptoms for two to three weeks. The vast majority recover. Older adults and people with existing health problems can face severe illness and death.

“We’ve been very vocal in every single (venue),” Argüello-Kline said Monday. She said 19 union members or people in their immediate family have died from COVID-19 since the outbreak started in Nevada.

Sisolak last Wednesday raised what had been a health safety recommendation about facial coverings to a requirement.

“No shirt, no shoes, no mask, no service,” the governor said. “For Nevada to stay safe and stay open, we must make face coverings a routine part of our daily life.”