Cavalier White House approach to COVID catches up to Trump 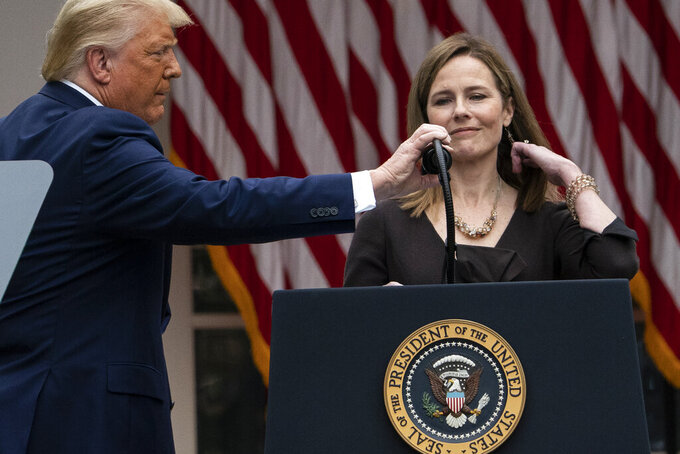 President Donald Trump adjusts the microphone after he announced Judge Amy Coney Barrett as his nominee to the Supreme Court, in the Rose Garden at the White House, Saturday, Sept. 26, 2020, in Washington. (AP Photo/Alex Brandon)

WASHINGTON (AP) — Masks were rarely spotted in the West Wing. Crowds of people gathered shoulder to shoulder on the White House South Lawn. And Air Force One streaked across the sky from one massive campaign rally to another.

With ready access to testing and the best public health minds at his disposal, President Donald Trump should have been the American safest from COVID-19. Instead, he flouted his own government’s guidelines and helped create a false sense of invulnerability in the White House, an approach that has now failed him as it did a nation where more than 200,000 people have died.

Marine One, the presidential helicopter, lifted off Friday to take Trump to a military hospital from the same White House lawn that less than a week earlier had been the site of his celebratory nomination of a new Supreme Court justice as he charged toward the November election.

“He let the country down by disregarding the CDC, ignoring federal guidelines and acting like he was Superman,” said presidential historian Douglas Brinkley. “He did not just downplay the virus, he paraded around like a peacock, making fun of those who took it seriously.”

From the pandemic’s early days, Trump, by his own admission, played down the severity of the virus. He repeatedly suggested it would “disappear” and for a while was pushing for the American economy to fully reopen by Easter, just a month after the pandemic fully engulfed the nation.

And he soon began resisting the advice of public health experts on his own coronavirus task force, including Dr. Anthony Fauci and Dr. Deborah Birx. He publicly clashed with the heads of the Food and Drug Administration and the Centers for Disease Control and Prevention over everything from the risks associated with opening schools to the timetable for a potential COVID-19 vaccine.

Those on the White House staff dared not break with the president, who wanted to embody a nation on the way back, not one fixated with health guidelines that would remind a nervous public about the virus rather than an economic resurgence.

Experts urged the widespread use of masks, including CDC Director Robert Redfield, who testified before Congress last month that face coverings could be a more effective safeguard than a vaccine. Trump has eschewed their use, telling aides that he didn’t like how he looked in them and that it sent a message to the public that he was worried about his health.

He has worn masks only sporadically and politicized their use, saying he didn’t need them because he was tested and most people he saw were kept six feet away. He mocked Democrat Joe Biden for consistently wearing a face covering, while many of the president’s supporters followed his example and skipped them, even at crowded events.

And their use, while technically required, wasn’t enforced in the White House either. Most senior aides rarely wore masks, even in tight quarters in the West Wing or on Air Force One. A belief took hold that because those who came in contact with president received a rapid COVID-19 test every day, they were safe in their bubble.

But the rapid tests were far from foolproof and were sometimes foiled by the virus’ lengthy incubation period. Staff members, including the national security adviser and the president’s personal valet, contracted the virus while one of the president’s closest aides, Hope Hicks, tested positive just hours before Trump and first lady Melania Trump did.

“He mocked the medical experts and their advice. He mocked it all right up until the presidential debate when he stood on that stage,” said Michael Steele, former head of the Republican Party. “He had the best information possible and didn’t take it.”

The White House, for its part, has brushed off criticism of spotty mask-wearing by Trump and his staff by citing the frequent testing regimen. Trump styles his large campaign gatherings as “peaceful protests” exempt from limits on crowd size. And as for Trump's undercutting of public health officials, officials are quick to point to contrary medical opinions.

Journalist Bob Woodward recorded Trump early in the year admitting to downplaying the threat of the virus. The president always pushed forward, insisting the nation was nearly over the pandemic even as cases surged throughout the country.

Even in the hours after the president’s diagnosis, senior White House staff, including chief of staff Mark Meadows and economic adviser Larry Kudlow, walked around the White House complex without wearing masks. The White House, even now, says the face coverings are a matter of “personal choice” for most staffers.

In a belated shift, National Security Council staffers were required to start wearing them as of Friday. Secret Service agents are mandated to wear them when social distancing is not possible.

And it wasn’t just about masks.

As the summer wound down, and Trump lagged behind Biden in polls for an election seen as a referendum on White House handling of the pandemic, the president’s campaign aimed to project normalcy in an effort to convince voters that the president had the virus under control.

After a botched attempt to restart Trump’s trademark rallies in Tulsa in June, the campaign began slowly organizing smaller gatherings of supporters, usually outdoors at airports. Though the CDC recommended against large crowds and unnecessary travel, the president began crisscrossing the country, even while Biden largely remained at home, conducting virtual evets.

The rallies got bigger and bigger as the months marched on, with little social distancing and masks recommended but not required. And crowds became part of the messaging for two of the president’s recent signature events: Hundreds of people packed the White House South Lawn for his acceptance speech during the Republican National Convention, and the Rose Garden was packed for the nomination of his Supreme Court pick, Judge Amy Coney Barrett, a week ago.

Six days later, Trump was again on that lawn. This time, he walked slowly to the waiting helicopter, bound for Walter Reed for a multi-day hospital stay. There were no cheering crowds. And everyone on the lawn, reporter and staffer alike, wore a mask. Trump did, too.