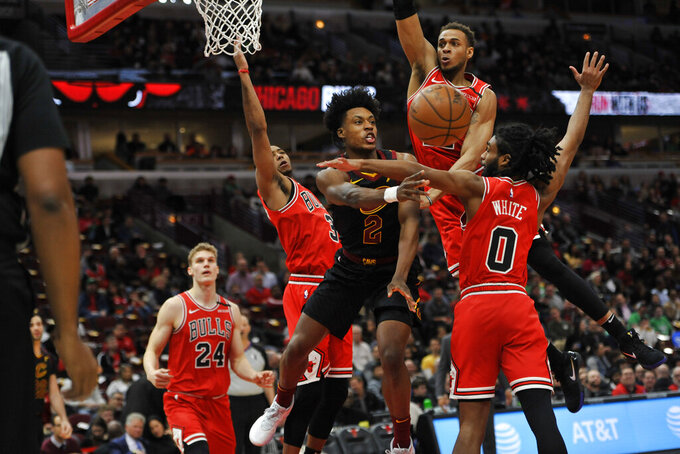 File-This March 10, 2020, file photo shows Cleveland Cavaliers' Collin Sexton (2) passing the ball as Chicago Bulls' Coby White (0), Daniel Gafford (12), Shaquille Harrison (3) and Lauri Markkanen (24) defend during the first half of an NBA basketball game in Chicago. The NBA's interrupted season and invitation-only gathering in Florida to finish it due to the pandemic hurt every team to varying degrees. It devastated the Cleveland Cavaliers. (AP Photo/Paul Beaty, File)

CLEVELAND (AP) — The NBA's interrupted season and invitation-only gathering in Florida to finish it due to the pandemic hurt every team to varying degrees.

It devastated the Cleveland Cavaliers.

Not only did they not get to build off some early success in 11 games under coach J.B. Bickerstaff, who took over in February when John Beilein resigned midway through his first season, but the Cavs were one of eight teams excluded from the Orlando bubble, an omission that deprived them of getting valuable experience for their young players.

COVID-19 hit just as the Cavs were finding their stride.

“It definitely slowed down our progression. We felt we had a good thing going,” said forward Kevin Love, who along with Matthew Dellavedova is the only player left from Cleveland's 2016 championship team. “Playing competitive games would have really built our chemistry in a big way.”

The Cavs, who went 5-6 under Bickerstaff before the season got pulled out from under them, are trying to make up for lost time. But finally reunited after months away from the court, they're excited about what's ahead.

They have plenty of size, proven scorers, enough experienced veterans and some interesting young players, including guards Collin Sexton, Darius Garland and rookie forward Isaac Okoro, the No. 5 overall pick in this year's draft who has had an impressive training camp.

It's up to Bickerstaff, in his first full season with Cleveland and second stint as a head coach, to piece together the Cavs puzzle.

He's promised to have a competitive team and one that hangs its hat on defense, which is something the Cavs barely played last season when they ranked last defensively in the league for the second year in a row.

“We have talented guys here,” Bickerstaff said. “We have All-Star players. We have lottery picks. We have NBA rotational players. There’s an ingredient that you look for to find a way to overachieve.”

The Cavs went 19-46 and finished with the worst record in the Eastern Conference last season. But they showed promise after Bickerstaff took over and he's convinced they can make more progress .

“I know expectations are low, but I’m confident our guys will outreach those expectations and we’ll put a lot of pressure on people,” he said. “I can’t give you a number (of wins), but what I can tell you is that at the end of every single night, our fan base and our organization will be proud of the way that our guys represent themselves on the court, and that’s our first building step.”

Tristan Thompson's departure as a free agent — he signed with Boston — after nine seasons strips the Cavs of a valuable rebounder and leader.

“That's a void left to be filled and that’s something that I certainly plan on stepping into,” said forward Larry Nance Jr. “Obviously, that’s gonna require some help from guys like Kev (Love) and guys like ’Dre (Andre Drummond). But that’s definitely a role that I’ve been learning more about, working more towards, and I feel that I’m ready for it."

Nance will also fill multiple roles on the floor as Bickerstaff is giving him the freedom to step outside and shoot. He can play either forward spot and even center.

The Cavs are making the big man fashionable again.

With Love, Nance, Drummond and Javale McGee, Bickerstaff has some height to work with and intriguing lineup combinations.

“It’s a weapon,” he said. "It’s a mismatch opportunity. They’re big and skilled. That’s the difference. When you put a bunch of big guys out on the floor in today’s NBA, if they lack skill, people will take advantage of them and you’ll struggle on the offensive end of the floor.

“Our big guys are skilled. Kevin, Larry and Dre are really good passers. They have the ability to space the floor and play around one another.”

On defense, Drummond and McGee are both proficient shot blockers who will protect the rim.

Love is entering his 13th NBA season, and seventh with the Cavs. When he arrived from Minnesota in 2014, there will already trade rumors shipping him out of Cleveland.

"I’m the last of the Mohicans, last of the Cavaliers," he cracked. “It is something to be said for that. It’s crazy after all that’s been said.”

Bickerstaff knows he may have to manage Love's minutes to keep him fresh, but he's counting on the 32-year-old, who has averaged 18.2 points and 11.1 rebounds in his career, to show Cleveland's kids the way.

“We need him to have a big year,” Bickerstaff said. “He is still better than 75 to 80% of the guys in this league. He’s a five- or six-time All-Star, he’s a champion. He’s probably a first ballot Hall of Famer. We need Kevin to be Kevin because he makes everybody else better around them. He makes everybody else’s job easier if he’s himself.”