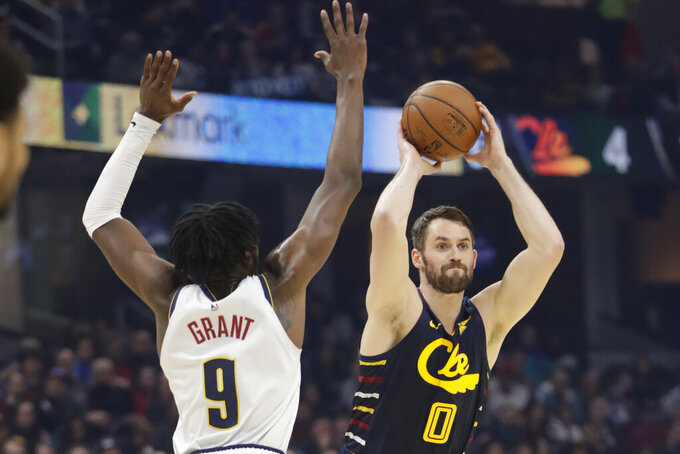 File-This March 7, 2020, file photo shows Cleveland Cavaliers' Kevin Love (0) passing against Denver Nuggets' Jerami Grant (9) in the first half of an NBA basketball game, in Cleveland. The NBA's interrupted season and invitation-only gathering in Florida to finish it due to the pandemic hurt every team to varying degrees. It devastated the Cleveland Cavaliers.(AP Photo/Tony Dejak, File)

CLEVELAND (AP) — Cavaliers forward Kevin Love will miss the season opener on Wednesday night against Charlotte because of a strained right calf.

The team officially ruled Love out on Tuesday, hours after Cavs coach J.B. Bickerstaff said he was preparing not to have the five-time All-Star in the lineup.

Love got hurt during the first preseason game against Indiana earlier this month. He missed Cleveland's next three games and hasn't been cleared to practice.

Larry Nance Jr. will likely start in place of Love, who has said he felt physically refreshed as he enters his 13th season.

“It’s best to just move Larry in that spot and increase his minutes and his workload,” Bickerstaff said last week. “Obviously, if Kevin is out, we will have to play some small ball. But I think to start games and the majority of the minutes, I think it’s a good thing to just move Larry because he’s got a similar skill set, his ability to pass the ball and all those things.”

The Cavs, who went 5-6 under Bickerstaff before their 2019-2020 was interrupted and finally ended by the COVID-19 pandemic, will also be without second-year swingman Kevin Porter Jr.

He hasn't joined the team since having some off-the-court issues. Porter Jr. had a weapons charge that was dropped recently.