Cavs coach Bickerstaff to miss game due to personal reasons 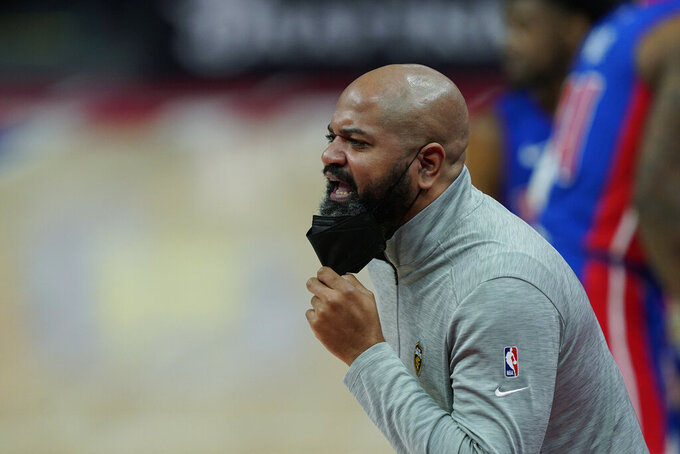 Cleveland Cavaliers head coach J.B. Bickerstaff directs from the sideline during the first half of an NBA basketball game against the Detroit Pistons, Monday, April 19, 2021, in Detroit. (AP Photo/Carlos Osorio)

The team said in a statement that Bickerstaff, who is in his first full season with Cleveland, will be replaced on the sideline by assistant coach Greg Buckner.

The Cavaliers expect Bickerstaff to return for Friday night's game at Charlotte.

The 42-year-old Bickerstaff took over last season when John Beilein stepped down at the All-Star break. Cleveland went 5-6 under Bickerstaff before the season was stopped by the COVID-19 pandemic.

The Cavaliers, who have been ravaged by injuries all season, are trying to earn a spot in this season's NBA play-in tournament, which will include the Nos. 7-10 teams in each conference. Cleveland (20-37) currently is four games behind Chicago for the No. 10 spot.

Bickerstaff was disappointed with his team following a loss on Monday in Detroit. The Cavs fell behind by 23 points in the first half to a Pistons team missing seven players.

Afterward, Bickerstaff said, “We've got to grow up.”