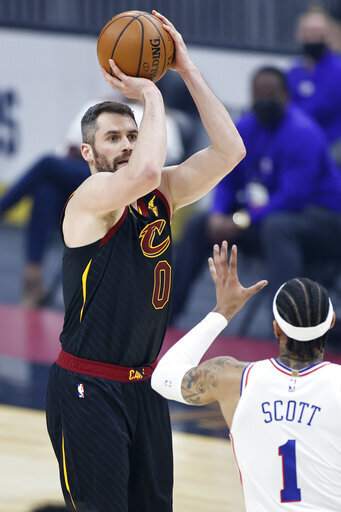 CLEVELAND (AP) — Cavaliers star center Kevin Love returned to the starting lineup and played in just his fifth game this season after being sidelined by a severe calf strain.

Coach J.B. Bickerstaff said Love — and guard Matthew Dellavedova, who hasn't played in more than a year — are available Thursday night as the short-handed Cavs face the Philadelphia 76ers. It's Love's first action since March 14, when he came back after missing 32 games.

Dellavedova is making his season debut after being out with a concussion and appendectomy.

Bickertstaff said Love and Dellavedova, the only players left from the Cavs' 2016 NBA title team, will be on a minutes restriction as they ease their way back into game shape.

Love received a nice ovation when he was introduced before the game, and he promptly made his first three shots, two of them 3-pointers, to give the Cavs an early lead. Love finished with 13 points, three rebounds and two assists in the first quarter.

Dellavedova had two assists after checking in with four minutes left in the first.

Love played 45 total minutes in Cleveland's first two games before missing more than two months with the injury, which he initially sustained during the exhibition opener and was only supposed to keep him out for a month.

The injury lingered, and the five-time All-Star struggled to gain enough confidence to play at less than 100%.

The 32-year-old Love returned for his first game since Dec. 27 on March 12 and played 10 minutes against New Orleans. Two nights later, his calf didn't feel right against Atlanta and the Cavs decided to shut Love down and give the injury more time to heal.

Dellavedova hasn't played since March 10, 2020, the final game before the Cavs' season was halted by the COVID-19 pandemic. He sustained a head injury during the preseason and was close to coming back when he felt ill and had his appendix removed in February.

"He’s extremely grateful to be able to play the game,” Bickerstaff said. “Our conversation, he just talked about how appreciative he was, how we’ve dealt with this and been patient in giving him this opportunity. He loves the game of basketball, he throws his heart into it completely.

"So you can imagine how frustrating and how difficult this process has been for a guy like that. But he’s extremely appreciative and grateful and he’s definitely excited about getting back on the court and joining his teammates.”

The Cavs need both Love and Dellavedova back with forwards Larry Nance Jr. (illness), Dylan Windler (knee soreness) and center Jarrett Allen (concussion) all out.