Cavs' Love, Sexton not happy being part of NBA's 'Delete 8' 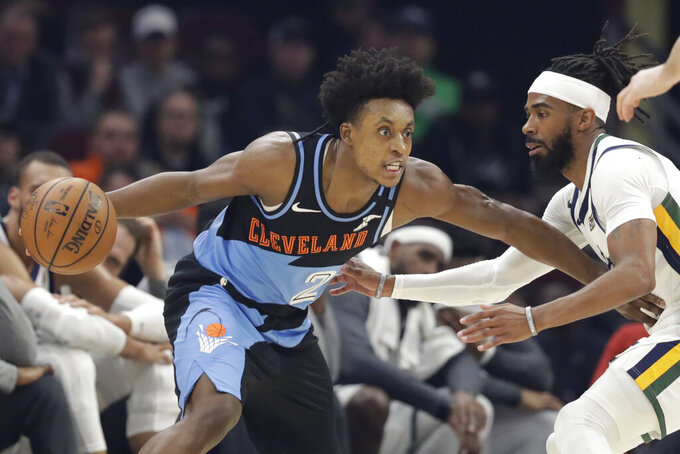 FILE - In this March 2, 2020, file photo, Cleveland Cavaliers' Collin Sexton, left, drives past Utah Jazz's Mike Conley in the first half of an NBA basketball game in Cleveland. When Sexton learned that the NBA _ and not a virus _ had ended his second season, the Cavaliers guard had a guttural reaction. “I was sick,” he said. The league's decision to only invite 22 teams to resume play at Disney World in Florida next month was a body blow for players on the omitted squads _ aka the Delete 8. And although they've had time to process the exclusion, Sexton, Cavs star forward Kevin Love and their teammates, are still struggling with the reality that their season is over. (AP Photo/Tony Dejak, File)

CLEVELAND (AP) — When Collin Sexton learned that the NBA — and not a pandemic — had prematurely ended his second season, the Cavaliers guard had a guttural reaction.

The league's decision to invite only 22 teams to resume play at Disney World in Florida next month and a season interrupted by COVID-19 was a body blow for players on the omitted squads — the Delete 8.

And although they've had time to process the exclusion, Sexton, Cavs star forward Kevin Love and their teammates are still struggling with the reality that their season is over while hoping they get to do something together this summer.

“It’s a tough pill to swallow,” Love said Friday on a Zoom call from New York. “But from a league’s perspective, being safe and navigating this time, I totally understand that.”

Perhaps no team feels the sting of being denied a chance to complete the season more than the Cavs, who went through a midseason coaching change — John Beilein stepped down at the All-Star break — and were playing their best ball when the outbreak brought everything to a halt.

With 17 games remaining, the Cavs were hoping to build off the momentum they had found in 11 games under new coach J.B. Bickerstaff. But instead of getting to pick up where they left off, the Cavs are stuck in a delay game they're powerless to control.

“I feel like at the end of the season we were looking to ruin teams' hopes in the playoffs and get a few wins here and there and just play it out,” said Sexton, who averaged a team-high 20.8 points and improved across the board in his second year. “We weren’t going to make the playoffs, but I felt like us playing those games was definitely going to help us.”

Asked to wrap up this strange season, Love couldn't.

“As far as summarizing this season, I don’t really know how to do that because we never really had clarity or we never got to like put our stamp or finalize how those last games were going to look for us,” he said. “I was really excited to see how that was all going to play out.”

The Cavs and the other seven teams not invited inside the Disney “bubble” to conclude the season have been in talks with the league about doing something for them. There have been discussions about extended mini-camps, scrimmages and even an eight-team tournament.

Several coaches, including Bickerstaff, have said it's unfair for their teams to sit out and be doubly penalized by not being able to bond or play meaningful games. With the start of next season expected to be delayed until December, it's possible the Cavs, Warriors, Pistons and others could go nearly a year between playing games that count.

The Cavs have been holding individual workouts at their facility since early May and the league is relaxing some guidelines for coaches. Two coaches or development personnel can now be on the court with a player and head coaches can supervise those sessions starting June 23.

Until then, Bickerstaff is hoping the league takes care of the teams in limbo.

“How do we get guys together in our market? How do we get some competitive games out of it?" he said. "There is nothing definitive yet, but we are fighting and there are other teams I know for sure that are fighting, too, to get something done because development is key.”

Although he won't be playing in Florida, Love will be watching.

The five-time All-Star is intrigued by how games will look — and feel — without fans. Once the postseason begins after an eight-game tuneup, the stakes will be higher but will players be able to manufacture the same intensity while not in an electrically charged environment?

“There’s so many things that remain unanswered and we won’t know until that time comes,” Love said, steering clear of predicting a champion. “You just don’t know how guys are going to come in, whether they’ll be in shape, whether they’ll have that rhythm, whether they’ll be able to get it back in those eight games. I think that makes it in its own ways more appealing.”