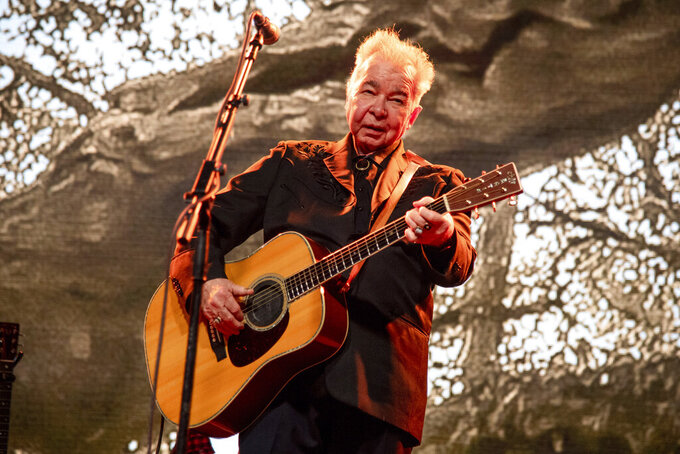 FILE - This June 15, 2019 file photo shows John Prine performing at the Bonnaroo Music and Arts Festival in Manchester, Tenn. Prine died Tuesday, April 7, 2020, from complications of the coronavirus. He was 73. (Photo by Amy Harris/Invision/AP, File)

John Prine, the ingenious singer-songwriter who explored the heartbreaks, indignities and absurdities of everyday life in “Angel from Montgomery,” “Sam Stone,” “Hello in There” and scores of other indelible tunes, died Tuesday at the age of 73.

His family announced his death from complications from the coronavirus; he died at Vanderbilt University Medical Center in Nashville, Tennessee.

His wife Fiona said last month that she had tested positive for COVID-19 and she has since recovered, but her husband was hospitalized on March 26 with coronavirus symptoms. He was put on a ventilator and remained in the intensive care unit for several days.

Winner of a lifetime achievement Grammy earlier this year, Prine was a virtuoso of the soul, if not the body. He sang his conversational lyrics in a voice so rough that even he didn't like the sound all that much, until it was softened by the throat cancer surgery that disfigured his jaw late in life.

He joked that he fumbled so often on the guitar, taught to him as a teenager by his older brother, that people thought he was inventing a new style. But his open-heartedness, eye for detail and sharp and surreal humor brought him the highest admiration from critics, from such peers as Bob Dylan and Kris Kristofferson, and from such younger stars as Jason Isbell and Kacey Musgraves, who even named a song after him.

In 2017, Rolling Stone proclaimed him “The Mark Twain of American songwriting.”

Prine began playing as a young Army veteran who invented songs to fight boredom while delivering the U.S. mail in Maywood, Illinois. He and his friend, folk singer Steve Goodman, were still polishing their skills at the Old Town School of Folk Music when Kristofferson, a rising star at the time, heard them sing one night in Chicago, and invited them to share his stage in New York City. The late film critic Roger Ebert, then with the Chicago Sun-Times, also saw one of his shows and declared him an “extraordinary new composer.”

Suddenly noticed by America’s most popular folk, rock and country singers, Prine signed with Atlantic Records and released his first album in 1971.

“I was really into writing about characters, givin’ ‘em names,” Prine said, reminiscing about his long career in a January 2016 public television interview that was posted on his website.

“You just sit and look around you. You don’t have to make up stuff. If you just try to take down the bare description of what’s going on, and not try to over-describe something, then it leaves space for the reader or the listener to fill in their experience with it, and they become part of it.”

He was among the many promoted as a “New Dylan” and among the few to survive it and find his own way. Few songwriters could equal his wordplay, his empathy or his imagination.

“I try to look through someone else’s eyes,” he told Ebert in 1970. His characters were common people and confirmed eccentrics, facing the frustrations and pleasures anyone could relate to. “Sam Stone” traces the decline of a drug-addicted Vietnam veteran through the eyes of his little girl. “Donald and Lydia” tells of a tryst between a shy Army private and small-town girl, both vainly searching for “love hidden deep in your heart:”

But when they were finished, there was nothing to say,

‘cause mostly they made love from ten miles away.

“He writes beautiful songs,” Dylan once told MTV producer Bill Flanagan. “I remember when Kris Kristofferson first brought him on the scene. All that stuff about Sam Stone the soldier-junkie-daddy, and Donald and Lydia, where people make love from ten miles away -- nobody but Prine could write like that.”

Prine’s mischief shined in songs like “Illegal Smile,” which he swore wasn’t about marijuana; “Spanish Pipedream,” about a topless waitress with “something up her sleeve;” and “Dear Abby,” in which Prine imagines the advice columnist getting fed up with whiners and hypochondriacs.

“You have no complaint,” his Abby writes back:

stop wishin’ for bad luck and knocking on wood!”

Prine was never a major commercial success, but performed for more than four decades, often selling his records at club appearances where he mentored rising country and bluegrass musicians.

“I felt like I was going door to door meeting the people and cleaning their carpets and selling them a record,” he joked in a 1995 Associated Press interview.

Many others adopted his songs. Bonnie Raitt made a signature tune out of “Angel from Montgomery,” about the stifled dreams of a lonely housewife, and performed it at the 2020 Grammys ceremony. Bette Midler recorded “Hello in There,” Prine’s poignant take on old age. Prine wrote “Unwed Fathers” for Tammy Wynette, and “Love Is on a Roll” for Don Williams.

Prine himself regarded Dylan and Cash as key influences, bridges between folk and country whose duet on Dylan’s country rock album “Nashville Skyline” made Prine feel there was a place for him in contemporary music. Though mostly raised in Maywood, he spent summers in Paradise, Kentucky, and felt so great an affinity to his family’s roots there he would call himself “pure Kentuckian.”

Prine was married three times, and appreciated a relationship that lasted. In 1999, he and Iris DeMent shared vocals on the classic title track of his album “In Spite of Ourselves,” a ribald tribute to an old married couple.

Against all odds, honey we’re the big door-prize

We’re gonna spite our noses right off of our faces

Prine preferred songs about feelings to topical music, but he did respond at times to the day’s headlines. Prine’s parents had moved to suburban Chicago from Paradise, a coal town ravaged by strip mining that inspired one of his most cutting protest songs, “Paradise.” It appeared on his first album, along with “Your Flag Decal Won’t Get You Into Heaven Anymore,” which criticized what he saw as false patriotism surrounding the Vietnam War.

Many years later, as President George W. Bush sent soldiers to war, Prine had a song for that, too. In “Some Humans Ain’t Human,” he wrote: “You’re feeling your freedom, and the world’s off your back, some cowboy from Texas, starts his own war in Iraq.”

Prine’s off-hand charisma made him a natural for movies. He appeared in the John Mellencamp film “Falling From Grace,” and in Billy Bob Thornton’s “Daddy and Them.” His other Grammy Awards include Best Contemporary Folk Recording for his 1991 album “The Missing Years,” with guest vocalists including Raitt, Tom Petty, Bruce Springsteen and Phil Everly. He won Best Traditional Folk Album in 2004 for “Beautiful Dreamer.”

Prine didn’t let illness stop him from performing or recording. In 2013, long after surviving throat cancer, he was diagnosed with an unrelated and operable form of lung cancer, but he bounced back from that, too, often sharing the stage with DeMent and other younger artists. On the playful talking blues “When I Get to Heaven,” from the 2018 album “The Tree of Forgiveness,” he vowed to have the last laugh for all eternity.

When I get to heaven, I’m gonna shake God’s hand

Thank him for more blessings than one man can stand

Check into a swell hotel; ain’t the afterlife grand?

His survived by his wife, Fiona, two sons Jack and Tommy, his stepson Jody and three grandchildren.