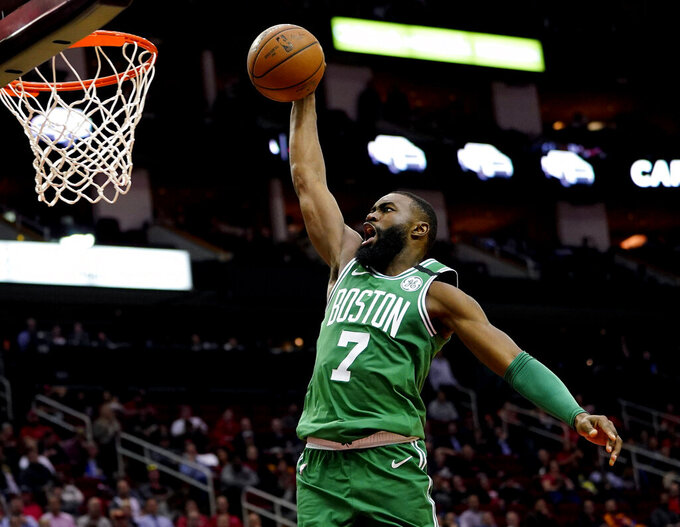 FILE - In this Feb. 11, 2020, file photo, Boston Celtics' Jaylen Brown goes up to dunk against the Houston Rockets during the second half of an NBA basketball game in Houston. Brown is encouraged by the steps the NBA is taking to connect with its players’ desire to support social justice causes. He also says he wants to see the league go further with some of those plans as it prepares to restart the season later in Florida. (AP Photo/David J. Phillip, File)

BOSTON (AP) — Jaylen Brown is encouraged by the steps the NBA is taking to connect with its players’ desire to support social justice causes.

He also wants to see the league go further with some of those plans as it prepares to restart the season later this month in Florida.

One of the Celtics’ young stars, the 23-year-old has been one of the most outspoken voices among players since the NBA paused its season in March.

From encouraging young Americans to take COVID-19 seriously, to driving 15 hours from Boston in May to lead a protest march in the days after the release of the video of George Floyd’s death in Minneapolis, Brown has actively used social media to raise awareness on several fronts to his more than 1.6 million followers on Twitter and Instagram.

While he said Monday that he initially considered not playing in Orlando because of the pandemic and family concerns, he ultimately decided the opportunity to amplify his voice on the NBA’s worldwide stage won out.

“Once I thought about the opportunity that the organization and the NBA presented to play for something bigger than myself, I was signed up,” he said. “I plan on using my voice while I’m down there. I plan on spreading light on things that are getting dimmed and hopefully the NBA and our organization can understand.”

Brown’s heavily involved with National Basketball Players Association as a member the executive committee and said he’s encouraged by the open dialogue among players and the NBA leadership’s attentiveness to the union’s concerns. That has included allowing an option for players to opt out of playing in Orlando.

Lakers guard Avery Bradley and Brooklyn’s Kyrie Irving, who have been vocal leaders of a players’ coalition that has sought to keep a focus on social justice and racial equality issues, are among a handful of players who are sitting out the Orlando restart. Bradley made his decision out of concerns for his son with a history of respiratory illnesses and Irving because of injury.

Last month the league announced a pledge to devote resources to helping players promote social justice causes. Those initiatives will include painting “Black Lives Matter” on the courts at Disney Wide World of Sports. And while players who decided to opt out of playing in Orlando won’t be paid for the games they missed, they won’t face discipline from their teams.

“At the end of the day, Black Lives Matter and Black athletes’ lives matter as well,” Brown said. “I respect any guy’s decision. My decision was to play just because I felt like it’s bigger than me and it’s bigger than my family and it’s bigger than all of us. People have died for the opportunity to be able to shed light and speak on certain causes. The least I could do is play basketball.”

But Brown also is in agreement with Philadelphia 76ers forward Mike Scott that the NBA’s plan to only allow players to chose messages from a league-approved list to put on the back of their jerseys is disappointing.

“I think that list is an example of a form of limitations,” Brown said. “I think we should be able to express our struggle just a little bit more.”

He’s hopeful there’s still time for that to happen.

“The bottom line is there are improvements that need to be made,” Brown said. “The NBA has a great voice, a lot of resources and a lot of influence. We're appreciative that they’re helping and aiding in a lot of those things that we care about. That’s really important.”