Celtics eager to find out what they can be entering restart 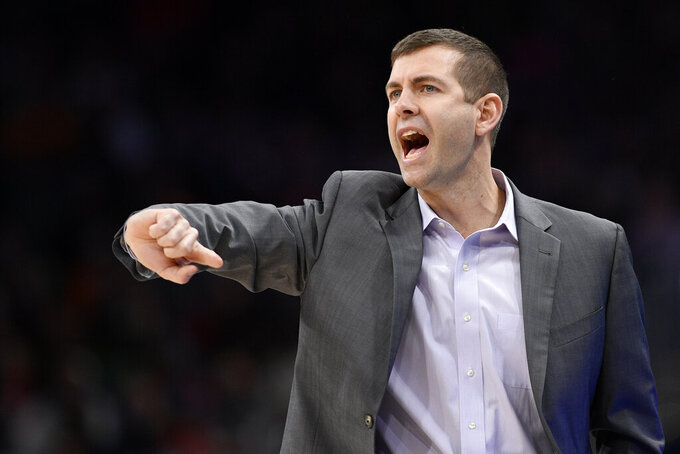 FILE - In this Jan. 6, 2020 file photo, Boston Celtics head coach Brad Stevens gestures during the second half of an NBA basketball game against the Washington Wizards in Washington. Before the pandemic forced the NBA to pause its season, the Celtics were a team eager to figure out what they could be. That question still lingers as Boston prepares to restart the now-truncated season inside the Orlando bubble. (AP Photo/Nick Wass, File)

BOSTON (AP) — Before the COVID-19 pandemic forced the NBA to pause its season in March, the Celtics were a team still trying to figure out what it could be.

Boston was one of the top teams in the Eastern Conference. It also had one of the league’s hottest players in 22-year-old Jayson Tatum, who was putting up career numbers on the heels of his first All-Star game appearance.

But because of injuries, the Celtics also had yet to truly gauge what their core of Tatum, offseason acquisition Kemba Walker, veterans Gordon Hayward and Marcus Smart and an improved Jaylen Brown could do together.

That question still lingers as Boston prepares to restart the now-truncated season inside the Florida bubble.

Celtics coach Brad Stevens described the reset as an ultimate venture into the unknown, in which several variables will have a role in determining how far his team can go in the playoffs.

“Everybody will be challenged. It’s just a unique deal,” Stevens said of his expectations for the initial eight seeding games and playoffs.

Complicating matters the most for the Celtics is that after four months to rest a left knee that had given him issues after the All-Star break, Walker arrived in Florida at less than 100%. He experienced discomfort in his knee during an individual workout earlier this month in Boston and the team has been taking a cautious approach with him ever since.

Walker didn’t participate in a full practice session during the team's first week in the Orlando area and he will play on a minutes’ restriction in the Celtics’ eight seeding games.

The All-Star point guard said he agrees it is the best choice for him to take it light initially, but also acknowledged he’s in an unfamiliar situation.

“It’s definitely pretty frustrating. Just because I’m not a guy who misses many games, especially throughout the course of my career,” Walker said. “But I’m not really concerned much, honestly, because I think I’m trending upwards. I’m getting better and I’m getting close to a return. So I’m fine. And I’ll be back better than ever I think.”

Aside from Walker’s knee and a recent concussion suffered by reserve point guard Tremont Waters during practices, the Celtics are as healthy as they’ve been since they opened the season by winning 10 of their first 11 games. Brown is recovered from the right hamstring strain that sidelined him for three games prior to the stoppage. Big man Robert Williams, who missed 37 games with a hip injury before returning to action in March, said he was able to use the time off to get his conditioning back.

Despite losing four out of six prior to the suspension of the season, the Celtics find themselves just three games behind the Raptors for the second seed, but just two and a half in front of Miami for the third seed. Boston will play both teams during the conclusion of the regular season. It would be nice to get the second seed and dodge what is currently a first-round playoff matchup with the Sixers (Boston's 1-3 against them this season). But avoiding a meeting with likely top seed Milwaukee until the conference finals is also a priority.

Before the hiatus, Tatum was averaging career highs in points (23.6 per game), rebounds (7.1) and assists. (2.9), while shooting 45% from the field and 40% from the 3-point line. He also leads the team with 13 30-point games and is tied with Walker with two 40-point games this season. Tatum said he feels like he’ll be able to recapture that form. “I think I know what I’m capable of, what I’m striving for,” he said. “So I think that’s the edge that I have for myself. Just that I step on the floor and I think that I’m the best player every night. I know every guy probably feels that way. But I think that’s the mindset that I take.”

Because of Walker’s status, Stevens will probably use the seeding games to experiment with possible playoff rotations. But that also means he probably won’t be able to get a good look at his projected starting lineup of Walker, Brown, Daniel Theis, Tatum and Hayward until the postseason. That group has started just 16 games together this season, going 10-6.