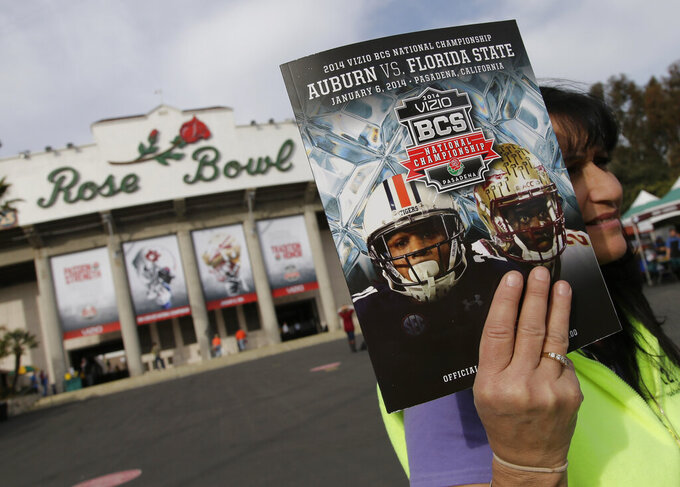 FILE - In this Jan. 6, 2014, file photo, a vendor sells a program outside the Rose Bowl before the BCS National Championship NCAA college football game between Auburn and Florida State in Pasadena, Calif. The Rose Bowl was denied a special exemption from the state of California to allow a few hundred fans to attend the College Football Playoff semifinal on Jan. 1, putting the game staying in Pasadena in serious doubt. A person involved with organizing the game told The Associated Press the Tournament of Roses' request was denied earlier this week. (AP Photo/Chris Carlson, File)

The College Football Playoff semifinal scheduled to be played at the Rose Bowl in Pasadena on Jan. 1 is relocating to the Dallas Cowboys' stadium in Texas, a move prompted by California's ban on spectators at sporting events during the pandemic.

College Football Playoff executive director Bill Hancock said Saturday night that conference commissioners who make up the CFP management committee and the Tournament of Roses mutually agreed to relocate the game because of the “growing number of COVID-19 cases in Southern California.”

“The game in Dallas will still be played in the mid-afternoon window on New Year’s Day,” Hancock said in a statement. “We are pleased that parents and loved ones will now be able to see their students play in the game."

The decision, announced about 13 1/2 hours before the playoff field was scheduled to be set Sunday, is just the latest twist during a college football season played through myriad COBID-19 disruptions.

The Rose Bowl, know as the Granddaddy of all college football's postseason games, has been played every year since 1916.

Coaches and school officials with playoff contenders have complained about the Rose Bowl being unable to accommodate players’ family members because of California’s COVID-19 restrictions, put in a place as the state tries to fight a public health crisis that is straining its hospitals.

Notre Dame coach Brian Kelly even suggested that if the Fighting Irish were selected to play in the Rose Bowl, the school would boycott if players could not have family attend.

None of the teams in contention to be selected for the playoff are from the western United States.

The Rose Bowl asked the state for an exception to the restriction, but was denied twice, including earlier this week. The restrictions have been in place since March and UCLA has played its home football games at the Rose Bowl since November, including its regular-season finale Saturday night.

"We know that the decision was not an easy one to make,” said David Eads, Tournament of Roses CEO and Executive Director. “While we remain confident that a game could have been played at the Rose Bowl Stadium, as evident in the other collegiate and professional games taking place in the region, the projection of COVID-19 cases in the region has continued on an upward trend.”

The other College Football Playoff semifinal on Jan. 1 will be held in New Orleans at the Sugar Bowl, with current plans to allow 3,000 fans at the Superdome. The championship game is scheduled for Jan. 11 at Hard Rock Stadium in Miami Gardens, Florida.

Hancock said it had not yet been determined if the semifinal at AT&T Stadium in Arlington would still be called the Rose Bowl. The name is part of licensing agreement and is co-owned by the Pasadena Tournament of Roses and the City of Pasadena.

If not, it would be the first time in more than 100 years no Rose Bowl game was played after a college football season. The first Rose Bowl was played Jan. 1, 1902.

The last time the Rose Bowl game was played outside Pasadena, California, was 1942. The game between Oregon State and Duke was played in Durham, North Carolina, because the West Coast was deemed unsafe after the attacks on Pearl Harbor on Dec. 7, 1941.