Chairmen of the boards: Japanese team powerful in halfpipe 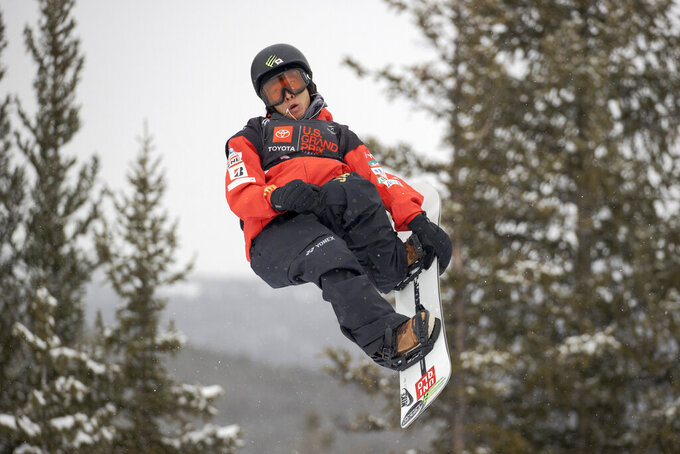 FILE - Ayumu Hirano, of Japan, makes a qualifying run on the halfpipe Thursday, Dec. 9, 2021, during a U.S. Grand Prix snowboarding event at Copper Mountain, Colo. Long filled with potential, but only Ayumu Hirano's two silver medals to show for it over the past decade, a crew of Japanese riders appears poised to take over the halfpipe in Beijing with four bona fide gold-medal contender. (AP Photo/Hugh Carey, File)

ASPEN, Colo. (AP) — With Winter X Games medals in one hand and their snowboards in the other, the Hirano brothers — Ayumu and Kaishu — posed for picture after picture at the bottom of the halfpipe.

Get used to it. They could be on the podium again at the Beijing Games, and it would be no surprise to see the entire Japanese team go gold, silver, bronze, and maybe even scoop up fourth place, too.

“The Japanese are a force,” said Australia's Scotty James, who took gold at Winter X over the weekend and, along with Shaun White, is among the handful of male riders standing in the way of Japan's growing dominance. “Just incredibly talented snowboarders.”

Tight-knight, too. They may be fierce rivals on competition days, but they stay good friends in between. They travel together, eat together and perfect innovative tricks together. They’ve certainly raised the bar in the halfpipe — see: recent triple corks by Ayumu Hirano and Ruka Hirano (not related) — along with expectations.

Long filled with potential, they just have Ayumu Hirano's two silver medals and Taku Hiraoka's bronze to show for it since snowboarding arrived on the Olympic scene in 1998. But this crew of Japanese riders appears poised to take over the halfpipe in Beijing with four bona fide gold-medal contenders in the Hirano brothers — Kaishu is nearly four years younger than Ayumu— along with Ruka Hirano and Yuto Totsuka, who is ranked first in the world after dominating the halfpipe for the past two years.

The country's next-best could be in contention, as well — if there wasn't a quota limit. It's akin to the days when the U.S. contingent ruled the pipe.

Consider this: Seven of the world's top 20 riders hail from Japan. The squad dominates contests and leaves others wondering how do they catch up?

“That,” Swiss snowboarder Jan Scherrer said, “is the question we all ask ourselves.”

There are many theories:

— The riders have a similar style, with a dose of their own flair thrown in, of course. “They just ooze this natural ability when they ride,” James said. “They’re pushing each other to the highest level.”

— Attention to detail. “They work so hard and they push each other; so that environment really helps to improve them,” Japanese halfpipe team coach Daisuke Murakami said.

— Fearless. “It always looks like they’re less scared of doing stuff than me, for example,” Scherrer said with a laugh.

— And maybe above all this: They share tips and constantly support each other.

Take last month at the Dew Tour, when snowboarder Raibu Katayama showed up despite a broken rib and a concussion from a hard crash a week before. Not to compete, but to encourage. He stood in the front row of a packed crowd and cheered on his teammates in the halfpipe.

“We’re brothers. We’re a family,” Ruka Hirano said. “But once we get out there for a competition, it’s like a rivalry.”

Setting the tone and pushing the boundary is Ayumu Hirano, who is among those attempting to master one of the halfpipe's most difficult tricks in the triple cork, which features three head-over-heels rotations.

The trick could be a game-changer in Beijing and something most riders are scrambling to incorporate. James is working on a version. So are Ayumu Hirano's teammates. What comes after the triple in a run could be the key to winning the Olympics. Though he's landed it twice in competition this winter, he has struggled with his next trick.

“It’s really hard,” the 23-year-old Ayumu Hirano said through an interpreter. "I want to get (the triple cork) right. That’s my strategy.”

He's so business-like, too.

“If you look at Ayumu on a podium, he’s not even smiling,” said Louie Vito, who represented Team USA at the 2010 Vancouver Olympics and recently earned a spot to Beijing on the Italian team. “They’re not cocky. They don’t showboat. They put on a show for everybody — and that’s what they expect.”

The Hirano brothers certainly did at Winter X as Ayumu entertained the crowd with a triple cork. His little brother stood out, too, in his camouflage outfit.

“It’s not something that happens often, getting on the podium together,” said Ayumu Hirano, who competed at the Tokyo Games last summer in the Olympic debut of skateboarding. "I felt this is what I’d been waiting for.”

The women’s side is solid, too, with Sena Tomita taking gold at Winter X. The field that night was missing defending Olympic champion Chloe Kim, who's preparing for Beijing. The Japanese women could be in the medal mix with Kim, U.S. teammate Maddie Mastro, Spain's Queralt Castellet and Chinese riders such as Xuetong Cai.

“They are so consistent and clean that if they stick to the game plan, they definitely will threaten the podium,” snowboard commentator Jonathan “DC” Oetken said of the Japanese women's squad.

Here's something more: There's another wave in waiting.

“You look at their junior team and you’re like, ‘Holy Cow,’” Vito said. ”They are so deep even outside of the national team to their junior team that when one retires, there’s plenty of kids waiting to step up for their chance to prove themselves. The Japanese come in ready to throw down.”