Chargers' Lynn heads into camp happy with Bosa on board 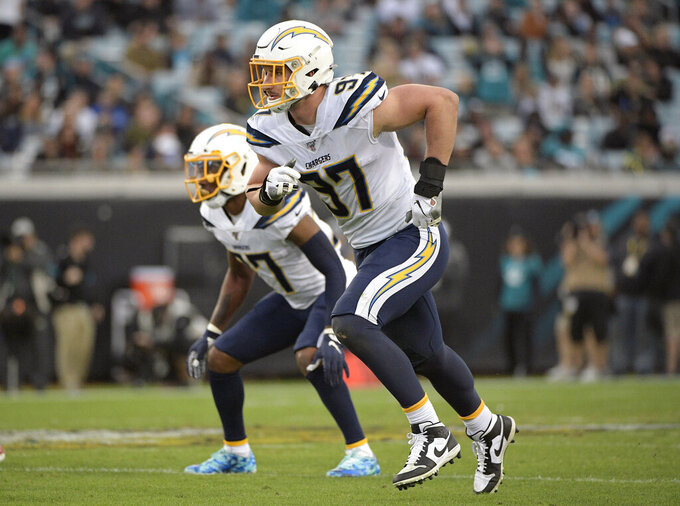 FILE - In this Sunday, Dec. 8, 2019 file photo, Los Angeles Chargers defensive end Joey Bosa (97) follows a play during the first half of an NFL football game against the Jacksonville Jaguars in Jacksonville, Fla. Defensive end Joey Bosa has agreed to a six-year, $135 million contract extension with the Los Angeles Chargers, according to multiple people familiar with the decision. The people spoke to The Associated Press on condition of anonymity Tuesday, July 28, 2020 because the contract has not been finalized.(AP Photo/Phelan M. Ebenhack, File)

COSTA MESA, Calif. (AP) — Anthony Lynn addressed many topics on Wednesday about the Los Angeles Chargers reporting to training camp, but the one thing he didn't have to discuss was a holdout involving one of his star players.

Any possibility of that happening became a moot point Tuesday night, when the franchise agreed to a five-year contract extension that will make pass rusher Joey Bosa the highest-paid defensive player in the NFL.

“Joey is tied down for a little while and we’re all excited about it. We have some other guys with contracts coming up but time will tell," Lynn said. “It's one less distraction you have to deal with.”

Lynn — who is entering his fourth season as coach — is well aware of how holdout distractions can affect everyone.

Last year, running back Melvin Gordon missed camp and didn’t report until the fourth week of the regular season. He ended up averaging only 3.8 yards per carry, down from 5.1 in 2018, and wasn't in sync for most of the season. Gordon ended up signing with Denver during the offseason.

“It didn’t work out with Melvin last year but glad it worked out now,” Lynn said. “It’s my job to build these players up and make them feel like Superman. When they want to get paid like Superman I step back.”

Bosa's extension is worth $135 million, including $102 million guaranteed. It surpasses the five-year, $125-million extension that Cleveland’s Myles Garrett signed two weeks ago.

Lynn said all 86 players on the roster have reported for camp and that he was not aware of anyone having to be placed on the COVID-19 reserve list. Players can end up on the list due to contact with someone infected by the virus or a positive test.

He also added that no players have approached him about opting out of the upcoming season.

Rookies reported last Saturday and already are going through conditioning workouts as well as walkthroughs with the coaching staff. The entire team will not be on the field until Monday.

Lynn's early messages to the team have been re-emphasizing that this far from a normal training camp due to coronavirus protocols in place and preseason games being cancelled. He has also been preaching self-discipline.

“Every day has been chaos. We have to welcome chaos. We are going to have to think about and re-emphasize with our players,” he said. “The goals have not changed but the most disciplined teams are going to be ahead. We have two opponents — our schedule and COVID-19. Both game plans are equally important.”

Lynn also doesn't have much time to prepare a team that has plenty of changes at critical positions after going a disappointing 5-11 last season. Tyrod Taylor is in the driver's seat to start at quarterback against the Bengals, but first-round pick Justin Herbert will also get his share of reps. Austin Ekeler takes over as the lead running back while the offensive line will have at least three new starters.

On defense, cornerback Chris Harris comes over from Denver and teams up with Casey Hayward and safety Derwin James on what has potential to be one of the best secondaries in the league.

“If you are a late bloomer or slow learner this camp is going to be a challenge,” Lynn said. “We have to be creative in how we approach practices because we are going to have to do more, but we have some good veteran coaches.”