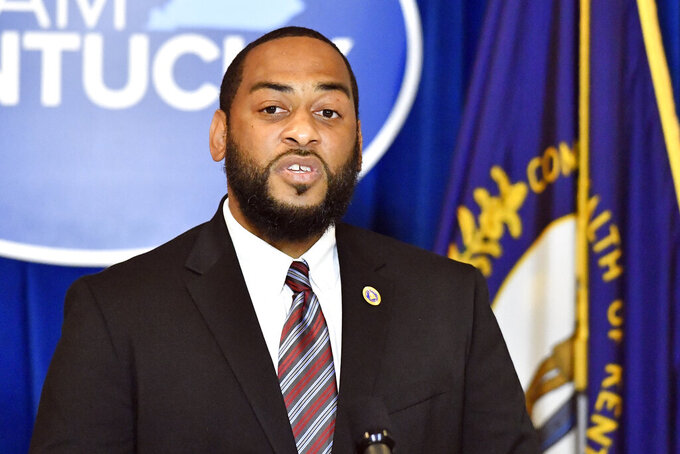 FILE - In this Sept. 23, 2020 file photo, Kentucky State Rep. Charles Booker addresses the media following the return of a grand jury investigation into the death of Breonna Taylor at the Kentucky State Capitol in Frankfort, Ky. Booker has raised more than $500,000 since forming an exploratory committee signaling his interest in challenging Republican U.S. Sen. Rand Paul next year in Kentucky. (AP Photo/Timothy D. Easley, File)

Booker, who nearly upset a well-funded Democratic rival in last year's primary for the seat held by Senate Minority Leader Mitch McConnell, said Wednesday that his fundraising in the past month shows he would “have the resources needed to win” if he were to enter the race against Paul.

Booker, a Black former state lawmaker, would face a decidedly uphill challenge against Paul in Republican-trending Kentucky, which has not elected a Democrat to the Senate since Wendell Ford in 1992. Paul, a former presidential candidate, will seek a third Senate term in 2022. Booker has not signaled when he will announce whether he's formally entering the campaign.

Kentucky voters would be given a clear choice if Booker challenges Paul.

Booker said Wednesday that the donations raised since forming his exploratory committee in April came from more than 13,000 contributors, with an average amount of nearly $29.

“I’m humbled and honored to see so many people across Kentucky and across America chipping in because of a shared belief in a better future,” Booker said.

Booker didn’t specify how many of the contributions came from Kentuckians.

Paul's campaign had more than $3 million in the bank at the end of March.

Booker’s formation of an exploratory committee was a step short of officially launching his candidacy, but he’s long been seen as a leading Democratic prospect for the 2022 Senate race in Kentucky. Forming an exploratory committee allows Booker to poll, travel the state, make phone calls and fundraise while testing the waters without officially declaring himself as a candidate.

Booker's early fundraising could solidify his position for the primary if he enters the race.

“If he keeps raising money at this pace, he will probably preclude any other strong candidate,” longtime political commentator Al Cross said.

Booker seized momentum late in last year’s primary on the strength of a “Hood to the Holler” campaign that highlighted the common interests of Black Democrats in the cities and middle- and low-income white people in the mountains of eastern Kentucky — which he collectively has defined as “people in forgotten places.”

He fell short in part because thousands of Kentucky Democrats had already cast ballots during an extended early voting period created to keep voters safe during the coronavirus pandemic, blunting the impact of his late surge.

But Booker would be campaigning next year in a state that has turned decidedly Republican. The GOP holds both U.S. Senate seats from Kentucky, five of the six congressional seats and has overwhelming majorities in both state legislative chambers. Democrat Andy Beshear holds the governorship, having narrowly defeated the Republican incumbent in 2019.