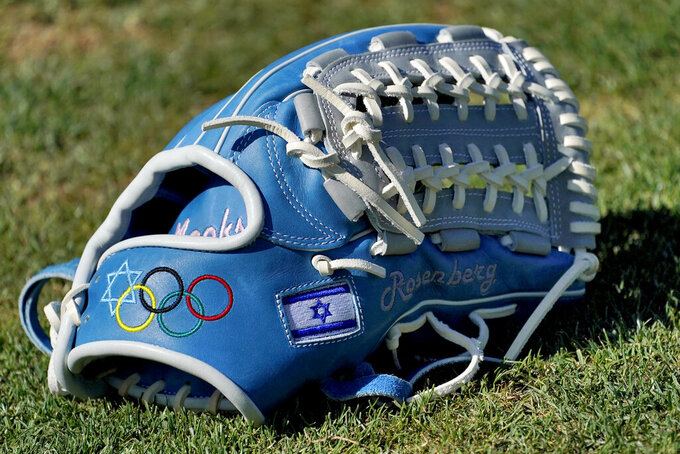 The glove of Israel Olympic baseball player Jake Roseberg sits on the field at Salt River Fields spring training facility, Wednesday, May 12, 2021, in Scottsdale, Ariz. Israel has qualified for the six-team baseball tournament at the Tokyo Olympic games which will be its first appearance at the Olympics in any team sport since 1976. (AP Photo/Matt York)

SCOTTSDALE, Ariz. (AP) — Danny Valencia ducked out of the scorching Arizona sun, reached into a cooler to grab an ice-cold drink and took a seat on the bench. The former Major League Baseball player savored the sweat dripping off his face onto the dugout floor, knowing he had found a second calling in the game of baseball.

Leading Team Israel to Olympic gold in Tokyo this summer.

“I wanted to play some meaningful baseball games,” Valencia said. “Before you knew it, I’m on a plane to Israel.”

The 36-year-old Valencia, who played nine years in the majors, is one of many Jewish-American players handpicked by Team Israel President Peter Kurz, who has labored for more than a decade to piece together a competitive baseball roster on the international stage. The roster consists of former big leaguers like four-time All-Star second baseman Ian Kinsler, catcher Ryan Lavarnway and pitcher Josh Zeid, along with several players who were in the minors or played college baseball.

They'll be part of the first team sport for Israel at the Olympics since the soccer team qualified in 1976 in Montreal. Israel qualified for Tokyo's six-team field in 2019 and spent the past week training in Arizona at the Arizona Diamondbacks and Colorado Rockies' spring training facilities to prepare for its games in Japan.

Kurz lives in Tel Aviv but made the trip to Arizona to see the roster he assembled. He got a big kick out of watching Kinsler and Valencia take ground balls while providing leadership for the team.

But he was also distracted, constantly checking WhatsApp on his phone to make sure his wife and three grown children were OK amid the escalating violence in the region.

“It hasn’t been easy,” Kurz said. “You see messages like ‘We’re going to the bomb shelter.’ My wife heard a lot of booms and then they went down under the staircase.

“You’re sitting here in a dugout, in paradise, watching our team that I put together. Then on the other hand, I see my wife is in a bomb shelter.”

Joining Team Israel took a sizable commitment for the players. Prospective Jewish-American players had to go through a process of “making Aliyah,” which includes gathering required documentation of family lineage, traveling to Israel and going through a process to become an Israeli citizen. Valencia made the trip with a few other players in 2019.

Valencia called his mother “the driving force” behind Judaism in their household. His father is also Jewish, converting to the religion after getting married.

“It was inspiring and spiritual, it was a lot different than I was expecting,” Valencia said of his experience making Aliyah. “I was able to give back a couple different times. It's an amazing place. I hope I go back again.”

Kinsler retired from MLB in 2019 and took a job with the San Diego Padres front office before Kurz reached out to see if he was interested in joining the team. The second baseman called the decision “a no-brainer” but his journey was almost derailed by the coronavirus.

His was one of the final flights that arrived in Tel Aviv in early 2020 before the country shut down the airport to try to stop the spread of COVID-19.

Kinsler — whose father's side of the family is Jewish — got a whirlwind tour of Israel and spent a few days at the youth baseball academy. He said the sport isn't particularly popular in Israel, but it's growing.

“I think the showing we have in the Olympics could lead to some excitement,” Kinsler said. "That's kind of the goal, to draw more kids to something outside and something active.”

Team Israel was an afterthought on the international baseball stage until 2017, when it finished in a surprising sixth place in a 16-team field at the World Baseball Classic. Kurz joked that some called Israel the “Jamaican Bobsled Team” of the WBC because of their underdog status, but by the end of the tournament, they had proven they belonged.

The good showing gave Kurz confidence the team was heading in the right direction.

But building a team for the Olympics was a harder task. In the WBC, players only needed to provide documentation that they could become a citizen of the country if they applied. For Tokyo, the players must actually be citizens of Israel.

The sport is likely to be dropped for the 2024 Olympics in Paris and then restored again for 2028 in Los Angeles.

Kurz also had to secure funding to help Israel's team make the trip to Tokyo. The Israeli Olympic organization usually only has to help a few individual athletes in sports like judo make the trip. A group of 24 players, coaches and support staff was an entirely different undertaking.

So Kurz teamed with the Jewish National Fund-USA to help provide money. JNF-USA is also helping provide funding to build baseball fields in Israel to help grow the sport and provide a facility where the national team can train.

“The growth of the sport in Israel has become paramount,” said Lou Rosenberg, executive director of JNF-USA. “Israeli Arabs and Israeli Jews are learning the game together — we call it ‘Baseball for All.'”

Rosenberg also hopes Team Israel's baseball success can help give the country something to remember from the Olympics other than the 1972 killing of 11 team members by terrorists at the Games in Munich, West Germany.

“Let's face it, Israel's Olympic reputation is built on tragedy,” Rosenberg said. “This is an amazing opportunity to perform on one of the world's largest sporting stages. When our flag is raised on the medal podium, and if we were to win and have Hatikvah (Israel's national anthem) played, I can't think of a better statement to combat anti-Zionism, anti-Semitism than seeing our guys on the world's sports stage."

Kurz talked with the players about the current violence going on in and around Israel after one of the practices this week. He was heartened to know all the players had actually spent time in the country, had a connection and a real interest in the situation.

For Valencia, the second home has provided a new purpose. The connection grows stronger each day.

“After having a nice big-league career, this is kind of icing on the cake, some closure in a sense,” Valencia said. “But also to inspire and motivate the youth over in Israel to pick up the bat and ball and see us out there. Hopefully, young kids will be watching and telling their parents ‘I want to be like them and play baseball.’”