Chen and winning streak in spotlight as Skate America begins 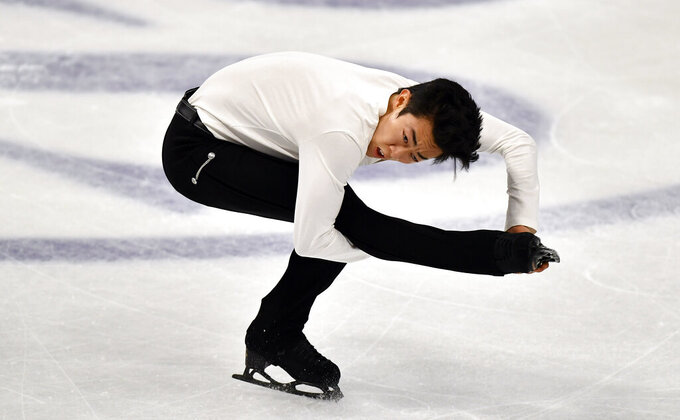 FILE - In this March 25, 2021, file photo, Nathan Chen of the United States, skates in the men's short program at the Figure Skating World Championships in Stockholm, Sweden. Since his disappointing sixth-place finish at the Pyeongchang Olympics, the 22-year-old Chen has won three world titles, the last three of his five U.S. championships, and the two most recent Grand Prix finals. He enters Skate America this weekend as the overwhelming favorite to win his fifth consecutive gold medal. (AP Photo/Martin Meissner, File)

Let this sink in: Nathan Chen has not lost a competition since February 2018.

Since his disappointing sixth-place finish at the Pyeongchang Olympics, the 22-year-old Chen has won three world titles, the last three of his five U.S. championships and the two most recent Grand Prix finals. He enters Skate America this weekend as the overwhelming favorite to win his fifth consecutive gold medal.

It's the expected first step toward what could be the crowning season for the man who has elevated the technical aspects of figure skating to the point that no jump, no spin, frankly no goal seems unattainable.

Not that Chen will say so. He's too occupied with what has gotten him to the peak, and what he must do to stay there heading toward and then at the Beijing Games in February.

“Over the past few years I had really great opportunities to compete at these competitions, and for the most part they all pretty much went to the best of my ability at that time,” Chen says. "Being at the previous Olympics did give me the new sort of insight to realize that skating — while it is incredibly important and the thing I have literally done every single day of my life since I was 3 — is also a passion project for me.

"I know I have a limited number of competitions in my life and to really to just make the most out of each competition and try to enjoy myself the best I can. And when I find I am able to sort of adapt that idea, I am able to skate better, more than worrying about what the outcome might be.”

There was tremendous anticipation what the outcome might be in South Korea, and then Chen skated perhaps the worst short program of his career in the individual event. He rallied with a spectacular free skate but still fell short of the medals podium.

That hasn't happened since, and each time he has been on the top step of that podium. The only likely challenger in Las Vegas this week is 2018 Olympic silver medalist Shoma Uno of Japan, though Chen has distanced himself from Uno and his countryman, d ouble Olympic champion Yuzuru Hanyu, in recent events.

Chen doesn't block out or discard memories of Pyeongchang. Like most elite athletes, he uses that as an educational and motivating tool.

“As for learning from the past Olympics,” he says, “... I definitely made an error in the past games in that I changed around my layout a little too much. And that is definitely something that is a necessity depending on how my body feels, how the ice feels on my boots, so many variables. The more I can narrow that down to get closer to something I feel comfortable with when it gets closer to that time, the better it will be.”

For now, the buildup to Beijing means two Grand Prix events, the Grand Prix final he almost surely will qualify for, and nationals in early January in Nashville. Chen is on a 1 1/2-year break from school at Yale so he can keep his focus on his sport.