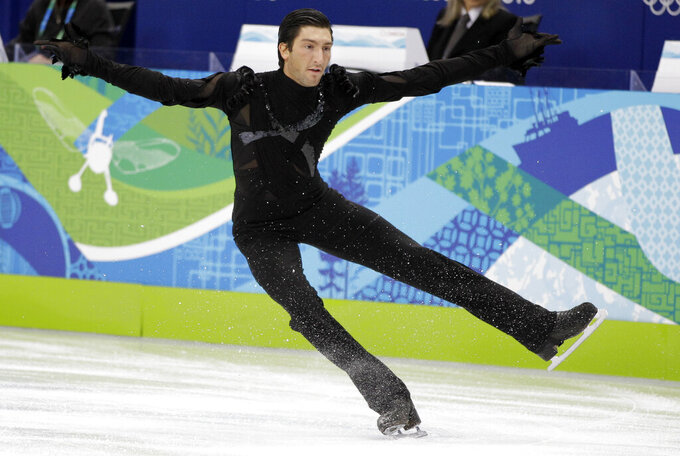 FILE- United States' Evan Lysacek performs his short program during the men's figure skating competition at the Olympics in Vancouver, British Columbia, Feb. 16, 2010. Nathan Chen, who goes for his sixth consecutive national championship this week at what amounts to the Olympic trials for next month's Beijing Games, has spoken with 2010 gold medalist Lysacek about the path to the top of the podium. Lysacek won in Vancouver with an unmatched artistic program even though he never had the jumps Chen has. Nowadays, every elite male skater has those jumps, led by Chen and his mastery of the quad. (AP Photo/Mark Baker, File) 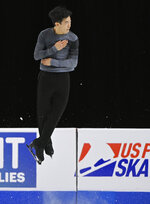 NASHVILLE, Tenn. (AP) — Nathan Chen already is one of America's most accomplished figure skaters. That doesn't mean he wouldn't take advice from a predecessor.

Chen, who goes for his sixth consecutive national championship this week at what amounts to the Olympic trials for next month's Beijing Games, has spoken with 2010 gold medalist Evan Lysacek about the path to the top of the podium.

Lysacek won in Vancouver with an unmatched artistic program even though he never had the jumps Chen has. Nowadays, every elite male skater has those jumps, led by Chen and his mastery of the quad.

But Chen understands that heading to and then on the Olympic ice, everything must come together. That didn't happen for him in 2018, when an awful short program — probably the worst performance of his career — plummeted him so deep in the standings that winning the free skate, which he did, couldn't lift him onto the podium.

Asked whether he had spoken with any of the past U.S. champions, Chen mentioned Lysacek.

“There hasn’t been really an in-depth conversation, I think the closest I have had was just being able to spend a little bit of time over the past year seeing Evan,” he said. "He visited the rink a few times and he previously worked with Raf (Arutunian, his coach), so they have a really good relationship.

“Conversations were pretty brief, but just sharing some of the worries or things I have sort of dealt with over the past few years, kind of similar things he has dealt with. Kind of framing perspectives around the Olympics and how although it is an extremely meaningful event, at the end of the day, whether you win, whether you lose, you are still going to go home and see your same friends and families; still do the same activities. One moment is not going to define the rest of your life in regards to the Games or even just in the sport.”

Chen went on a nearly unprecedented streak of success following the Pyeongchang Games. He won every competition until Skate America in October as the buildup to Beijing began. A third place there was followed by — yep — another victory, at Skate Canada.

Chen might not be a lock for another U.S. title; he lost to Vincent Zhou at Skate America. But he certainly is a cinch to make the Olympic squad no matter how he performs.

And given his track record, Chen will perform spectacularly this week.

“I have had a pretty long stint of training from Skate Canada till now, but looking forward to competing again,” he said. "Of course, the (Grand Prix) finals being canceled was unfortunate, but ultimately the safety and health of everyone is the most important thing. The decision was completely understandable and the right one.

“I’ve been playing around with different layouts and different programs I have done. In Nashville my content will be seen there and I’m looking forward to that.”

The figure skating world also is looking forward to a showdown in China between Chen and the strong Japanese skaters, led by two-time Olympic champ Yuzuru Hanyu. Although he has been plagued by injuries in recent years, Hanyu made his first appearance of this season in sensational fashion, winning his national title. Indeed, he attempted but did not fully rotate a quadruple axel, which involves 4 1/2 rotations and never has been done in competition.

Chen makes a habit of watching his competition. Not to scout, but for enjoyment.

“It is good to be able to watch skating,” he said. “Even if I wasn’t competing I would still want to watch. It will be exciting to see how everyone is doing. Will that really impact how I plan? Probably not. But it is still useful, I think, to sort of have an understanding of where everybody is at. But more than anything, skating is fun to watch, so I will be watching for that reason.”

American skating fans will be watching closely, too.