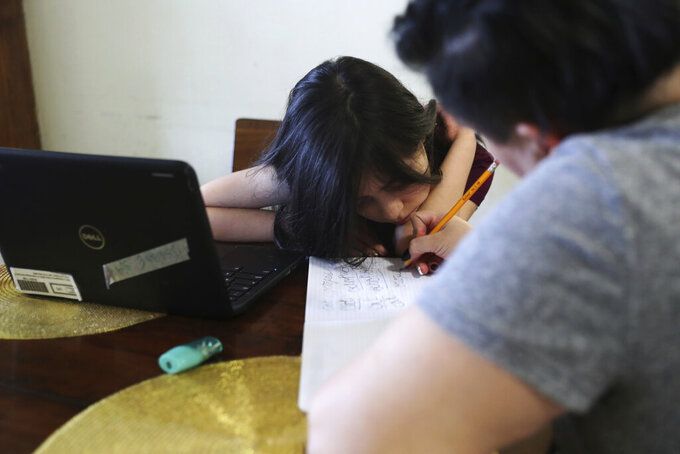 Chicago parent Rosa Esquivel, right, helps her 10-year-old daughter Veronica Esquivel, who attends Andrew Jackson Elementary School, with her homework after virtual school hours, Wednesday, Feb. 10, 2021, at their residence in Chicago's predominantly Hispanic Pilsen neighborhood. Rosa is not sending her children to school and doesn't believe that the schools will be safe from the coronavirus, which made her mother and sister sick and killed an aunt and uncle in her native Guatemala. (AP Photo/Shafkat Anowar)

CHICAGO (AP) — Chicago parents Willie and Brittany Preston have spent nearly a year wrestling with online school schedules for their six children, often with everyone hovered over devices around the dining room table.

Willie Preston, who runs a small construction firm with his wife, said there’s no place that can guarantee a coronavirus-free environment but he feels safe with the district’s steps: cleaned buildings, daily health screenings, new air filters and required masks.

“We just are not trained educators and we recognize our limitations,” he said. “For me as a parent, it makes me feel like we’re beating COVID and we’re going to get our lives back. And that’s good.’’

In the next few weeks, four of his children will go back as part of the district's gradual reopening plans for pre-K-8. The Chicago Teachers Union accepted the plan after weeks of bitter talks that included defying district orders, threats from the city that they would be locked out of district teaching and a potential strike.

Under the deal, the city will set aside 1,500 vaccinations each week for teachers after an initial 2,000 doses for those who are returning first. There are also metrics allowing for schools to shut down when infections spike, for instance outbreaks in multiple classrooms over a short period. The agreement also makes plans for teachers who are at higher risk of getting seriously ill from COVID-19 or take care of someone who is.

Preston’s two high school children will keep learning online at their home on the South Side. The district hasn’t rolled out a plan for high school students to return, which is expected to prompt more negotiations.

Mayor Lori Lightfoot has argued for months that schools needed to reopen. She's said since going fully remote in March, online learning hasn't served many in the roughly 340,000-student district, particularly Black and Latino students who comprise the majority.

Schools worldwide have grappled with the same issue, including union disputes in Philadelphia. New York City announced this week that it would reopen middle schools after closing during a virus surge in November. Some are contemplating continuing remote learning in the fall.

In Chicago, students in pre-K and special education briefly returned last month, including Preston's youngest daughter, before stopping amid an intensifying fight with the union.

Even after agreeing to the district’s safety plan this week, the union continued arguing that that the district hasn’t done enough to protect teachers and too few students have been interested in returning. Roughly 3,200 pre-K and special education students briefly returned last month, about 19% of those eligible. In a December parent survey, about 77,000 of eligible students said they wanted to return, but it's unclear how many will show up.

Rosa Esquivel said she won’t send her two children, ages 10 and 12, because she doesn’t believe that the schools will be safe from the virus that hit her mother and sister and killed an aunt and uncle in her native Guatemala.

She worries that her diabetes and her husband’s high blood pressure could put their own lives at risk if their kids brought the virus home from school. And they have no idea when they will get access to the vaccine.

“We just thought it was best for us to have the kids stay remote,” said the 40-year-old Esquivel, who lives in the predominantly Hispanic Pilsen neighborhood. Esquivel said she struggles with anxiety because of infections in her family and she doesn’t want to worry anymore.

Single mother Natassia Ballard, who lives on the city's South Side, said she’s holding off for now, but may change her mind when the weather improves and flu season ends.

She wants to know that the teachers her two elementary-age children interact with are vaccinated. But it has been hard. One son has autism and is missing out on hands-on learning from class.

“He really wonders how he will fit in when the world opens up again,” she said.

Preston said his youngest child was looking forward to Thursday and seeing friends again. She cried when her school closed again last month.

Preston, part of a citizen group called the Black Community Collaborative, said they've had to make sacrifices over the past year. His wife has scaled back work at the firm to oversee six school schedules. Online classes present their own problems, like when teachers’ internet cuts out and the kids insist on video games or watch television. And if his high school students can't focus working in their rooms, they must “report to the dining room,” he joked.

“These kids are exhausted from being essentially locked in for a year, and that’s hard,” he said.