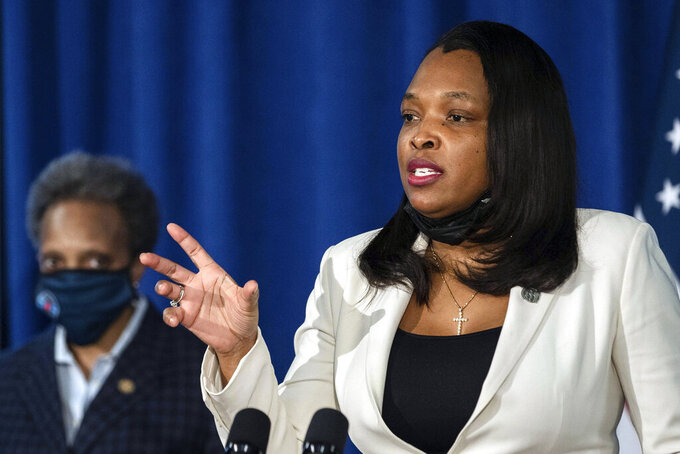 Chicago Public Schools CEO Janice Jackson speaks during a press conference at City Hall with Chicago Mayor Lori Lightfoot,, Thursday morning, Feb. 4, 2021, in Chicago. Mayor Lightfoot demanded Thursday that the city's teacher's union reach agreement on COVID-19 safety protocols by the end of the day and bring students back to the classroom, but did not say what she would do if that doesn't happen. (Pat Nabong/Chicago Sun-Times via AP)

CHICAGO (AP) — Chicago Mayor Lori Lightfoot said Thursday that the city was reviewing the teachers' union latest proposal on COVID-19 safety protocols to return to classrooms, a development hours after her demand for a deal by the end of the day.

Lightfoot had accused the Chicago Teachers Union of refusing to give her office and school district officials a straight answer on its demands after hours of waiting.

“We need to get a deal done and get it done today. I expect to hear from them, no more delay," she said at a news conference. A statement later in the day from Lightfoot and Chicago Public Schools CEO Janice Jackson said a counter proposal was received and officials were “working on a response.”

But while Lightfoot seemed to threaten the union with action, she declined to say what she would do if no deal was reached by day's end.

Part of the reason could be that students do not have class Friday. That means the union and the city could continue to negotiate through the weekend, though Lightfoot made it clear she's not interested in Sunday night negotiations.

The nation's third-largest district and union have been fighting for months to reopen city schools, which went fully remote last March. The district has rolled out a gradual return for pre-K to 8th grade with no definitive plans for high school.

Thousands of K-8 students were expected to return this week. Lightfoot had said teachers who didn’t report for duty would be locked out of online teaching systems, as was the case for pre-K and special education teachers who defied district orders last month. The 25,000-member union countered by saying it would picket if teachers were booted out. But district officials scrapped the threat and called a “cooling off period" that expired Thursday.

The union argues that the district’s safety plan falls short. CTU officials on Thursday accused the city of being late to the bargaining table in months of talks, leading to “11th hour" discussion.

“Our goal is, and has always been, a mutually agreed upon safe reopening plan for our schools. These decisions, however, cannot be made unilaterally in a vacuum. They require buy-in from all stakeholders in our school communities, and we will continue to lift democracy in soliciting feedback from educators and families in bargaining for the safe return that our students deserve,” CTU said in a statement.

Among the issues are widespread vaccinations for teachers, allowing educators to continue remote instruction if they have a valid excuse and different metrics to gauge infections.

Lightfoot reiterated what she has been saying for days: It is safe for children and teachers to return to schools after CPS spent roughly $100 million on its safety plan, including purchasing air purifiers, deep cleaning schools and offering COVID-19 testing for teachers. She has said that remote learning isn't working for all students, particularly many Black and Latino students who make up the majority of the district.