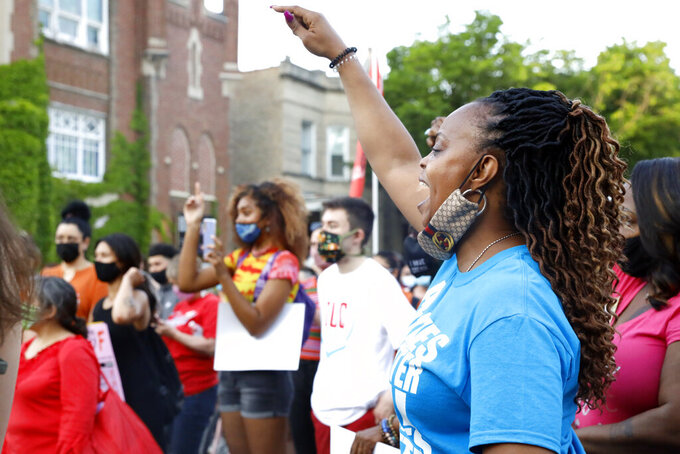 People gather to protest Chicago Mayor Lori Lightfoot's policies near her home on the two-year anniversary of her inauguration, Thursday, May 20, 2021 in Chicago. (AP Photo/Shafkat Anowar)

CHICAGO (AP) — Lori Lightfoot had her work cut out for her when she became mayor of Chicago in 2019, running as a progressive Democrat and outsider who would bring big change to City Hall. Among her early challenges: a troubled police department, deep financial problems, entrenched inequality, a teacher strike and a president who liked to pile on via Twitter.

Then the job got really difficult.

Lightfoot acknowledged this week that she hasn't accomplished much of what she had hoped when she replaced former Obama chief of staff Rahm Emanuel as mayor of the nation’s third-largest city, promising to do the job better. The pandemic and protests over police violence upended many of those plans, she said, adding she is “unbelievably proud” of what her administration has done.

But as she reaches the halfway point of her four-year term on Thursday, she faces an abundance of critics over her performance, and dozens of people protested near her home. Lightfoot drew new scrutiny this week by announcing that she would do one-on-one interviews about her tenure so far only with journalists of color because of the “overwhelming whiteness and maleness" of city media.

Lightfoot's struggles have ignited new questions over whether big city mayors' problems these days mostly lie with flawed officeholders who overpromise or with the job itself. Some cities, especially Chicago, now seem to stagger from one mayor under attack to the next.

“The reality is, I’m the mayor. I’m the target,” said Lightfoot, 58, who is Chicago’s first Black woman and first openly gay mayor. “People are unhappy, people are angry. And criticism comes with the job.”

Lightfoot is dealing with limitations that have confronted other progressive Democrats elected in recent years as cities have grown more left-leaning, as to what political or legal power they actually have to get things done, said Richard Schragger, a University of Virginia law professor who has written about mayoral powers.

What these mayors want to do often requires approval from state government or is constrained by the political realities of representing sometimes millions of people with different interests. A progressive mayor whose supporters have called for defunding police, for example, enters office with a slightly hostile relationship to police, even as the mayor needs to rely on officers to police the city or help implement reforms.

“They're operating in an environment where making change is really hard,” Schragger said.

As for the campaign promises? “It's very hard to run on a platform of ‘I’ll do what I can within the constraints that restrain me.'”

The pandemic highlighted some of the handicaps faced by Democratic mayors in states controlled by Republican governors. In Texas, for example, the Democratic mayor of Houston wanted to keep a mask requirement in place, but Republican Gov. Greg Abbott lifted the mask mandate statewide. But roadblocks exist even when mayors, governors and Legislatures are controlled by the same party. In New York, Mayor Bill de Blasio tried for years to raise taxes on the highest earners but met with resistance from a fellow Democrat, Gov. Andrew Cuomo.

Lightfoot has clashed with Democratic Illinois Gov. J.B. Pritzker. He recently signed union-backed legislation regarding firefighter pensions despite Lightfoot's objection that it would add to Chicago's financial stresses. She blasted the move as typical Springfield lawmakers “cutting backroom deals.”

Chicago Public Schools, which serves some 300,000 students and has a roughly $8 billion budget, has been a particular problem for Lightfoot, with its shaky finances and academic shortcomings — one of the inherited issues she was supposed to improve. The mayor controls the district through an appointed school board, but she has tussled repeatedly with the Chicago Teachers Union, which backed Lightfoot's Democratic opponent in the 2019 mayoral runoff.

Democratic lawmakers in the state capital are backing a plan to wrest control from the mayor's office and create an elected school board in Chicago. Lightfoot, who said during the campaign she would support an elected board, is now pushing instead for a board with some elected but most appointed.

Cassandra Kaczocha, a mother of two who lives on Chicago’s North Side, was an early supporter of Lightfoot and voted for her over roughly a dozen other candidates, calling her “the anti-Rahm.” Emanuel was criticized as too hard-charging and business friendly at the expense of working class and poor residents. Lightfoot talked about equity and listened to people, said Kaczocha, whose family is Black and wanted to see the new mayor address inequality in education, policing and other areas.

But her shift on the school board issue is the kind of broken promise that Kaczocha can't accept.

“I thought she'd govern like she campaigned, and we didn't get that,” she said. “We got a very dictatorial style of governing, just like we did with Rahm, and it's disappointing.”

Lightfoot has also angered activists by opposing a plan for civilian oversight of the police department and over news that her administration spent roughly $280 million of COVID relief funds to cover the cost of police personnel, including for security at COVID-related sites.

Residents in a predominantly Latino and Black highly industrial neighborhood on the city's southeast side protested for months over the relocation of a metal shredding facility from the predominantly white North Side to the former site of Republic Steel, saying the air they breathe already is overly polluted. And Lightfoot was criticized following the wrongful police raid before she became mayor of a Black woman who wasn't allowed to put her clothes on, an incident she learned about in late 2019 but that the city fought to keep under wraps.

Meanwhile, gun violence in the city has increased. She's also seen a number of top staff leave her administration, including most recently the head of Chicago Public Schools.

Lightfoot is touting the things she has been able to accomplish, including battling COVID and providing vaccines “in a data-driven and equitable manner" and working with businesses and philanthropic groups to invest in certain neighborhoods on the city’s south and west sides. Her team's work saved lives, she said.

“No easy decisions, not one, but I’m proud of the work that we’ve done," Lightfoot said. "I go to sleep at night comforted in the knowledge that every day I have worked my tail off for the residents of this city and I will continue to every day.”