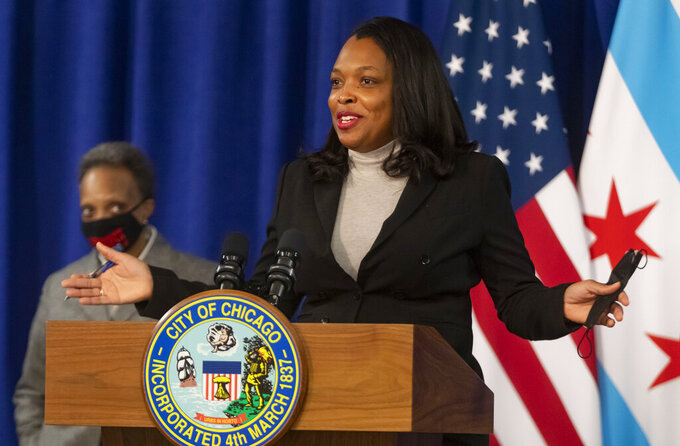 Chicago Public Schools CEO Janice Jackson speaks during a news conference as Mayor Lori Lightfoot, background, listens, Sunday, Feb. 7, 2021, at City Hall in Chicago. Jackson and Lightfoot announced that a tentative agreement has been reached with the Chicago Teachers Union to reopen schools. The proposed deal is subject to an approval vote by CTU's House of Delegates. (Brian Cassella/Chicago Tribune via AP)

Some students could return to classrooms as soon as Thursday, with the reopening of school phased-in by grade. Also, the city agreed to vaccinate 1,500 teachers and staff weekly at vaccination sites dedicated to Chicago Public Schools. The possible deal — which still requires approval from the Chicago Teachers Union —- also includes metrics that would trigger school closings when cases spike.

The union and district have been fighting for months over a plan to gradually reopen the roughly 340,000-student district, with talks breaking down in recent days on issues including vaccinations. Lightfoot and CPS officials had threatened to lock educators out of teaching systems multiple times, which the union said would lead to a strike for the second time in less than two years.

By Sunday, the first-term mayor who had been visibly agitated at recent news conferences, was smiling.

“This agreement was about making sure everyone in our school communities just aren’t safe, but also that they feel safe,” Lightfoot said, calling the last 11 months a “whirlwind for the entire city.”

While she called it a “tentative agreement," the union characterized it as an offer that required further review.

“We do not yet have an agreement with Chicago Public Schools,” CTU tweeted on Sunday. “We will continue with our democratic process of rank-and-file review throughout the day before any agreement is reached.”

It was unclear when the union would begin voting. The union's house of delegates would have to decide whether to send the proposal to the roughly 25,000 members for approval.

CPS officials have said opening schools is safe and that remote learning isn’t working for all students, including many Black and Latino students who make up the majority of the district. Union officials had argued that the district’s plan, which included air filters in classrooms and voluntary COVID-19 tests for teachers, didn’t go far enough

Illinois rolled out its latest vaccination phase last month that includes teachers, though supplies have been limited.

Schools CEO Janice Jackson said Sunday that 2,000 teachers and staff returning to work sooner and living “in medically vulnerable households” would get first dibs on vaccinations starting this week. After that, the city would begin vaccinating teachers at dedicated city sites, which is on top of a Chicago program prioritizing those who live or work in neighborhoods with the high infection rates.

The agreement also outlined metrics for temporarily suspending classroom learning districtwide — which includes seven consecutive days of test positivity rates — and for individual schools, according to CPS' outline of the deal Sunday. The district said it would continue to grant permission for some employees to continue remote teaching if they have increased risk for severe illness from COVID-19 or serve as primary caregivers for someone with higher risk.

Pre-K and special education students briefly returned last month, but then stopped amid the escalating fight with the union, which voted to continue remote teaching and reject the district’s plans. Teachers and students in K-8 were supposed to return Feb. 1. for the first time since going fully remote last March. The district had offered K-8 students two days of in-person instruction.

The union had said that if the district locked out teachers, as it has done previously, teachers would picket. Such a move would have cut off virtual learning for all students. The union last went on strike in 2019.

About 77,000 students from pre-K to 8 expressed interest in returning to class in a December survey. While pre-K and some special education students were offered in-person classes five days a week, students in K-8 were offered two days a week of in-person instruction with remote class on other days.

Attendance has been lower than expected.

Roughly 6,500 of the nearly 17,000 eligible preschool and special education students said they’d like to return, but only about 3,200, or 19% of those eligible, attended after the January reopening, CPS said.

The district and union have previously reached an agreement on other aspects, including ventilation and contact tracing.