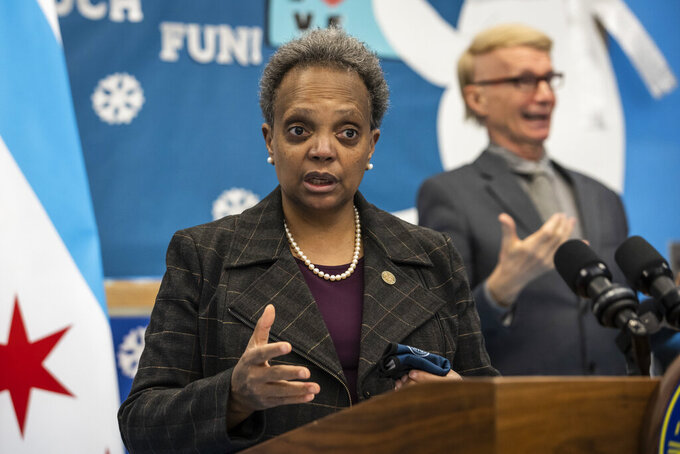 CHICAGO (AP) — Chicago Public Schools leaders extended remote learning Monday for two more days and called for a "cooling-off period” in negotiations with the teachers' union, citing progress but not a full agreement on COVID-19 safety plans for returning to schools.

Mayor Lori Lightfoot and Chicago Public Schools CEO Janice Jackson said in a joint statement that teachers would not be locked out of teaching platforms for failing to show up to schools “as a gesture of good faith,” walking back earlier threats that had prompted union officials to entertain a strike in the nation's third-largest school district.

“We have secured agreement on one other open issue and made substantial progress on a framework that we hope will address the remaining issues,” they said in a statement after negotiations Monday. “We are calling for a 48-hour cooling off period that will hopefully lead to a final resolution on all open issues.”

Talks, which have been ongoing for months, stalled over the weekend, ratcheting up the possibility of a strike as early as Tuesday. Issues have included vaccinations, metrics used to gauge infections and special accommodations for employees who have concerns, like a high-risk family member in their household.

Chicago Teachers Union President Jesse Sharkey, who has said the union wants an agreement, said holding off on locking out educators is an encouraging step.

“We want to keep working remotely as we bargain an agreement to return to our classrooms safely," he said in a statement. "And we’re one step closer to that goal today, because management has agreed to stay at the table rather than escalating conflict or locking out educators.”

Roughly 62,000 students and about 10,000 teachers and staff in K-8 were expected to start school Monday for the first time since last March, part of the district's gradual reopening plans during the pandemic. Jackson said all teachers, including those in pre-K and special education who started in-person in January, were expected to show up Monday or would be booted out of district systems as they have previously. But students' arrival was delayed a day because of anticipated staffing shortages. Now, students will continue remote class at least until Thursday, district officials said.

The union, which has defied orders to come to class ahead of students, has said if the district locks teachers out, all teachers will picket. Such a move, if approved by the union's house of delegates, could shut down remote learning across the roughly 340,000-student district.

School officials and the union reported weekend progress on issues including contact tracing and ventilation. But by Sunday evening, both sides accused each other of failing to show up at the bargaining table and said significant disagreements remained. Negotiations were expected to resume Tuesday after meeting Monday.

The district spent roughly $100 million on ventilation and other safety measures including classroom filters and is offering a voluntary testing program. But the union says those measures don’t go far enough and without more protections, remote learning is safest.

District officials said Black and Latino students, who make up the vast majority of the district, have been especially hard hit since going fully remote last March. Pre-K and some special education students returned Jan. 11, but went back to online classes amid the escalating fight with the union. District officials haven't said when high school students will return.

The union also argues that not enough students are interested in classroom learning to require all teachers to come back at once.

About 77,000 students from pre-K to 8 expressed interest in returning to schools in a December survey. While pre-K and some special education students were offered in-person classes five days a week, students in K-8 will get two days a week of in-person instruction with remote classes on other days.

But attendance has been lower than expected.

Roughly 6,500 of the nearly 17,000 eligible preschool and special education students said they'd like to return, but only about 3,200, or 19% of those eligible, attended after the January reopening, CPS said.

The district has said if teachers fail to show up for in-person classes it would amount to an illegal strike.

The roughly 25,000-member union’s collective bargaining agreement, approved after a 2019 strike, prohibits its members from striking during the terms of the contract and bars district officials from locking out workers.

However, the union maintains the district would be forcing the work stoppage by locking out teachers and a strike would be based on unfair labor practices, not the terms of the contract.

Illinois recently rolled out its latest vaccine phase that includes residents ages 65 and older and teachers. But districtwide efforts to vaccinate teachers won't begin until the middle of February. City officials say there are many priority groups and not enough doses.