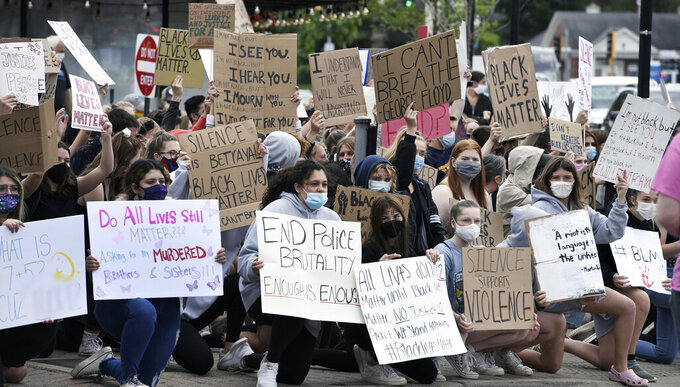 Protesters hold signs at the corner of Chicago Ave. and Washington Street in Naperville, Ill., Monday, June 1, 2020. Protests were held throughout the country over the death of George Floyd, a black man who died after being restrained by Minneapolis police officers on May 25. (Mark Welsh/Daily Herald, via AP)

CHICAGO (AP) — The general public will be allowed to enter Chicago’s central business district and its commercial areas Wednesday, several days after roads were closed to limit access after violence erupted in the wake of marches protesting the death of George Floyd, Mayor Lori Lightfoot was announced Tuesday.

The resumption of access to the downtown area comes as the city begins to reopen after weeks of being shutdown as a result of the coronavirus pandemic.

Officials said exit ramps from nearby expressways that were closed will reopen and Chicago Transit Authority trains and bus service will be restored after being shutdown after weekend violence that saw stores broken into and burned.

Bridges over the Chicago River will be lowered to allow access from the city’s North Side. However, officials say some exits from Lake Shore Drive will remain closed.

Cicero officials warned residents to “stay home and stay off the streets” and declared a “state of emergency” a day after violence and destruction erupted in the town of about 84,000 west of Chicago.

Police, who responded to 41 calls of gunfire, said most of Monday's chaos stemmed from residents trying to defend businesses. Roughly 60 people were arrested, mostly for burglary and weapons violations. Two people died in separate shootings around 6 p.m. related to the violent clashes: a 27-year-old Cicero man and 29-year-old Chicago man.

“We stand with everyone who is outraged by the death of George Floyd," said Police Superintendent Jerry Chlada. “Unfortunately, some people were not protesting peacefully and took advantage of the situation.”’

Floyd, a black man, died after a white Minneapolis police officer pressed Floyd’s neck with his knee as the man pleaded he couldn’t breathe. Protests over his death and wider issues of race and police brutality have been followed by chaos for days, particularly around Chicago.

Timothy O’Donnell is charged with arson. In a criminal complaint filed Tuesday, photos show O’Donnell, 31, holding a lit object and putting it in the gas tank of Chicago Police Department SUV. Authorities say that although he was wearing the mask, he was identified through a ``PRETTY” tattoo seen on the person’s neck. A family member directed authorities to O’Donnell, who was arrested Monday at his apartment.

The charge against O’Donnell follows charges filed Monday in Minnesota against Matthew Lee Rupert of Galesburg. Rupert is accused of traveling to Minneapolis, and then Chicago, to loot and riot. Rupert was arrested in Chicago and will be sent in federal custody back to Minnesota.