Chiefs encouraging fans who show up to keep their masks on 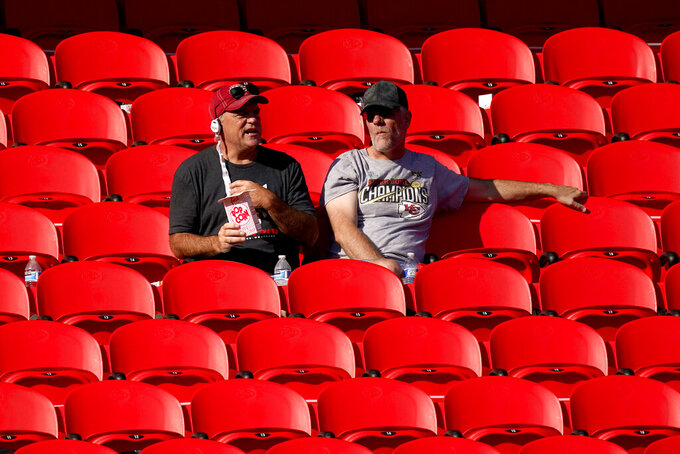 Fans watch the Kansas City Chiefs during an NFL football training camp Saturday, Aug. 22, 2020, at Arrowhead Stadium in Kansas City, Mo. The Chiefs opened the stadium to 2,000 season ticket holders to watch practice as the team plans to open the regular season with a reduced capacity of approximately 22 percent or normal. (AP Photo/Charlie Riedel)

There were plenty of videos making the rounds on social media afterward that showed many were not.

It was the first chance for Kansas City fans to glimpse the Super Bowl champions after an offseason scuttled by the coronavirus pandemic. The Chiefs were forced to move training camp from the fan-friendly Missouri Western State University to their locked-down home base just across the parking lot from Arrowhead Stadium.

The roughly 2,000 season ticket holders that were allowed to watch the workout were required to wear masks, just as fans will be when 22% of capacity is allowed for the season opener Sept. 10 against Houston. But plenty of tweets, posts on Instagram and Facebook feeds showed fans wearing masks incorrectly or not at all — contradicting rules set down by the Chiefs and regulations that have been encouraged by local and state authorities.

“I've heard the things about the masks. Actually, when I looked up, I mentioned to one of the guys, ‘Everyone has masks on. Kind of an unusual thing,'" Reid said. “Someone said some removed them. We're working on it. I know we have the best fans in the National Football League and they know they have to keep the masks on, just like the players in the meetings. Any time they're off the field, they have to have their masks on.”

Whether they like it or not, the Chiefs are setting an example for the rest of the league. They were the first to allow any fans at a training camp practice, and they will expand the total to about 5,000 this coming Saturday's workout. And they will be the first team to take the field with fans — about 17,000 of them — in the stadium for an actual game.

“Everybody is watching,” Reid acknowledged. “We take a lot of pride in that.”

Mahomes also doesn't want the Chiefs to waste an opportunity. Even a small number of fans represents an advantage, a point driven home earlier Monday when the Dolphins announced they would allow up to 13,000 fans for their opener against Buffalo. That prompted Bills coach Sean McDermott, whose team has barred fans from home games, to cry foul.

“I think it’s honestly ridiculous that there will be on the surface what appears to be a playing field that’s like that," he said, “inconsistently across the league with the different away stadiums.”

Fifteen of the 32 teams in the league have ruled out spectators, and those going ahead with fans have decided to limit them by varying degrees. The Chiefs are using this past weekend's practice and next week's open workout as test runs for their masking and social distancing measures, which extend into the parking lots for the popular pregame tailgates.

“I think with having the fans there, it gave you the energy, just being out there — the fans cheering, you get to see the passion they have,” Mahomes said. “I think there were only 2,000 people there, but it was loud. I was pleasantly surprised.”

He also was encouraged that most of the people he saw were wearing masks, and that there were empty rows separating groups of fans in the 70,000-seat stadium. But later Mahomes saw the videos on social media of some fans who took off their masks, despite the percentage of positive COVID-19 tests in Missouri being among the highest in the nation.

“It's a learning process,” Mahomes said, “but I'm sure security will emphasize that you have to has the mask on, not only for yourself but the people around you. I think that's what the practice was for, and next week we'll do it again.”

If anybody can persuade reluctant fans to wear masks, it's probably the reigning Super Bowl MVP, who just signed a record-setting 10-year extension that could be worth a half-billion dollars by the end of it. The young superstar has become so popular that RAYGUN, an eclectic clothing boutique in the fashionable Crossroads Art District of Kansas City, released a set of masks that read: “Help keep Patrick Mahomes safe: Wear a mask.”

“We have these protocols in place,” Mahomes said, “so we can go into the season and have the support of Chiefs Kingdom.”