Chiefs to rest Mahomes, other starters vs Chargers this week 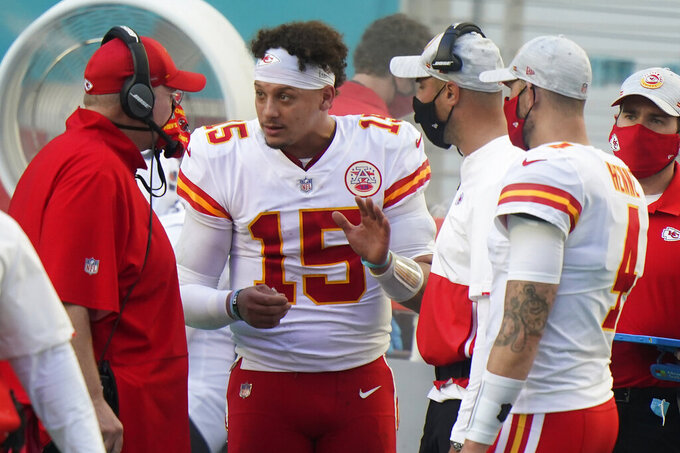 KANSAS CITY, Mo. (AP) — The Kansas City Chiefs plan to rest the majority of their starters against the Los Angeles Chargers on Sunday, choosing to risk a bit of rust over the danger of injury with the No. 1 seed and first-round playoff bye already secured.

Chiefs coach Andy Reid declined to say which starters would sit, though he did indicate veteran Chad Henne will start at quarterback and Matt Moore will likely be promoted from the practice squad. That means it's nearly certain Patrick Mahomes, who needs just 260 yards passing to reach 5,000 for the season, won't step foot on the field this week.

The Chiefs (14-1) certainly have a long list of injuries that they would like to see cleared up.

Tyreek Hill is dealing with hamstring spasms that caused him to be limited last week, though he ultimately played in a 17-14 win over the Falcons. Fellow wide receiver Sammy Watkins left the game with a calf strain and LeVeon Bell was limited with a swollen knee, compounding a depth problem at running back, where Clyde Edwards-Helaire has a high ankle sprain.

None of them practiced Wednesday. Nor did linebacker Ben Niemann (hamstring strain) or offensive lineman Mike Remmers (back), and linebackers Anthony Hitchens (COVID-19) and Damien Wilson (bruised knee) also could be out.

“It's a contact sport,” Reid said, “so there's danger. There's danger in practice, danger in games. But I try to look at the positive part of it and I just think, ‘What a great opportunity.’ These guys have busted their tails in a lot of ways. If you want to get in a regular game and you haven't up through Week 16 here, then my gosh, here you go.”

One thing Reid has working in his favor is new roster rules from the collective bargaining agreement and COVID-19.

Beginning this season, gameday rosters increased from 46 to 48 players provided eight of them are offensive line. Teams also can carry up to 55 players during the week, an increase of two, by promoting practice squad members the day before a game.

Practice squads also increased from 10 players to 16 for this season, and as many as six players can have more than two accrued NFL seasons — that rule has allowed the Chiefs to stash Moore there all season.

Regardless of who takes the field, the Chiefs don't plan to give the game away. They hardly played their best against Atlanta last week, and there's something to be said for taking some momentum into the playoffs. Plus, they have a chance to match the 2011 Packers for the best regular-season record by a defending Super Bowl champ with a win.

“It would be a great opportunity, not only for myself but for this team, this franchise,” said Henne, who hasn't started an NFL game since Sept. 21, 2014, when he was with Jacksonville.

“They signed me this past year to come in for these opportunities, so we'd be ready. To give back to them like they've given back to me would be tremendous.”

Henne has been around for a while, though. The biggest value Reid sees in playing the backups this week is to get some experience for his younger guys. The pandemic wiped out rookie minicamp, voluntary summer workouts and the entirety of the preseason schedule, dramatically cutting down the reps they might normally have received.

“The main goal is to just stay the course,” said cornerback L'Jarius Sneed, who has overcome all of that to become one of the indispensable players on defense as a rookie, when asked what his role will be this week. “Take it day by day, believe in the process, but also to not let us take a break during this time off we have. Stay engaged with the team.”