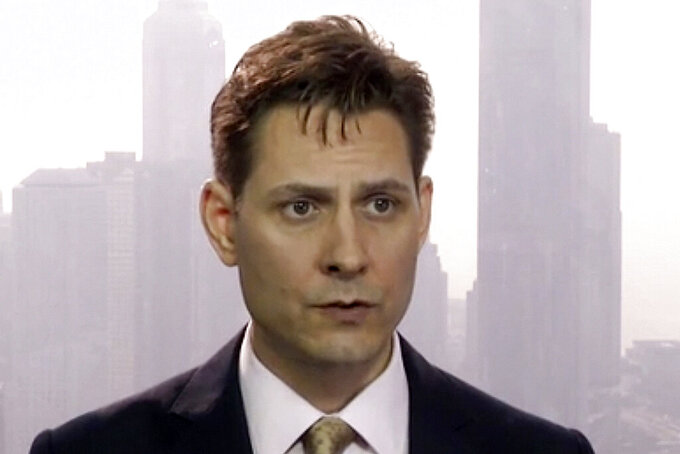 FILE - In this March 28, 2018, file image made from video, Michael Kovrig, an adviser with the International Crisis Group, a Brussels-based non-governmental organization, speaks during an interview in Hong Kong. China told Prime Minister Justin Trudeau on Monday, June 22, 2020 to “stop making irresponsible remarks” after he said Beijing's decision to charge two Canadians with spying was linked to his country's arrest of a Chinese tech executive. (AP Photo, File)

The spying charges are “completely different” from the case of Huawei executive Meng Wanzhou, a foreign ministry spokesman said. Meng was arrested on U.S. charges connected to possible violations of trade sanctions on Iran.

Michael Kovrig and Michael Spavor were detained in what was widely seen as an attempt to Canada after Meng's December 2018 arrest in Vancouver. Charges against them were announced Friday after a Canadian judge ruled Meng's extradition case can proceed to its next stage, moving her closer to being handed over to American authorities.

Trudeau, speaking to reporters in Ottawa, said Chinese authorities “directly linked” the cases of Kovrig and Spavor with Meng. He called on Beijing to end their “arbitrary detention.”

“There is no such thing as arbitrary detention,” said the ministry spokesman, Zhao Lijian.

U.S. Secretary of State Mike Pompeo on Monday called the charges against Kovrig and Spavor “politically motivated and completely groundless."

“The United States stands with Canada in calling on Beijing for the immediate release of the two men and rejects the use of these unjustified detentions to coerce Canada,” Pompeo said in a statement.

Trudeau thanked the U.S. and other allies for speaking out against China.

“It has been obvious from the beginning that this was a political decision made by the Chinese government and we deplore it,” Trudeau said Monday. "This using of arbitrary detentions as a means to advance political gains is totally unacceptable in a world based on rules.”

Meng, the chief financial officer of Huawei Technologies Ltd. and the daughter of its founder, is accused of lying to banks in Hong Kong about Huawei’s dealings with Iran in possible violation of U.S. sanctions.

Meng’s case is a “seriously political incident” and part of U.S. efforts to “suppress Chinese high-tech enterprises and Huawei,” Zhao said. He said Canada “played the role of an accomplice.”

“We strongly urge Canada to correct its mistakes as soon as possible, immediately release Meng Wanzhou and ensure her safe return to home,” said Zhao.

Meng is living in a mansion she owns in Vancouver, where she reportedly is working on a graduate degree. Kovrig and Spavor are being held at an undisclosed location and have been denied access to lawyers or family members.

China has also sentenced two other Canadians to death and suspended imports of Canadian canola.

Zhao said visits by foreign diplomats to prisoners were suspended due to the coronavirus pandemic.