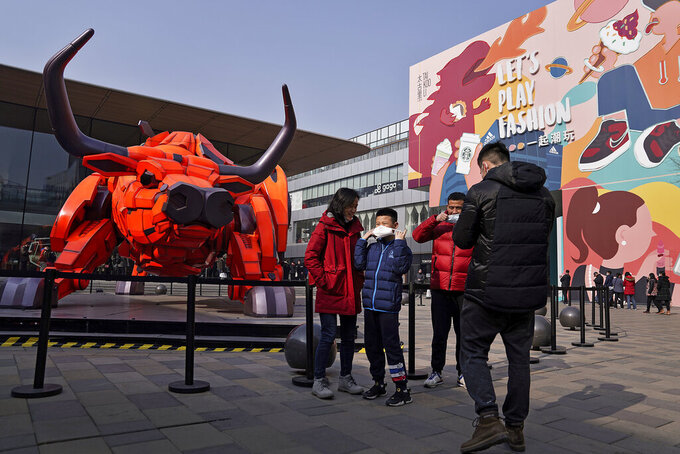 A man and a child put on their face mask to help curb the spread of the coronavirus after taken a souvenir photo near a Year of the Ox statue on display at the capital city's popular shopping mall during the first day of the Lunar New Year in Beijing, Friday, Feb. 12, 2021. Festivities for the holiday, normally East Asia's busiest tourism season, are muted after China, Vietnam, Taiwan and other governments tightened travel curbs and urged the public to avoid big gatherings following renewed virus outbreaks. (AP Photo/Andy Wong)

BEIJING (AP) — Railway journeys in China during the usually frenetic Lunar New Year holiday travel rush are down by almost 70% amid calls for people to stay where they are to avoid a new outbreak of COVID-19.

The China State Railway Group on Saturday reported 52.33 million passenger trips from Jan. 28 to Feb. 11 — a decline of 68.8% from the same period last year.

The travel rush is generally considered the world’s largest annual human migration, when urban residents, migrant workers and students return to their hometowns for family gatherings.

Air and bus travel are also down considerably, but one figure is up: China’s box office receipts smashed the previous one-day record on Friday, the first day of the new lunar Year of the Ox, bringing in more than 1.736 billion yuan ($269 million), ticket agency Maoyan said.

The full economic impact of the restrictions on holiday spending is not yet clear. Buddhist and Daoist temples that usually are packed with worshippers were ordered closed, along with the seasonal outdoor fairs.

Streets in major cities were largely empty but home deliveries of meals and household items remain strong, partly because people were staying home and not visiting friends and family to deliver gifts in person. The official China Daily newspaper said deliveries surged by 223% year-on-year on the eve of the Lunar New Year and the following day, with more than 130 million packages distributed.

While most of the economy has reopened, strict mask wearing, electronic monitoring and periodic lockdowns have helped virtually eliminate domestic coronavirus cases.

Chinese hospitals are currently treating 763 patients, 12 of whom were listed in serious condition, while another 470 people were being monitored in isolation for having tested positive for the virus without displaying symptoms.