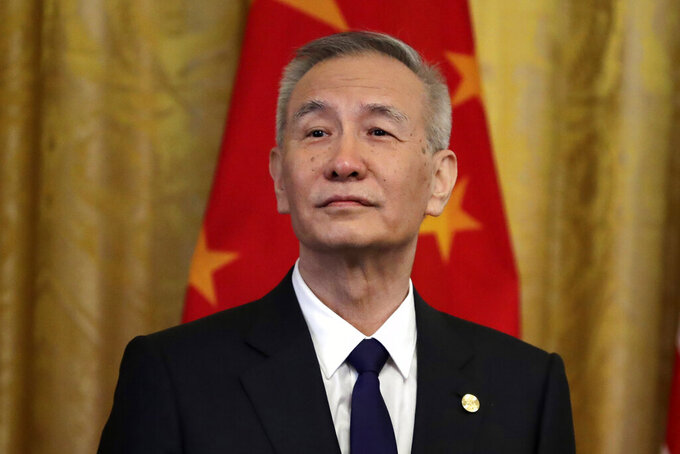 FILE - In this Jan. 15, 2020, file photo, Chinese Vice Premier Liu He listens as former President Donald Trump speaks before signing a trade agreement at the White House in Washington. At a meeting Thursday, June 18, 2021, China pledged to harshly punish anyone responsible for major industrial accidents or outbreaks of violence in coming days as the ruling Communist Party prepares lavish celebrations for its centenary on July 1, 2021. Vice Premier Liu ordered safety checks be carried out to forestall such incidents. (AP Photo/Evan Vucci, File)

BEIJING (AP) — China is pledging to harshly punish anyone responsible for major industrial accidents or outbreaks of violence in coming days as the ruling Communist Party prepares lavish celebrations for its centenary on July 1.

At a meeting Thursday, Vice Premier Liu He ordered safety checks be carried out to forestall such incidents.

“Resolutely contain the frequent occurrence of various types of accidents and create a safe and stable environment for celebrating the centenary of the founding of the party," an official statement released after the meeting said.

The meeting follows the deaths of at least 25 people in a gas explosion Sunday at a market in the central city of Shiyan and of 13 people in a flood in an iron mine in the northern province of Shanxi on June 10. Authorities have detained 13 people in the mine flood while an investigation into the market blast is ongoing.

President Xi Jinping, who is also head of the party, is determined to ensure the anniversary celebrations are not marred by any incidents at a time when China is under fire from the international community over human rights violations in Xinjiang, Tibet and Inner Mongolia, the roll-back of democracy in Hong Kong, military threats against Taiwan, and its aggressive assertions of territorial claims in the South China Sea.

At home, the economy has bounced back from the coronavirus pandemic but has yet to recover its previous vitality, with well-paying jobs for new college graduates scarce and the government forced to inject huge sums into the economy.

A chemical leak killed 78 people at a plant in eastern China in 2019, while a massive 2015 explosion at a chemical warehouse in the port city of Tianjin killed 173 people, most of them firefighters and police officers. The blast was blamed on illegal construction and unsafe storage of volatile materials.

The name in the story summary has been corrected to Liu He.