China reports 141 dead or missing in flooding since June 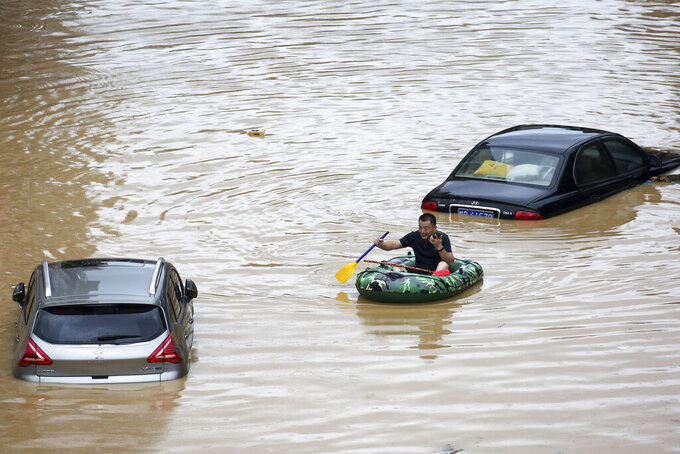 In this photo released by Xinhua News Agency, a man paddles with an inflatable boat past submerged cars during a flood in Rongshui County in southern China's Guangxi Zhuang Autonomous Region, Saturday, July 11, 2020. Vice Minister of Emergency Management Zheng Guoguang told reporters Monday, July 13, 2020 that the Yangtze River and parts of its watershed have seen the second highest rainfall since 1961 over the past six months. (Long Linzhi/Xinhua via AP)

BEIJING (AP) — The Yangtze River region has seen its second highest rainfall in more than a half-century so far this year as deadly flooding strikes much of China.

Around 28,000 homes have been damaged and 141 people have died or are missing in the floods since last month.

Virtually all of mainland China has been affected, excluding vast far western areas such as Tibet and Xinjiang, according to Vice Minister of Emergency Management Zheng Guoguang.

The Yangtze, Asia's longest river, and parts of its watershed have seen the second highest rainfall since 1961 over the past six months, Zheng told reporters.

Damage has been estimated in the hundreds of millions of dollars, adding to pressure on an economy deeply impacted by the coronavirus pandemic, including virus-related shutdowns and the loss of overseas markets.

Hubei province, through which the Yangtze flows and famed for its numerous lakes and rivers, is under particular threat. The province's capital Wuhan was the epicenter of China's virus outbreak, which appears to have largely been contained.

The floodwaters have inundated towns across southern and central China and prompted emergency workers to shore-up embankments and dig channels to release overflow. Flood surges on 433 rivers have exceeded the warning level and 33 of them hit record highs, Zheng said. Apart from the Yangtze, other major rivers systems and lakes have been rising, including the Yellow River in the North, the Zhujiang in the south and Taihu, China's largest freshwater lake just west of Shanghai.

Flooding in some areas last week forced the rescheduling of portions of the crucial four-day national college entrance exams that had already been delayed for a month because of the coronavirus outbreak.

Key tourist destinations in China’s south have sustained flood damage that is compounding financial stress caused by the massive drop-off in numbers of visitors.