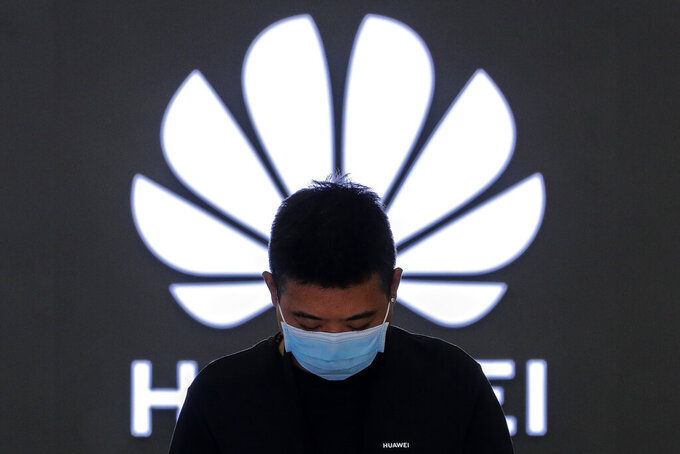 FILE - In this Aug. 31, 2020, file photo, an employee wearing a face mask to help curb the spread of the coronavirus stands inside a Huawei flagship store in Beijing. Chinese tech giant Huawei said Wednesday, March 31, 2021, it eked out a gain in sales and profit last year but growth plunged after its smartphone unit was hammered by U.S. sanctions imposed in a fight with Beijing over technology and security.(AP Photo/Andy Wong, File)

BEIJING (AP) — Chinese tech giant Huawei said Wednesday it eked out higher sales and profit last year but growth plunged after its smartphone unit was hammered by U.S. sanctions imposed in a fight with Beijing over technology and security.

China’s first global tech brand reported sales of phones, network gear and other technology rose 3.8% over 2019 to 891.4 billion yuan ($135.8 billion), a decline from the previous year’s 19.1% growth. That was propelled by a 15.4% gain in China, while sales in other markets shrank.

Huawei Technologies Ltd. is struggling to keep its global markets after then-President Donald Trump in 2019 cut off access to U.S. processor chips and other technology. Huawei was the top-selling smartphone brand in the second quarter of 2020 but fell out of the global top five after losing Google's music and other popular services.

“We think this is a very unfair situation to Huawei. It has damaged us a lot,” chairman Ken Hu said at a news conference at Huawei headquarters in the southern city of Shenzhen.

The results reflect the damage from sanctions and point to a possible future for Huawei that focuses on China and on networks and other products that are less vulnerable to foreign pressure.

Huawei, which denies accusations it might aid Chinese spying, sold its lower-priced Honor smartphone brand in hopes of reviving sales by separating it from the sanctions on the parent company.

Huawei says it has a stockpile of U.S. chips for its high-end smartphones but executives have said those are running out. Trump expanded sanctions by barring global suppliers last year from using U.S. technology to produce chips for Huawei.

Economists and political analysts expect little change under President Joe Biden, who succeeded Trump in January. The founder of Huawei, Ren Zhengfei, said in February he sees little chance that sanctions will be lifted.

Hu didn’t respond directly when asked how Huawei would cope if sanctions remain and when China’s fledgling tech industry might supply the advanced chips it needs. But he said U.S. suppliers have lost $10-20 billion in annual sales to Huawei and expressed hope for unspecified “help from national leaders around the world” to restore interaction with global chip suppliers.

“We hope they can help us to restore this kind of cooperation in the semiconductor industry,” he said.

Hu expressed confidence global sales will rebound once the coronavirus pandemic is brought under control.

“I’m pretty positive about 2021 performance in regions outside China, but I’m not able to give you a definitive forecast," he said.

The clash with Washington prompted the ruling Communist Party to make transforming China into a self-reliant “technology power” this year's top economic priority. The Finance Ministry announced this week chipmakers will be exempt from import taxes on equipment and raw materials through 2030.

Sales growth was the weakest since a one-year contraction in the early 2000s after the tech industry was shaken by the collapse of share prices for internet companies on Wall Street, according to the company.

In a show of technical prowess, the company unveiled a folding smartphone in February with an eight-inch-wide (20-centimeter-wide) screen. But it said the Mate X2 will be sold only in China, possibly reflecting shortages of processor chips to manufacture it.

Research and development spending, already among the highest for any company, rose to 141.9 billion yuan ($21.6 billion), according to Huawei. That was 16% of revenue, up from about 10% in previous years.

Network equipment sales to global phone carriers were flat at 302.6 billion yuan ($46.4 billion) after Washington pressured European and other allies to exclude Huawei as they upgrade to next-generation technology.

The two governments, along with Canada, are fighting over the arrest in Vancouver of a Huawei executive, Meng Wanzhou, who is Ren’s daughter. She is fighting extradition to the United States on charges related to possible violation of U.S. trade sanctions on Iran.

Two former Canadian diplomats were arrested in China and are being prosecuted on spying charges in what is widely seen as an attempt to pressure Prime Minister Justin Trudeau’s government to release Meng.

Huawei says it is owned by the Chinese employees who make up half its workforce of 197,000 in 170 countries. The company began reporting financial results a decade ago in an attempt to defuse Western security concerns.