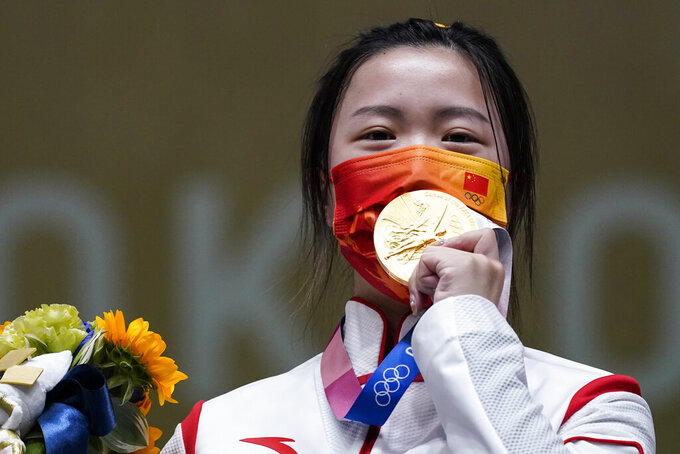 Yang Qian, of China, reacts after winning the gold medal in the women's 10-meter air rifle at the Asaka Shooting Range in the 2020 Summer Olympics, Saturday, July 24, 2021, in Tokyo, Japan. (AP Photo/Alex Brandon)

TOKYO (AP) — Hardly half a day passed before politics, the pandemic and blistering heat impacted events across the Tokyo Olympics.

Yang overtook Anastasiia Galashina of Russia to win the first gold medal of the Tokyo Games in the women's 10-meter air rifle Saturday. Her last shot was her worst of the finals but still rallied her past Galashina with an Olympic-record score of 251.8. Switzerland’s Nina Christen took bronze.

“It’s unbelievable that I can be here,” Yang said through an interpreter. “I was really nervous. The competition was really tight, but I’m so happy that I could win.”

Galashina led Yang by 0.2 points when they fired almost simultaneously on their last shots. The limited crowd at Asaka Shooting Range let out gasps as the scores posted a split second later.

Yang, a 21-year-old who qualified sixth of the eight medal competitors, missed the innermost circle on her final shot, a 9.8 that she figured would cost her gold.

She looked up to see Galashina missed the two center rings. The Russian’s 8.9 meant IOC President Thomas Bach would present Yang the gold medal on a tray — per pandemic protocols — instead of Galashina.

The first event of the Olympic beach volleyball tournament was canceled because a Czech player tested positive for COVID-19. Markéta Sluková, who tested positive earlier this week, and partner Barbora Hermannova were eliminated from the tournament.

Already empty because of a ban on fans, the venue at Shiokaze Park was eerily still when the match was supposed to start at 9 a.m. on Saturday, the only sound coming from the incredibly loud cicadas in the nearby trees.

The Japanese team of Megumi Murakami and Miki Ishii earned the win by default after qualifying for the tournament via the entry reserved for the host country. Officially, the Czechs were marked as “Did Not Start,” and their three round-robin opponents will be awarded victories.

Sluková is one of at least three members of the Czech team who have tested positive since their arrival in Japan, including men’s beach volleyball player Ondřej Perušič. The team has said it’s investigating if the outbreak of COVID-19 is linked to its charter flight to Tokyo.

An Algerian judo athlete will be sent home after he withdrew from the competition to avoid potentially facing an Israeli opponent.

Fethi Nourine and his coach, Amar Benikhlef, told Algerian media they were withdrawing to avoid a possible second-round matchup with Israel’s Tohar Butbul in the men’s 73 kg division on Monday. Nourine was to face Sudan’s Mohamed Abdalrasool in the opening round, with the winner facing Butbul, the fifth seed.

The International Judo Federation’s executive committee has temporarily suspended Nourine and Benikhlef, who are likely to face sanctions beyond the Olympics. The Algerian Olympic committee then withdrew both men’s accreditation and made plans to send them home.

Nourine and Benikhlef attribute their stance to their political support for Palestinians.

Tennis player Daniil Medvedev wants organizers to move matches to the evening after players slogged through their opening matches in heat that reached 91 degrees F (33 degrees C) and a heat index that made it feel like 100 F (38 C).

Medvedev called it “some of the worst” heat he's played in after eliminating Alexander Bublik of Kazakhstan 6-4, 7-6 (8).

“I’m not going to lie. But you have to play,” the Russian said. “That’s the Olympics, you go for the medal. You are not here to cry about the heat.”

French Open finalist Anastasia Pavlyuchenkova grasped for an air tube during a medical timeout and shoved bags of ice up her skirt during a changeover as she routed Sara Errani of Italy 6-0, 6-1.

“You’re just not feeling great,” Pavlyuchenkova said. “So I wasn’t enjoying it at all.”

The charismatic Takato’s success could provide a much-needed jolt of excitement for a nation still feeling profoundly ambivalent about these Olympics and discouraged by the scandals and coronavirus setbacks surrounding them.

The 28-year-old Takato atoned for his disappointing bronze-medal performance in Rio de Janeiro five years ago with a hair-raising run to the Tokyo final at the venerable Nippon Budokan arena, the site of judo’s introduction to the Olympics in 1964.

The youngest competitor at the Tokyo Games has been eliminated, and so has an Olympic great.

Zaza told Olympics.com that she was pleased with her performance and learned from the loss — and she’s hoping for another shot at the next Olympics, in Paris.

Considered by many the greatest of all time, the 2012 and ’16 all-around gold medalist was midway through his set when he peeled off while doing a complicated connection. He picked himself up and finished his routine, drilling his dismount.

His score of 13.866 placed him outside of the top eight, meaning he will not make the finals.