Chinese tourists to take 18 million rail trips on May Day 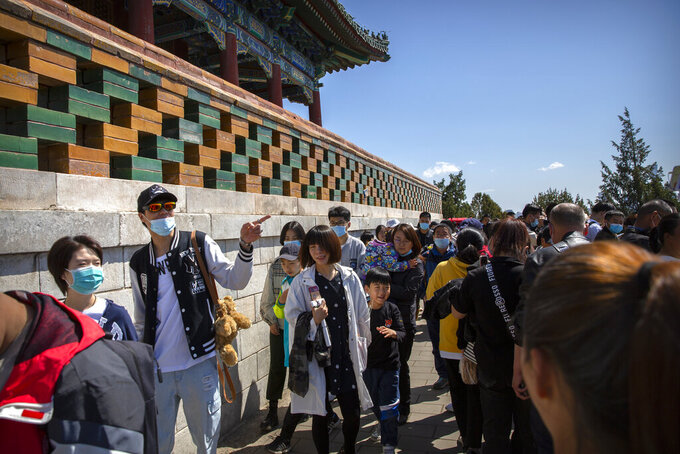 Visitors wearing face masks gather at a viewing area overlooking the Forbidden City at a public park in Beijing, Saturday, May 1, 2021. Chinese tourists are expected to make a total of 18.3 million railway passenger trips on the first day of the country's five-day holiday for international labor day, according to an estimate by the state railway group, as tourists rush to travel domestically after the coronavirus has been brought under control in China.(AP Photo/Mark Schiefelbein)

BEIJING (AP) — Chinese tourists are expected to make a total of 18.3 million railway passenger trips on the first day of the country's five-day holiday for international labor day, according to an estimate by the state railway group. Tourists are rushing to travel domestically after the coronavirus has been brought under control in China.

The May Day holiday, which runs from May 1 to 5, is the first long break for Chinese tourists since the beginning of the year, when a domestic outbreak of the coronavirus before the Lunar New Year holidays in February cancelled travel plans for many after the government advised people to refrain from traveling.

Before the pandemic, the Labor Day holiday often saw Chinese tourists travelling internationally to countries in Europe and Southeast Asia. But border closures and travel restrictions mean tourists are traveling domestically this year.

Additionally, some 60 million vehicles are expected to hit the roads during the Labor Day holiday, China’s Transport Ministry said earlier this week. In total, tourists are estimated to make 265 million trips.

“I feel like this is the first time ever that restrictions are really eased after the pandemic,” said Sun Dandan, a real estate professional who lives in Xinjiang and was visiting Beijing for the first time.

“People’s enthusiasm for traveling is strengthening again, and the economy is improving too.”

On Saturday morning, Beijing South Railway Station, one of the busiest stations in the Chinese capital, was packed with passengers leaving for vacation. Tickets for the Beijing-Shanghai high-speed railway, one of the main routes that the railway station operates, were all sold out on the first day of the Labor Day holiday, a digital screen at the railway station showed.

Large groups of tourists were also enjoying themselves at the various attractions in Beijing, including at the city’s famed Qianmen Street, known for its local food and buildings with traditional-style architecture.

“It’s very bustling here. The pandemic in foreign countries is very severe, but here in China we are not affected at all,” said Guo Jieping, who was visiting Beijing from Shanxi Province.

She added that she had already been vaccinated and was therefore not worried about traveling. Mass vaccinations in China, where over 240 million doses of the vaccine have been administered, have also boosted confidence about travel.

China in recent weeks reported almost no cases of locally-transmitted infections, in stark contrast with the rest of the world where many major countries are still grappling with the pandemic.

Over 70% of tourists are choosing to travel between provinces within China, according to data from from China’s largest online travel platform Trip.com.