Chock and Bates top Hubbell and Donohue for US title 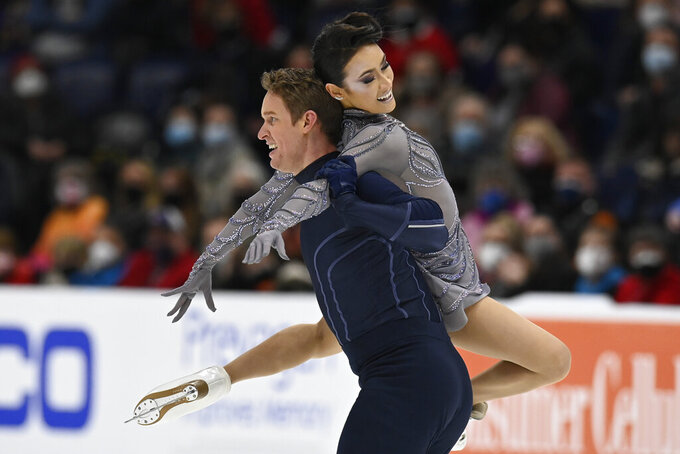 NASHVILLE, Tenn. (AP) — Madison Chock and Evan Bates knew from the crowd response that Madison Hubbell and Zachary Donohue, their close friends and longtime rivals, had laid down a near-flawless performance at the U.S. Figure Skating Championships.

It took a mesmerizing, out-of-this-world show of their own to answer them.

With Chock portraying an alien in haute couture, and real-life partner Bates an astronaut, the couple danced their way through a medley by French electronic duo Daft Punk to earn a career-best 227.37 points — and a standing ovation — and win their third national championship on Saturday night.

“It was frankly a challenging set of circumstances skating last, knowing Zach and Maddie had skated well,” Bates said. “We really relied on our training. We've been working hard to be as prepared as we can be for this time in our careers, knowing it's incredibly important. It showed up tonight.”

Indeed, Chock and Bates did just enough to hold off Hubbell and Donohue, the defending champions, who had a career-best score of 225.59 in their final nationals appearance. When it came to its heartfelt a conclusion, the two dropped to the frozen surface inside the Bridgestone Arena in an embrace so warm it could have easily melted the ice.

“We wanted to end our career here at the U.S. championships with a performance that felt fully present,” Hubbell said, “and we're both very satisfied with how we skated this evening. We knew we were content with what we put out there.”

Chock and Bates have traded the national title with Hubbell and Donohue for years, and now they will take their rivalry to the Beijing Olympics. Both are considered medals contenders there. It will be the third straight trip for Chock and Bates, and a record fourth overall for Bates, who went to the 2010 Winter Games with former partner Emily Samuelson.

“I think the perspective on everything has changed a lot over the last four years. The last two years especially, the way the world has been turned upside down," Bates said. “It's just a constant reminder to be grateful for what we have.”

Katilin Hawayak and Jean-Luc Baker put together a sizzling performance of their own in the free dance, leaping over Caroline Green and Michael Parsons into third place and likely giving them the third slot on the U.S. team for Beijing.

“It has not been a straight journey to this point for us whatsoever ever over the last four years,” Hawayak said. “I think both Jean-Luc and I have leaned into each other more than ever, and we've found such a deep trust within one another through the challenges and obstacles we've overcome.”

Earlier in the night, Ashley Cain-Gribble and Timothy LeDuc laid down a dazzling pairs program that Jessica Calalang and Brian Johnson were unable to match to earn the national title and a likely spot in next month's Olympics.

The other spot could go to Alexa Knierim and Brandon Frazier, who were forced to withdraw after he tested positive for COVID-19 before nationals even began. Knierim and Frazier were the heavy favorites coming into the week.

“I don’t have a lot of words,” said Cain-Gribble, who was hospitalized with COVID-19 last summer. “We’ve visualized this moment so many times and to have done a performance like that, and the whole week the way it went — it’s just surreal.”

Cain-Gribble and LeDuc led Calalang and Johnson by two points after their short program, and the 2019 champions nailed every element from an opening triple twist to an incredible finishing death spiral to finish with 225.23 points.

That put them well ahead of Calalang and Johnson, who couldn't overcome three early mistakes in their free skate to finish second with 209.87 points — likely dashing their Olympic dream. Audrey Lu and Misha Mitrofanov were third.

“The way it was explained to us is a lot more emphasis is on nationals, but they still take into account the whole season,” Johnson said. "You can have an amazing season, win two Grand Prix's and medal at the Grand Prix Final, then come to nationals and get third, a fluke or something. I think that should weigh into it. Good system.”

As usual this week, there were more positive COVID-19 tests Saturday: men's competitor William Hubbart and ice dancers Raffaella Koncius and Alexey Shchepetov had to withdraw. They joined two-time U.S. champ Alysa Liu, Amber Glenn and defending pairs champs Knierim and Frazier in sitting out at least a portion of the competition.

Like Knierim and Frazier, Liu petitioned U.S. Figure Skating for a spot in Beijing. She was chosen by a committee Saturday along with newly minted U.S. champ Mariah Bell and runner-up Karen Chen, who will appear in her second Olympics.

“I've basically been training forever for this moment,” said Liu, adding that she felt fine health-wise, “and I'm really happy (with) the decisions I've made, because apparently they were all pretty good ones. I'm here right now.”

Chen began pursuit of his sixth consecutive national title by setting a record of 115.39 points during his quad-tacular short program. Zhou followed with a personal-best 112.78 points that included a quad lutz-triple toe loop. The free skate is Sunday.

“This is up there,” Chen said, when asked how his program and the other men's routines stacked up historically. “There's been amazing performances done over the history of skating. I can't say it's definitive, but certainly during my career it's one of the standout few.”