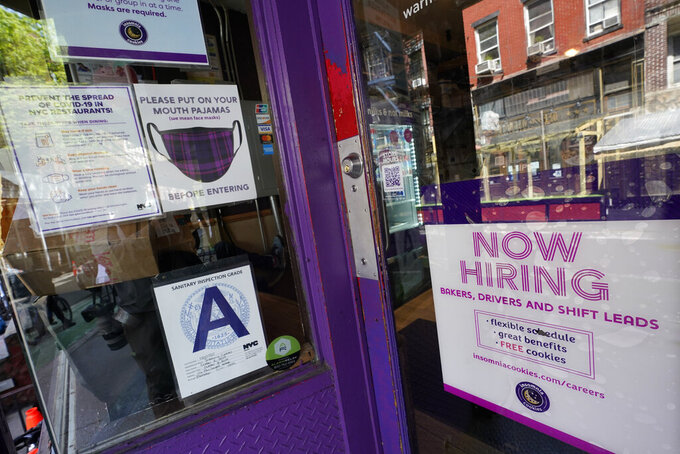 FILE - In this May 4, 2021 file photo, a signs announcing they are hiring hangs in the window of a restaurant in the Greenwich Village neighborhood of Manhattan in New York. The economic recovery’s seemingly open road ahead could get a little bumpy from here. The employment market, a key factor in a full recovery from the pandemic, has been stubbornly lagging behind. (AP Photo/Mary Altaffer, File)

April's weak jobs report is a sign that while the U.S. economy continues its post-pandemic recovery, the road ahead will be bumpy.

Only 266,000 jobs were created last month, shocking Wall Street and leaving the U.S. still about 8.2 million jobs short of the where the country stood before the coronavirus began to spread last year, killing just over 579,000 Americans and shuttering wide swathes of the economy.

The shortfall raises concerns about how quickly the U.S. economy can return to normal. Consumer spending, which has been steadily recovering and accounts for 70% of economic activity, can only push the economy so far. Fuller employment, and more people getting paid, will be needed to sustain an economic rebound.

“This report is a humbling experience for economists and strategists given the wide miss versus expectations,” said Katie Nixon, chief investment officer at Northern Trust Wealth Management.

At April’s pace for job growth, it could take until the end of 2023 for employment to reach levels seen just before the pandemic hit. But, growth has been choppy and far more jobs were added in March. At that pace, employment would fully recover to pre-pandemic levels by the middle of 2022.

Consumers are growing more confident and opening up their wallets while manufacturers ramp up and travel demand rebounds. But with the employment market stubbornly lagging behind, it's been a reality check for an exuberant market projecting a steady and fast recovery this year.

“We anticipate the strong economic recovery to continue,” Nixon said. “It does, however, highlight our shared belief in the Fed’s view that there is a 'ways to go” before we get back to pre-COVID-19 levels of employment.”

The latest employment report also threw the market a curve, in that it painted a picture of a recovery moving so fast that the supply of workers has not yet caught up with demand. Many workers are still reluctant to look for work because of the lingering threat from COVID-19, while unemployment benefits still remain enhanced. Analysts have also pointed out supply chains for lumber and other commodities have slowed production and paused the need for hiring in some sectors.

Restaurants, hotels and entertainment venues notched gains last month as people feel more comfortable going out to eat and travel. Hiring for jobs more related to the e-commerce that skyrocketed during height of the pandemic, like warehousing, fell.

The lagging jobs market is contrasted by strong growth in consumer confidence and spending. Consumer confidence rose sharply in April, hitting the highest level since the pandemic began. April's retail sales report from the Commerce Department is expected on Friday, but March's report showed that consumers flush with stimulus cash drove the biggest increase since May of 2020. Widening distribution of vaccines and businesses reopening have helped bolster spending.

In March, the Commerce Department revised its forecast for GDP growth to around 6% for the year, which would be the strongest performance since a 7.2% GDP gain in 1984 when the economy was coming out of a deep recession. It would also put the total GDP above its 2019 levels.

Despite choppiness in the jobs market, investors should expect the recovery to continue pushing forward, according to some analysts. Along with consumer confidence and spending, companies have been reporting surprisingly strong earnings and revenue improvements through the first three months of the year and the rest of the year is forecast to produce more of the same.

“We’re continuing to see the economy recover and what I like is there’s this broad recovery across various sectors and industries,” said Andrea Bevis, senior vice president at UBS Private Wealth Management.