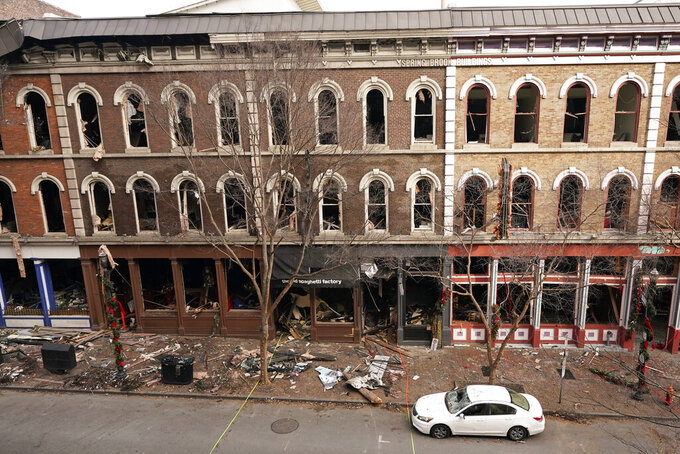 Debris remains on the sidewalks in front of buildings damaged in a Christmas Day explosion Tuesday, Dec. 29, 2020, in Nashville, Tenn. Officials have named 63-year-old Anthony Quinn Warner as the man behind the bombing in which he was killed, but the motive has remained elusive. (AP Photo/Mark Humphrey)

NASHVILLE, Tenn. (AP) — When Sandy and Geff Lee finally saw a photo of the building that was home to their Nashville boutique on the day after the Christmas morning bombing, a quiet came over the room.

The rubble was overwhelming. Debris shadowed familiar details. Geff Lee pulled up a map to verify they were looking in the right place.

“That moment? It was silence. It was an eye-opener,” Sandy Lee said, owner of Ensemble. “It was blown up.”

The Christmas Day explosion has sparked shock across the country after a bomb detonated in the heart of Nashville's historic downtown and killed the bomber, injured three other people and damaged dozens of buildings.

Yet for those who call Music City home, the bombing feels like a cruel capstone to an already dark year.

Then the COVID-19 pandemic arrived, shuttering businesses as people stayed home and the virus spread rapidly. Some people who lost their homes in the tornado saw their jobs disappear.

Things have steadily worsened over the course of the year. The post-Thanksgiving resurgence left Tennessee with among the highest number of cases per capita as state leaders remained hesitant to impose statewide mandatory restrictions. And while the city is known as a health care hub, Nashville's hospitals have strained to keep up with the stream of COVID-19 patients that have been rushed from all corners of the state.

Those weren't the only setbacks. Some downtown businesses experienced property damage in late May during a peaceful protest that turned violent in response to racial injustice and police brutality.

Many structures in the tornado's path remain broken and tangled to this day, a reminder of a bad wound slow to heal.

State and local officials shake their heads in dismay that a city that had been flying high on an economic boom for years managed to pack in so many tragedies in just 12 months.

“We’re getting through the tornado, then COVID. And then this. Just when you start to see the light, it’s taken away in two seconds,” said Pete Gibson, whose tattoo parlor was just across the street from the site of the Christmas Day explosion.

A year earlier, Nashville hosted the coveted NFL draft and proudly announced it would once again host a presidential debate in the 2020 election. It boomed as a destination spot for bachelorette parties.

Businesses along Second Avenue, a narrow-tree lined street where the explosion took place, had found a thriving location with a ready-made tourist market in the Civil War-era buildings over the years. The explosion took place just off Lower Broadway, the flashy business thoroughfare known for its bright lights and honky-tonks, on a slightly quieter street that beckoned those looking for refuge from the noise and bustle of the main drag.

More than 40 structures were damaged by the blast. Because of the active investigation, which has drawn hundreds of federal officials to sweep though the broken glass, bricks and other debris left by the blast, business owners have not been able to return — not even to survey the damage.

Republican Gov. Bill Lee has said he's working with the White House to bring federal aid for the city. The mayor has promised to rebuild. But those who made their livelihood in the area fear another precious piece of their city may be lost as they again watch a round of fundraising efforts pop up to help support employees and business owners limp along.

“We've always taken such pride to be part of this community and to see those buildings that have survived the Civil War are going to be most likely torn down is really, really sad,” said Carla Rosenthal, the owner of The Melting Pot and Rodizio Grill, both businesses destroyed in the blast that employs roughly 120 staffers combined.

Nearly a quarter of those employees had already applied for unemployment by end of Christmas.

“We've always felt like we were part of what has brought Nashville to become the ‘It City’ as it is," said Rosenthal, who has owned The Melting Pot for more than 25 years and Rodizio Grill for eight. “We helped build this city.”

Tim Walker, the executive director of the Metro Historical Commission, has been anxious to survey the damage. He called the corridor an important symbol of the city’s history and development, a unique facet of Nashville's resurgent identity.

Walker noted that some of the historic buildings had been transformed into apartments and condominiums, boutique hotels and Airbnbs.

“We’re very concerned about the damage. I know a lot of the public is,” said Walker, adding that he hopes just some of the buildings are not structurally impaired.

When the tornado hit in March, the community came together — like it is again in the aftermath of the explosion, Stephanie Coleman, the chief growth officer for the Nashville Area Chamber of Commerce said.

Ten years ago, the city suffered a devastating flood, and it’s been on the rebound ever since, Coleman said.

“We were still on that track, you know, starting in the beginning of 2020. Really everything was looking up, looking bright, for Nashville and our future,” she said.

“This is a situation that we know we will get through,” Coleman said. “The fact that we didn’t lose lives, it gives us the hope. ... I think we’re just thankful that it wasn’t a different story.”