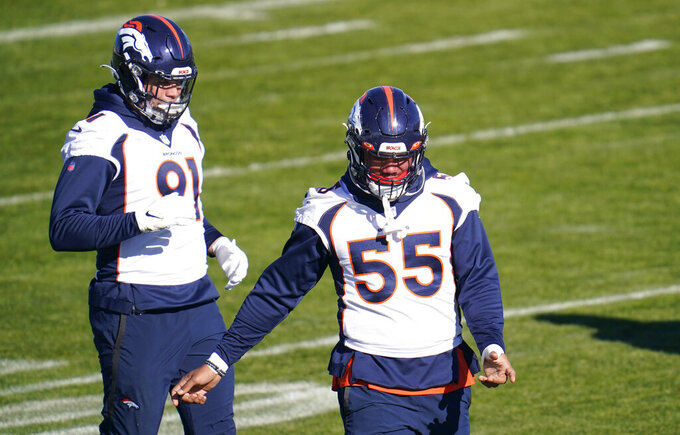 ENGLEWOOD, Colo. (AP) — The most impressive part of Bradley Chubb’s comeback from a torn ACL that culminated in his tearful reaction to a Pro Bowl berth this week is that he did it with Von Miller on the sideline.

“I just think he had a great season. His sack numbers and hurries and hits, those things were ranked really high as a total,” Broncos coach Vic Fangio said Wednesday. “Obviously, the more pass rushers you have in there, it helps everybody. We definitely missed Von, Bradley missed Von.”

Despite playing alongside a bevy of backups and dealing with constant double teams, Chubb ranks fourth in the league with 7½ sacks and 60 quarterback knockdowns and hurries.

“It’s just a testament to the type of player he is, the way he works, the way he goes about his business,” safety Kareem Jackson said. “He’s a great leader for our defense and just in Year 3 he’s a huge piece to this puzzle here.

“For me, it’s no shock that he made the Pro Bowl and is putting up the numbers that he is on a weekly basis.”

Nor is it surprising to Fangio.

“I just think he played great in spite of all the obstacles he had to overcome,” Fangio said.

Chief among them was Chubb’s balky left knee that he injured last year, ending his 2019 season after just four games. It was still bothering him during training camp this summer and even into the season, which began with a sackless September.

Miller’s absence was another big complication in Chubb’s comeback.

Miller appeared primed for a big season before a freak ankle injury six days before the opener sent the franchise’s all-time sacks leader into surgery and months of rehab. Miller had hoped to make a quicker-than-expected return this month, but Fangio said Wednesday he didn’t believe Miller would be medically cleared to practice or play this season.

The only time Miller and Chubb played a full year together was Chubb’s first season in 2018 when the duo teamed for 26½ sacks, including Chubb’s dozen, a franchise rookie record.

Chubb said that even though Miller didn’t suit up this season, he had a huge impact on his comeback and first Pro Bowl berth.

“I remember right before we played the Jets (on Oct. 1), I talked to Von and we had a conversation about what I really wanted out of the season,” Chubb recounted. “He just asked me what type of leader I wanted to be and what type of player I wanted to be. When I had that conversation with him, I started to get out of my own head and I started to realize, ‘Yeah, I can really be in this league and I’m in this league for a reason.’

“I went out there, gathered my teammates around me and we did it,” Chubb added, growing emotional. “I got huge accolade, but it doesn’t stop there. I want to keep going. This one is special. That’s why I keep getting choked up. It’s so special, man. I’m sorry.”

Chubb collected 2½ sacks against the Jets, including a takedown of Sam Darnold on fourth-and-3 from the 50 with 2:00 left and the Broncos clinging to a 30-28 lead.

His comeback was officially under way, and it hit him this week when he was voted to his first Pro Bowl.

“It’s huge being able to get the Pro Bowl nod after all the things I went through last year with the knee, the rehab, doubting myself and doubting my abilities,” Chubb said.

And Chubb’s looking forward to teaming with Miller for his own comeback next year.

“It would be crazy with the player he is, the energy he brings and the amount of attention from the offense he requires,” Chubb said. “At the level I’m playing and the level the guys on the inside is playing, it would be hard to double-team one guy because you’ll have to pick your poison. You’ll have two guys on the edge that can do things and the guys up the middle that can do things. When he gets back, it’s going to be crazy.”

That is provided the Broncos pick up the club option on Miller’s final season of his six-year, $114 million deal that he signed in the aftermath of his Super Bowl 50 MVP performance. Miller made his eighth Pro Bowl last year despite Chubb’s absence for the final 12 games. If he is back in Denver in 2021, he’ll have a Pro Bowl pass-rushing partner to play alongside.

One who isn’t satisfied, either.

“Every player wants more out of themselves each and every year, and this year just wasn’t all of me,” Chubb said. “I still had a great year and did a lot of great things, but it wasn’t everything I wanted to be. I’m working to keep improving and keep moving forward.”