Cities helping renters get right to lawyers in housing court 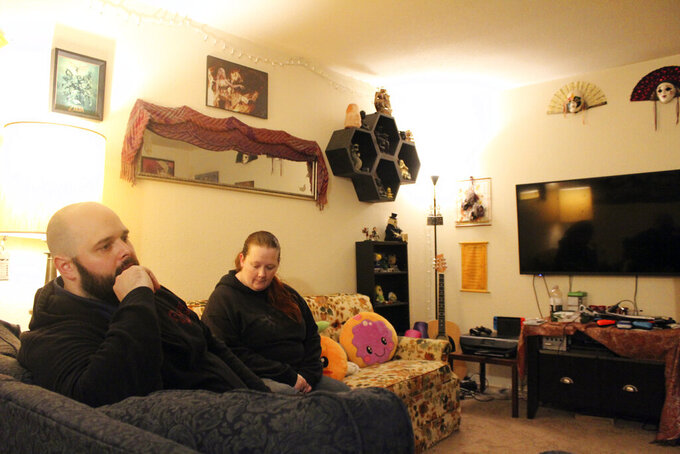 FILE - In this Dec. 11, 2020, file photo, Taylor Wood and her boyfriend, Ryan Bowser, talk about their financial situation in Corvallis, Ore. The family is unsure where they will go if an eviction moratorium is not extended and they are kicked out of their home. As the economic effects of the coronavirus pandemic stretch into 2021, millions of U.S. renters are bracing for the possibility of having to show up in housing court to avoid getting evicted. But unlike their landlords, only a small fraction of them will do so flanked by an attorney. (AP Photo/Sara Cline, File)

WASHINGTON (AP) — As the economic effects of the coronavirus pandemic stretch into 2021, millions of U.S. renters are bracing for the possibility of having to show up in housing court to avoid getting evicted. But unlike their landlords, only a small fraction of them will do so flanked by an attorney.

Fewer than 10 cities and counties nationwide guarantee tenants the right to a lawyer in housing-related disputes, and for people struggling to make ends meet, an attorney is beyond their means, leaving many to skip their court hearings or walk in knowing they have little chance. Unlike criminal cases, an attorney won't be assigned if someone can't afford one. Legal aid organizations and pro bono lawyers represent many renters every year, but the need outpaces what they can handle.

While housing advocates have primarily pushed for rent relief from the government, experts also expect more cities to join the movement to give tenants the right to an attorney.

“The push for right to counsel preceded the pandemic, but it’s particularly acute and particularly urgent in light of the pandemic, given just the overall precarity that renters are facing,” said Gretchen Purser, an associate professor of sociology at Syracuse University who specializes in housing, homelessness and urban poverty.

She said legal representation “is going to be one of the most important things that groups around the country can be pushing for.”

Many people owe months of back rent, having lost their jobs or faced mounting medical bills during the health crisis. By January, renters will owe as much as $34 billion, according to estimates by the global investment bank and advisory firm Stout. An estimated 23 million people are at risk of getting evicted.

The federal COVID-19 relief package includes $25 billion for rental assistance and an extension of an eviction moratorium through January.

The moratorium is what Zachary Kettering thought would protect him when he lost two jobs during the pandemic, fell behind on rent and received a notice in October to vacate his one-bedroom apartment in the Dallas suburb of McKinney.

But he fell victim to a caveat that housing attorneys have warned about: The order from the Centers for Disease Control and Prevention is not a blanket moratorium; tenants must sign a declaration and give a copy to their landlord. By early December, Kettering, a disabled veteran, owed $6,900 in rent and a constable knocked on his door with an eviction notice.

A friend loaned him the money to cover his debt, and he agreed to sign a document from his landlord saying he won’t renew his lease in February in exchange for dropping the case.

“I just kind of acquiesce to whatever they wanted,” said Kettering, 33, who is now raising money online. “It’s like you’re playing a game, and one of the people involved doesn’t know the rules of the game. And that game is a very high stakes, to the point where, like, you will be homeless if you don’t play the game.”

In Baltimore, only 1% of tenants have legal representation in eviction cases, compared with 96% of landlords. But this month, Maryland’s largest city became the latest U.S. jurisdiction to grant renters a right to counsel in those cases. A Stout report estimated that 92% of tenants represented by lawyers in Baltimore would avoid having to leave their homes.

The new ordinance requires the city’s Department of Housing and Community Development to hire nonprofit legal organizations and calls for funding to help spread the word and educate tenants. It gives the city four years to fully implement the requirements.

Attorney Matthew Hill with the Public Justice Center, which advocated for the new ordinance, said Baltimore could draw from general funds and federal money to cover the program's costs. He said a measure proposing a right to counsel also will be introduced in the Maryland Legislature, potentially making state funds available for Baltimore’s effort.

“This is really supposed to level the playing field and really provide tenants access, because eviction court often is just about evictions, but tenants have a lot of defenses,” Hill said, including whether the place is livable and if landlords are licensed. “So, we want to try and change eviction court into housing court and make sure we enforce tenants’ rights to safe, stable, healthy housing.”

The Stout report estimated that an investment of $5.7 million a year to get legal representation for Baltimore renters would result in $35.6 million in savings to the city and state on homeless shelters, Medicaid spending, school funding and foster care costs.

In 2017, New York became the first U.S. city to guarantee the right to an attorney in housing court. Between July 1, 2019, and June 30, 86% of tenants represented by lawyers were able to stay in their homes, according to a city report released this fall.

Other cities with similar laws include San Francisco, Philadelphia and Newark, New Jersey.

Before the pandemic, about 300,000 evictions were filed in the U.S. in an average month, according to the Eviction Lab at Princeton University. A patchwork of local and state guidelines combined with the federal moratorium have provided some protections for people unable to pay rent. But in some places, including cities in South Carolina, Ohio, Florida and Virginia, renters are losing their homes.

Pablo Estupiñan, interim co-coordinator of Right to Counsel NYC Coalition, said eviction filings dropped in New York since its right-to-counsel ordinance took effect three years ago. But he said landlords’ attorneys have increased pressure on tenants and sometimes people choose to leave because they may not know their rights.

“As a result of right to counsel, we saw landlords changing their tactics, and we definitely heard from community members that landlord attorneys were threatening them, saying, ‘If you get an attorney to represent you, then I will fight your case harder and not give you a fair settlement,’" Estupiñan said.