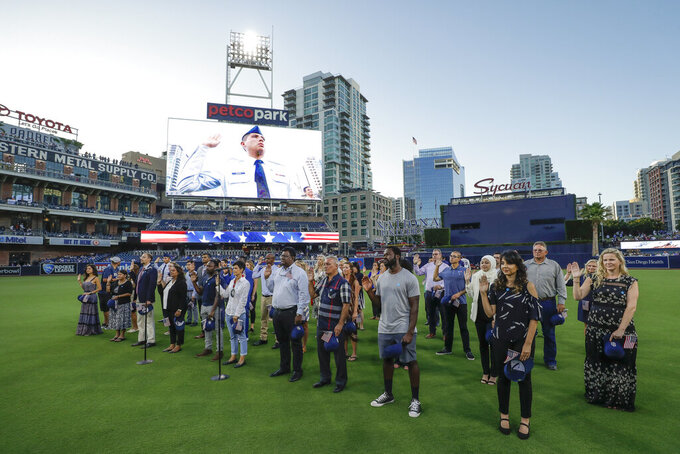 FILE - In this Monday, Aug. 26, 2019, file photo, people raise their hands as they take the oath of allegiance on their way to becoming new United States citizens before a baseball game in San Diego. Less than a year after being on the verge of furloughing about 70% of employees to plug a funding shortfall, the federal agency that grants citizenship, green cards and temporary visas wants to improve service without a detailed plan to pay for it, including waivers for those who can't afford to pay fees, according to a proposal obtained by The Associated Press. (AP Photo/Gregory Bull,File)

SAN DIEGO (AP) — Less than a year after being on the verge of furloughing about 70% of employees to plug a funding shortfall, the U.S. agency that grants citizenship wants to improve service without a detailed plan to pay for it, including waivers for those who can’t afford fees, according to a proposal obtained by The Associated Press.

The Homeland Security Department sent its 14-page plan to enhance procedures for becoming a naturalized citizen to the White House for approval on April 21. It involves U.S. Citizenship and Immigration Services, which is part of Homeland Security and operates entirely on fees.

The plan describes changes that reflect “a realistic assessment of our aspirations and limitations,” including more video instead of in-person applicant interviews, authorizing employees to administer citizenship oaths versus relying on federal judges, and promoting online filing to reduce processing times.

Homeland Security says it can be done without the approval of Congress, where consensus on immigration has proven elusive.

Taken together, the changes mark a complete break from the Trump administration, when the agency focused on combatting fraud and adjusted to shrinking immigration benefits.

The plan also seeks to give potential U.S. citizens the benefit of the doubt. For instance, it specifies that an immigrant who mistakenly registers to vote in U.S. elections before becoming a citizen won’t be punished. Doing so now can lead to deportation or criminal charges, likely ending a person’s chance for citizenship.

The agency will improve the citizenship process to “encourage full participation in our civic life and democracy” and to deliver services effectively and efficiently, according to the document.

It doesn’t provide cost estimates for the proposed changes, though there are options on the table and some measures appear designed to save money and achieve efficiencies. It also acknowledges success depends on long-term financial stability, which includes asking Congress for money.

Under the plan, the agency would continue subsidizing the costs of becoming a citizen to make sure the process is available to as many people as possible. The administration “recognizes that the cost of fees can be a barrier” so "other fee-paying applicants and petitioners will continue to subsidize this policy decision to ensure full cost recovery,” the document reads.

Asked about the status of the proposal, U.S. Citizenship and Immigration Services said it's reviewing policies and practices.

“Under the Biden Administration, the agency has made considerable strides in reallocating our resources and priorities to fulfill this mission and address challenges like the ones caused by the COVID-19 pandemic," spokesman Joe Sowers said in a statement Tuesday. "Ultimately, USCIS is committed to administering our nation’s legal immigration system in a way that empowers immigrants to pursue citizenship and the privileges that accompany it.”

Immigration attorneys called the proposed changes a welcomed shift after the Trump administration.

Sharvari Dalal-Dheini, director of government relations for the American Immigration Attorneys Association, said expanding video interviews would be more efficient and convenient for people far from immigration offices, some of which continue to operate at reduced capacity because of the pandemic.

“They have a huge backlog they need to work out of,” she said. “Having those creative solutions, will help them dig out of that backlog.”

Danielle Spooner, head of the union representing agency workers, said video would benefit employees who've been working from home, but administering the oath, a once-in-a-lifetime experience, should be left to judges.

Questions about how the agency would fund the changes made her uneasy, saying employee morale remains low since last summer's near financial catastrophe.

That's when the agency threatened more than 13,000 furloughs to tackle a projected $1.26 billion shortfall. But a few tense months later, it said it didn't need the money after all and would end the year with a surplus. Agency leaders said application fees rebounded more than expected as offices reopened from coronavirus shutdowns and contracts were reviewed for cost savings.

The budget whiplash raised doubts about how the agency's finances deteriorated so rapidly then suddenly recovered. Ur Jaddou, who was nominated by President Joe Biden in April to lead the agency and has a Wednesday hearing before the Senate Judiciary Committee, was among those with questions.

Jaddou, who served as the agency's chief counsel under President Barack Obama, said in October that the agency needed a financial audit. She questioned some Trump administration changes, including justification for a major expansion of an anti-fraud unit, since abandoned by Biden.

“It really is a bunch of bureaucratic red tape,” she said when discussing agency financial woes.

Fees were set to increase by an average of 20% last October but a federal judge blocked them. The wait to process a citizenship application grew to more than a year by the end of Trump's presidency from less than eight months four years earlier.

Emilio Gonzalez, a former agency director who oversaw massive fee hikes under the second Bush administration, said the agency should avoid going to lawmakers for funding.

“By having your own budget, you can be very nimble,” he said. “Losing your budget leaves you at the whim of Congress and all of a sudden immigration gets politicized.”

One potential avenue for boosting revenue is expanding the use of so-called “premium processing.” For a hefty fee, it allows limited applicants a 15-day turnaround on some paperwork. Under emergency legislation in October, the agency raised it from $1,440 to $2,500 and allowed revenues to be used for operating expenses. USCIS appears on board, allowing the expedited option in February to some Australian nationals.

Broadening it to more eligible forms could generate up to $626 million annually, according to an analysis co-authored by Doug Rand, a former Obama administration official who founded an organization that helps people with immigration.

“When USCIS is plagued with problems and not delivering the services it is supposed to in a reasonable time, that’s not just bad news for immigrants, it is bad news for U.S. citizens navigating the system,” Rand said.