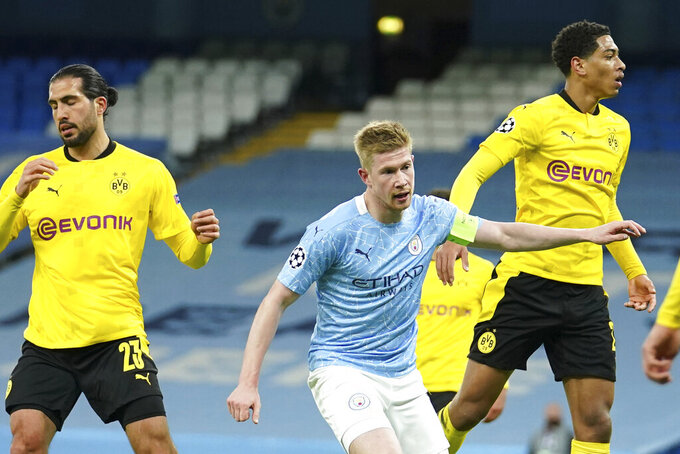 MANCHESTER, England (AP) — Manchester City now has the Premier League’s largest-ever wage bill, and it is set to keep on growing.

Midfielder Kevin De Bruyne secured improved terms on Wednesday with a two-year extension that contracts him to City until 2025.

The deal was announced as the club's annual report showed employee costs rose 11% in the last financial year to 351 million pounds ($485 million). City's payroll costs now eclipse those across Manchester at United, which dropped from to 284 million pounds in the same period covering the pandemic-disrupted 2019-20 season.

And the footnotes of City's finance document disclose that this season's ongoing pursuit of a quadruple, while illustrious for the club, could come with a large price.

City said that additional transfer payments, signing-on fees and loyalty bonuses will be due to players and clubs of up to 158.2 million pounds “upon the achievement of certain conditions.”

Pep Guardiola's side remains on course to produce its most successful season since the influx of cash from Abu Dhabi owner Sheikh Mansour, with his takeover in 2008 transforming City into one of England's most successful clubs.

City leads the standings by 14 points as it closes in on a third Premier League title in four seasons. This month there is a semifinal against Chelsea in the FA Cup and a League Cup final against Tottenham for the holders.

The one major prize to elude City is the Champions League and De Bruyne scored one of the goals that secured a 2-1 victory over Borussia Dortmund in the first leg of their quarterfinal on Tuesday. A cross from the Professional Footballers’ Association's 2020 player of the year also started the move for Phil Foden to score the winner at the Etihad Stadium.

Now De Bruyne, who has won seven trophies since joining City in 2015, is reported to be earning over 300,000 pounds a week.

“This football club is geared for success," the Belgium international said. "It offers me everything I need to maximise my performance, so signing this contract was a straightforward decision. I am playing the best football of my career and I honestly feel there is more to come.

“Pep and I see football in the same way. Having that relationship with a manager is so important to me because our objectives are totally aligned, and we want the same things."

De Bruyne will be hoping there are finally fans allowed back into the stadium to see him lift the Premier League trophy in May — as is planned. The return of spectators will help to stem the flow of losses that reached 126 million pounds in 2019-20 after making a profit of 10 million pounds the previous year, as revenue during the pandemic dropped 11% to 478 million pounds.