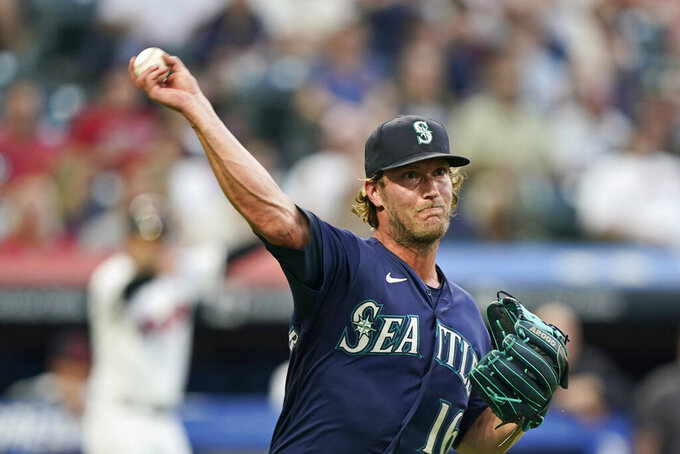 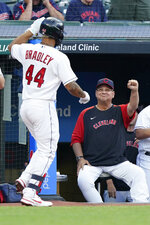 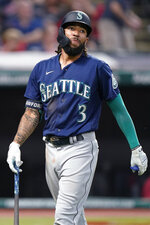 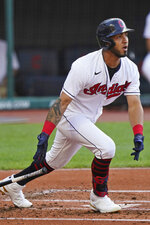 CLEVELAND (AP) — Aaron Civale felt miserable the past few days, suffering with allergy symptoms. The Mariners didn't cause him any problems at all.

Civale gave up a single to start the game before dominating Seattle's light-hitting lineup for eight innings, leading the Cleveland Indians past the Mariners 7-0 on Friday night in front of the largest crowd at Progressive Field since 2019.

Civale (9-2) allowed J.P. Crawford's leadoff hit — a grounder that just got past second baseman César Hernández's glove — and nothing else to become the first AL pitcher with nine wins. The right-hander, who turns 26 on Saturday, struck out a career-high 11 and retired 22 in a row after loading the bases in the first.

Afterward, Civale said he hasn't pitched much better, but he has certainly felt better.

“I’m kind of under the weather the last few days,” he said. "Some allergies going on. But I’ve thrown some of my best games when I haven’t been feeling my best, physically. I think the focus tonight was probably the best I’ve had in a long time.

"That’s something I try to carry into each and every start.”

The Mariners, who have been on the wrong side of two no-hitters this season, came into the series batting an MLB-worst .209. Civale made them look foolish with a nasty curveball that locked up hitters.

“We knew that was his pitch,” Mariners manager Scott Servais said. “We just couldn't do anything about it.”

Cleveland's Bobby Bradley homered in the third off Justin Dunn (1-3) and Amed Rosario had four hits for the Indians.

The series opener was the first game in which capacity attendance was allowed at Progressive Field since before the COVID-19 pandemic, and 22,970 fans came out for the Mariners, $1 hot dogs and fireworks on “Opening Day 2.0.”

Civale and the Indians didn't disappoint their fans, who still aren't sure what to make of this young team that can look lost offensively and relies so heavily on its pitching.

Cleveland has hit plenty enough for Civale, who improved to 15-0 when his teammates score at least three runs.

The crowd was festive, breaking into the wave and cheering every strikeout by Civale.

"It’s really nice to have that back. Just have awesome fans here. That’s what we play for.”

The Indians pounced on Dunn right away, scoring three times in the first.

Eddie Rosario had an RBI single, Dunn walked Bradley with the bases full to force in a run and Josh Naylor made it 3-0 with a single. The Indians could have done more to Dunn, but Rosario was thrown out at the plate by center fielder Dillon Thomas.

José Ramírez's run-scoring single put Cleveland up 4-0 in the second.

Bradley, who was recalled from the minors last week, continued his hot start by connecting for his second homer in 11 at-bats. He later added an RBI single and is batting .462 (6 for 13) with six RBIs in six games since being called up.

“All those starry-eyed moments are gone,” he said. “I see myself as one of these big leaguers now. It’s not like, ‘Oh my God, this is my first time’ anymore. It’s just, ‘Now it’s time to put my head down and work.’”

Bradley didn't make the opening day roster despite outplaying Jake Bauers, who was designated for assignment by the club last week and traded to Seattle on Thursday.

Quickly back in Cleveland, Bauers went 0 for 3.

Indians catcher Austin Hedges was drilled in the helmet by Dunn in the third.

Hedges collapsed to the ground and stayed on his back in the dirt for nearly two minutes while being checked by manager Terry Francona and a trainer. Hedges stayed in the game before being replaced in the fifth as a precaution.

“He’s passed all the tests,” Francona said. "We’ll certainly monitor him through the night and when he comes in, but so far we think he’s OK.”

Seattle got back its top reliever as Kendall Graveman was activated after a COVID-19 scare.

The right-hander had been out since May 23, and spent two weeks quarantining in San Diego. Before he was sidelined, the 30-year-old recorded five saves and didn't not allow a run in 16 2/3 innings over 14 appearances.

Mariners: Due in part to injuries, Seattle has used an MLB-high 51 players already this season.

Indians: RHP Zach Plesac began throwing this week as he recovers from a broken thumb, suffered when he angrily pulled off his shirt following a start. Francona said Plesac has been attacking his rehab as the club expected. “Knowing Zach, probably have to help him pump the brakes a little bit," he said.

Indians RHP Triston McKenzie (1-3), who has bounced back and forth from the minors, will be recalled from Columbus to start against Seattle's Yusei Kikuchi (3-3).